The very first menko I owned were from the 1958 Dash 7-8 set, but little did I know when I bought a box of them that I truly did have a complete basic set (12 menko total in the basic set, 36 menko in master set).  In fact, I really didn’t stumble upon the fact until I started documenting sumo menko sets.  Since that “fateful” day in Japan, I’ve documented hundreds of sets and thousands of menko, but the 1958 Dash 7-8 Set will always be my favorite.  I’m going to give a quick rundown of the set and then “break” my box of Dash 7-8 open and see how the box was stacked and collated from the factory!

To this day, I still have yet to discover or find a manufacturer of the Dash 7-8 set, but this is not uncommon for many menko sets.  If I had to take a quick guess, slightly more than half of the documented sumo menko sets have unknown manufacturers.  Unfortunately, the quest to find the true manufacturers will only get harder and harder as the years go by and many will probably never be identified.  Regardless, the Dash 7-8 is a nice set in terms of production quality and content.  The set has very vivid colors and great images of the rikishi.  Most of the menko are nicely centered and the only complaint with the printing is the red color sometimes is seen with a bad register.  This can lead to a funny looking mouth with a red mustache or the red of the lips down where the chin is.  It’s very minor, though, and doesn’t detract from the overall appearance of the set.  The back has a nice and simple design to it.  The shikona is vertically in the middle of the menko with a Gu-Choki-Pa mark above it.  On the right side is the rikishi’s height and on the left side is the rikishi’s weight.  At the very bottom is a 7 or 8 digit Fighting Number and all this information is surrounded by a dashed border.  They are great looking menko all around.  The one interesting feature to this set is there were gold-inked menko sheets that children could win if the pack they bought had a red winning stamp on the back.  Four levels of prizes existed.  A #3 stamp on the back would win you a 3-menko gold inked sheet.  A #2 stamp would win you a 4-menko gold inked sheet and a #1 stamp would win you a 5-menko gold sheet.  There is supposedly a “Grand Prize”, but I am still investigating what that is.  Up until a few years ago, I had never seen what the stamp looked like, but it is a simple red number stamped on the back.  There were two types of menko issued; one with a blue back and one with a green back.  Blue backs are much harder to find than green backs, but gold inked green backs are the hardest of all to find.  The fact that I’ve never seen a gold-ink green back is an indication of their rarity. 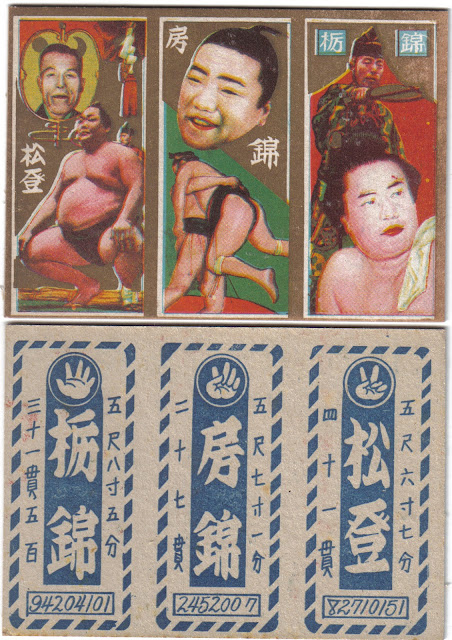 The set contained the top rikishi of the day and was printed at the very end of 1958 and, unfortunately, the two more dominating yokozuna of the 1950s, Chiyonoyama and Yoshibayama, are absent from the set.  This set also has one of Yokozuna Kagamizato’s last menko in it as well as the up and coming Yokozuna Wakanohana and Asashio as ozekis.  All in all, of the 12 menko in the set, 8 are from the sanyaku ranks while 4 are from the maegashira ranks.
Let’s take a look at what exactly came in a box of the Dash 7-8 menko.  The box itself is interesting as it explained what exactly children could win if they pulled a winning stamp.  Also written numerous times all over the box are “Gold Print”, “Special Prize”, etc….  However, no indication of the manufacturer appears on the box.  The box measures approximate 8” long, 5” wide and 1” deep.  It is sealed by a piece of twine and when you open it up there are approximately 100 4-menko packs wrapped in a fine tissue.  On top of all those packs are the gold-inked prize menko that children would win.  Interestingly enough, there is no prize sheet to attach them to as was done with many sets that used this type of prize structure.  Each individual pack contains the same 4 menko, but was sealed in such a way that you couldn’t see which rikishi you were buying or any of the winner stamps.  I cheated and used a pair of tweezers to slide the middle card up slightly out of the wrapper to see which rikishi it was and then slid it back down.  Here is how the set broke down as sealed from the factory:

This is an intermediate set to build and definitely a challenge to build from the single menko that seldom appear on the market.  What is even more challenging and fun is to try and complete a set in both green and blue backs along with the gold ink menko.  For all the sumo menko collectors out there, thanks for tuning in and until next time….cheers!
Posted by SumoMenkoMan at 9:36 AM 1 comment:

This is the time of year when BBM releases their annual sumo wrestling set as well as the time of year when many shops and collectors start unloading their old stock of the previous years issue as well as older sets from the late 1990s to early 2000s.  These can usually be had for a fraction of the original price so I usually wait a year or so to pick up the "latest" set.  All images for this blog I've borrowed from the internet (I've noted where I copied them from).

The 2016 is just a moderate refresh of the previous years sumo cards with the same subsets and more-or-less the same content flow.  However, this is the first time in 13 years that the number of cards in the regular set has changed except for the 2013 Legend Glory Set and 2015 Legend Treasure Set (both 72 cards).  The 2016 regular set is complete at 90 cards when in the past this number has been 99 or more.  This year also has a 10-card autograph special set, but unfortunately has sticker autographs instead of on-card autos.  Each box contains 24 packs with 5 cards per pack.  A pack runs 300円 or 7200円 for a full box which is standard pricing for the sumo sets.

The 90 cards in the regular set are broken down as follows:

Beyond this there is nothing new to mention about this set.  There is no indication that BBM will issue a special set like they did in 2013 and 2015.

This is a great set that mixes vintage and modern designs and is actually very difficult to find. Back in 2002 for 1500円 + tax you could get this set which comes in a cardboard sleeve package.  The most notable name in this set is then Sekiwake Asashoryu who, until he started getting in trouble with the Sumo Association and eventually retiring early, was on his way to breaking the all time tournament win record.  That has since been eclipsed by Yokozuna Hakuho, but Asashoryu was truly a great rikishi to watch in the ring and he definitely had a presence about him.  The other big name in the set is American Henry Miller who managed to break into the top division for just a few tournaments one of which coincided with the release of this set. 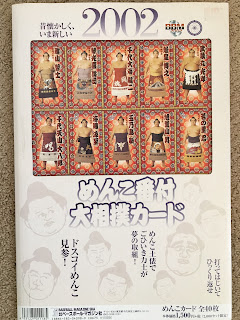 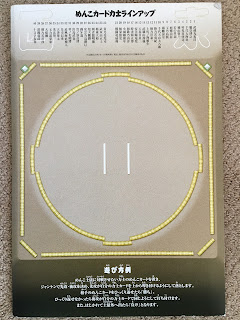 There are 40 menko in this set and all measure approximately 1.25" x 2.75".  They are secured on a solid cardboard backing and once popped out, the backing reveals the rank of the rikishi. 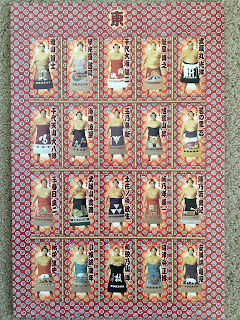 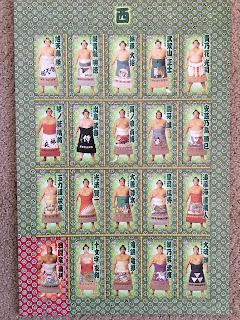 The front of the menko shows the rikishi in their kesho mawashi as well as shikona.  The color of the menko indicates which side of the banzuke the rikishi is ranked (January 2002 tournament in this case).  Red indicates East and Green West.  The back of the menko is filled with statistical information about the rikishi such as total wins, birthplace, height, weight, highest rank, etc...  Each is numbered from 1-40 in the upper right corner.  I have only seen one set of these in the past 3 years when I first found out about the set and of course I had to buy it since I figured it would be a while before I found another one. 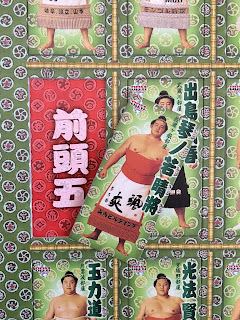 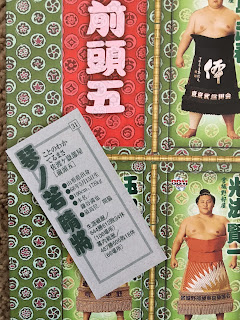 Pick this set up if you can!

Posted by SumoMenkoMan at 3:21 PM 5 comments: