This is the last post on my 2017 Japanese BBM Infinity Box Break.  You can see the results of my first and second box breaks by clicking on the links.  This part will only be 4 packs long.  One unopnened pack is going to fellow BBM sumo enthusiast Paul for his unopened box collection and another unopened pack is going to longtime blog reader Fuji for his Japanese collection.

Pack 15: Starting off to bat...pun intended...is an 80% baseball pack including another Brilliant Athlete.  Some old school soccer in here as well. 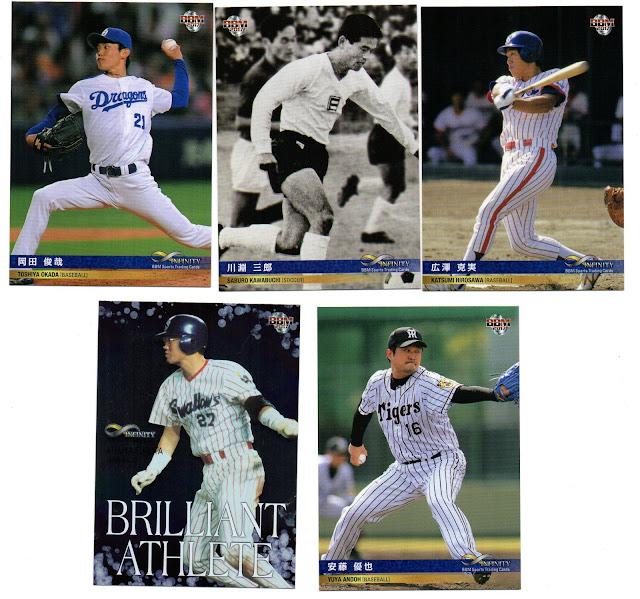 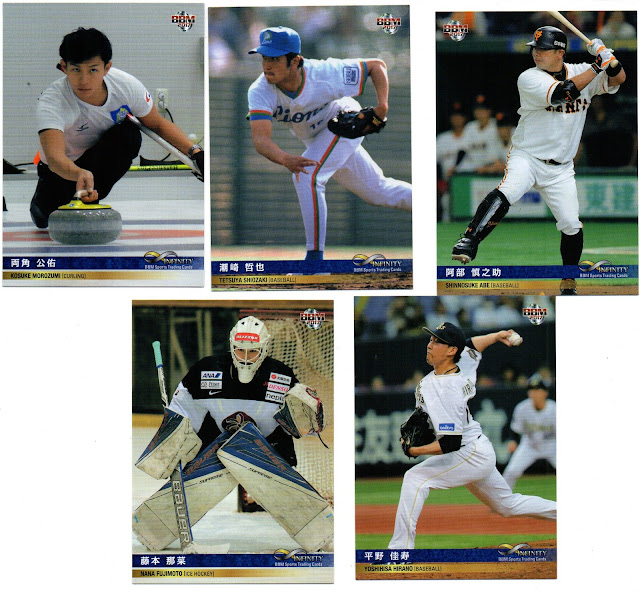 Pack 17: Nailed some more sumo (Onokuni...aka...the Giant Panda) and another bodybuilder.  I wonder if they will ever do a boxed set of these someday....it wouldn't surprise me. 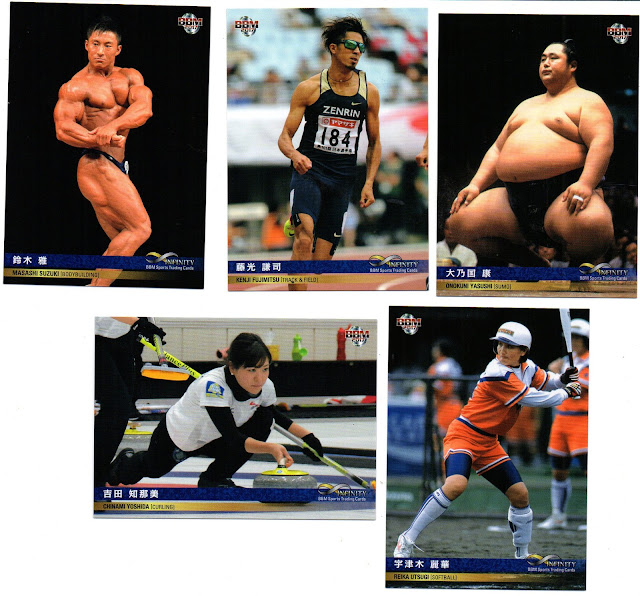 Pack 18:  Back to back Onokuni, but I nailed an Ohtani baseball card! 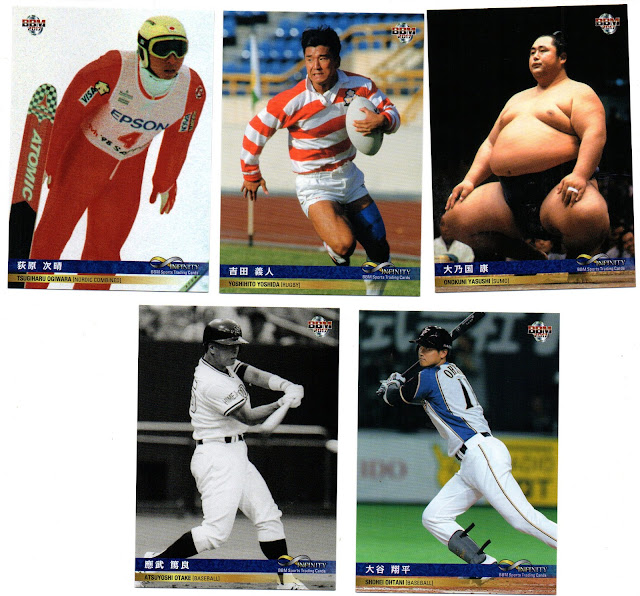 Overall impressions:  I like this set and I really like the variety of athletes they used.  Baseball tends to dominate and it did in this set as well.  Also, who can complain about on-card autos??!!  The athlete actually touched the card as they were writing on it.  Way to go BBM.  Although I can't say all the autos are on card.  My two biggest complaints are the lack of imagination on the front and back images (they are the same).  This has been my biggest complaint of BBM in recent years.  Also, the production quality is subpar.  I felt like a good majority of my cards did not look mint coming right out of the box.  There were corner dings as well as bubbles in the surface of some cards.  Baseball fans might be justified in buying a box, but it is quite an investment for fans of other sports as you only get a sprinkling of cards.
Posted by SumoMenkoMan at 3:00 AM No comments:

This is a continuation of my first thread where I opened 7 packs.  Here are the next 7 packs.  Let's hope I can get some more base sumo cards.

Pack 8:  Some freestyle skiing love in this pack.  I might be entering the double realm soon. 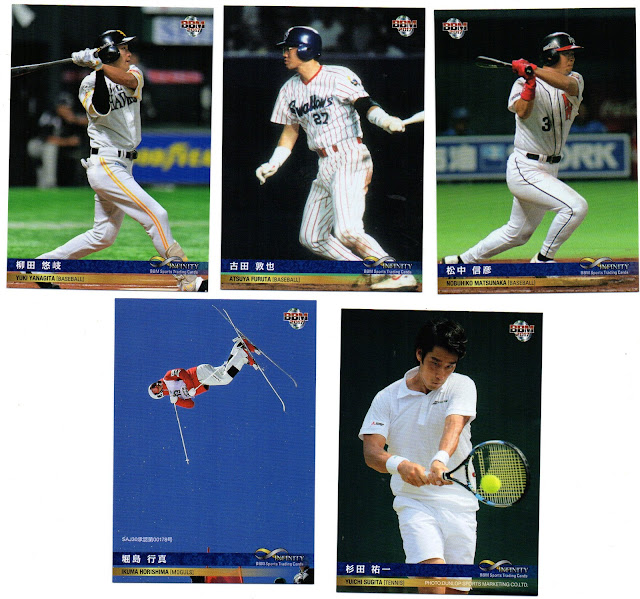 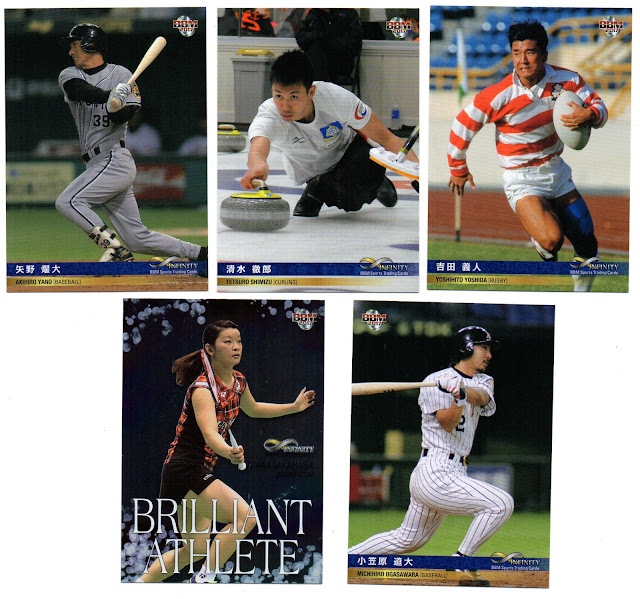 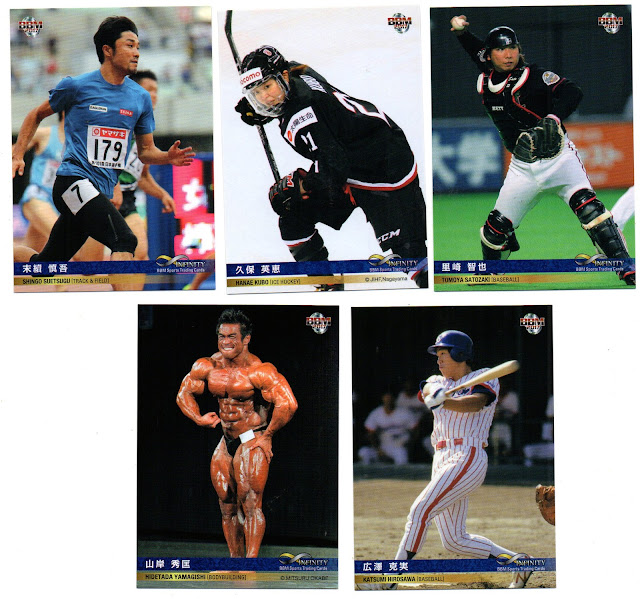 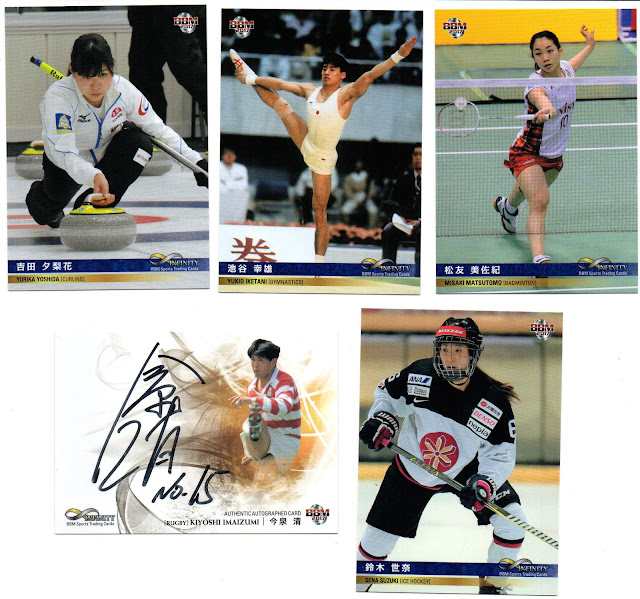 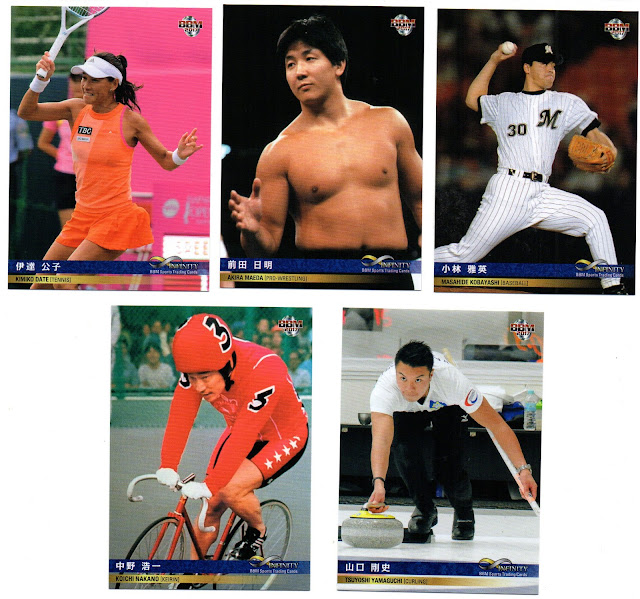 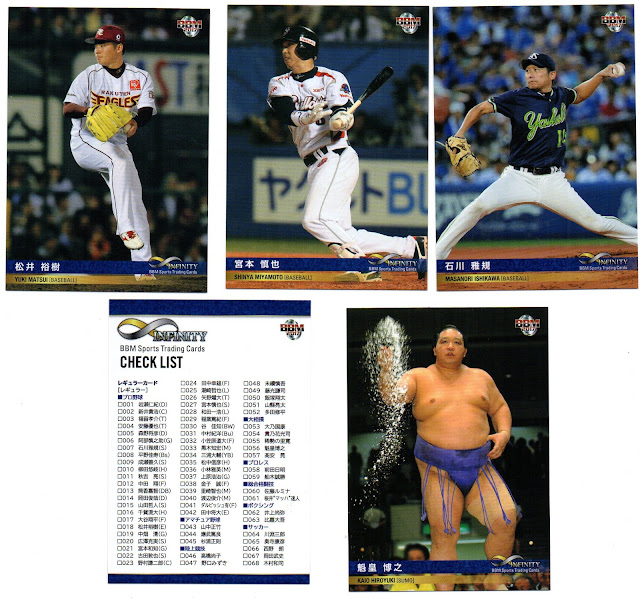 Pack 14: Another Brilliant Athlete badminton insert card.  Must be a badminton hot box!!! 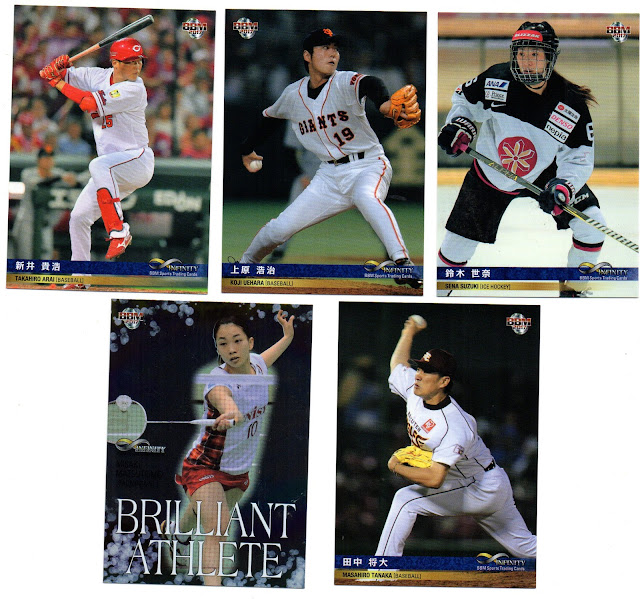 Definitely a great 7 packs.  I'll open up the last packs in the next few days.
Posted by SumoMenkoMan at 3:00 AM 2 comments: 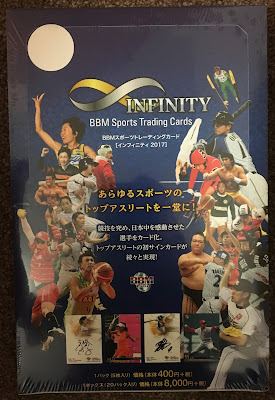 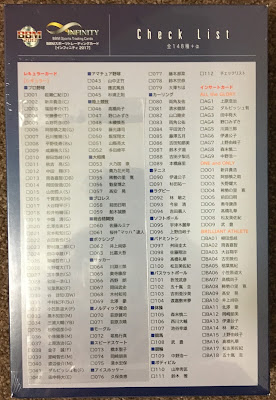 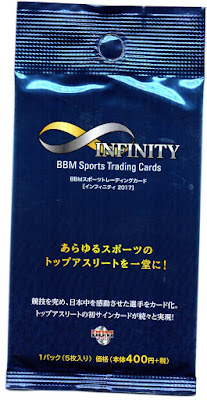 BBM just released another multi-sport set called Infinity.  For those that bought the Masterpiece set last year, Infinity falls right in line with that.  This set has mostly baseball players (42) along with a variety of other sports including Curling, Speed Skating, Ice Hockey, Pro Wrestling, Tennis, and Badminton to name a few.  Some of the players are still active while others have been retired for a while.  Most importantly for this blog are the 5 sumo wrestlers that are included in the base set along with a few sprinkled in insert sets.  This is an All-Japanese set so you likely won't find many names that you recognize unless you follow a particular Japanese sport.  There are 112 cards in the Base Set along with 4 Insert Sets: a 9-card All the Glory set, a 9-card One and Only set, an 18-card Brilliant Athlete set, and a large autograph set.  I believe the Brilliant Athlete set also has foil-stamped facsimile parallels in it.  Likewise, the One and Only set has holographic parallels #ed to 50.

I bought two of these boxes off of Rakuten and I am going to rip one here and keep the other one for a rainy day.  Packs come 20 per box with 5 cards per pack.  Let's keep fingers crossed for some sumo cards! 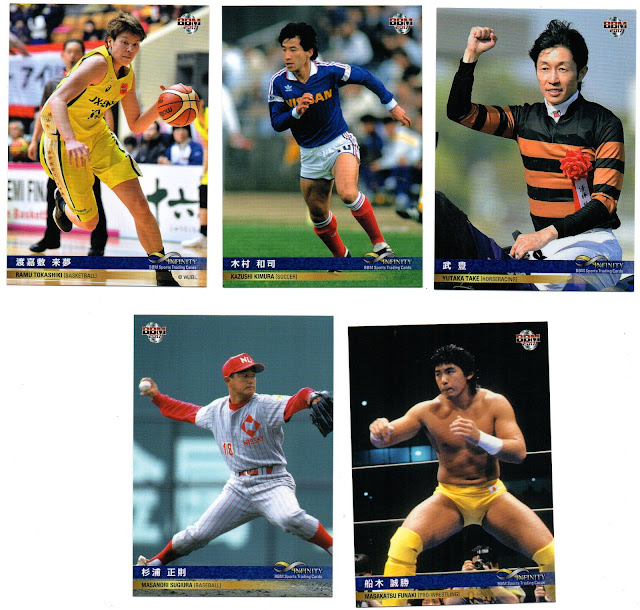 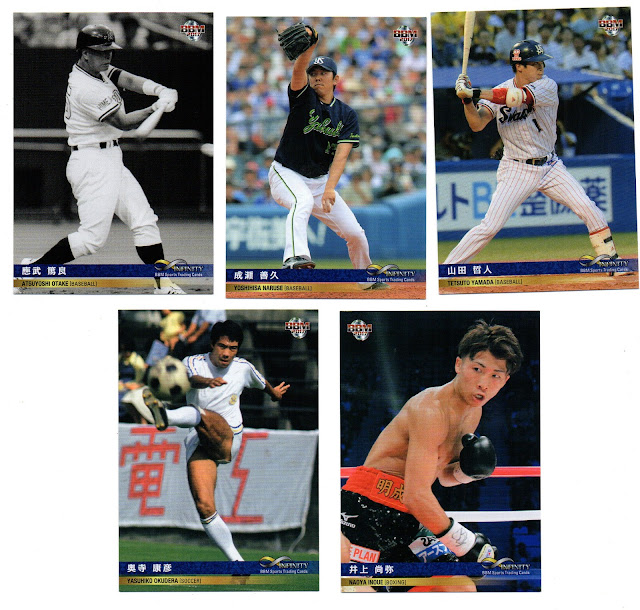 Pack 3: Boom, my first sumo card....the cropping on this card is a little weird though 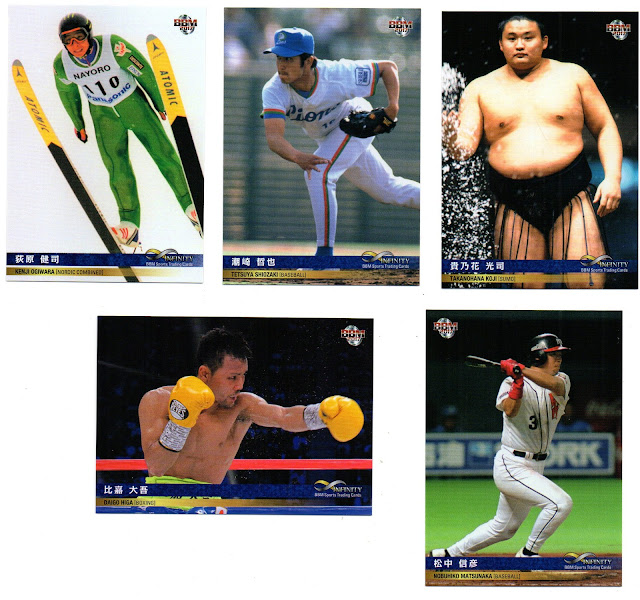 Pack 4:  An eclectic pack for sure and I snagged a Brilliant Athlete insert...Naoko Takahashi.  Awesome to see a female hockey player too. 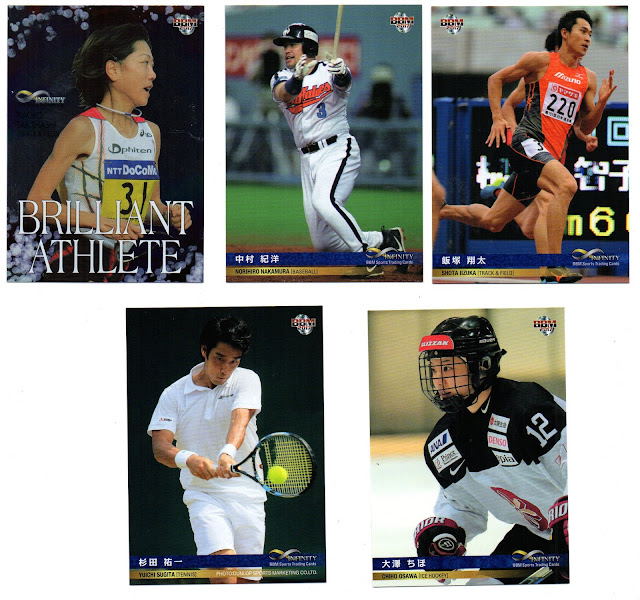 Pack 5: Another sumo wrestler...Kisenosato.  This is a Speed-Skating heavy pack. 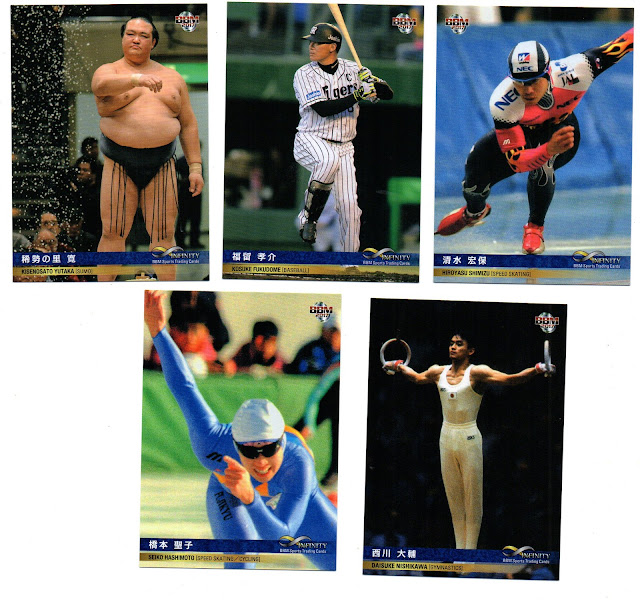 Pack 6:  Some old school images here and another speed skater. 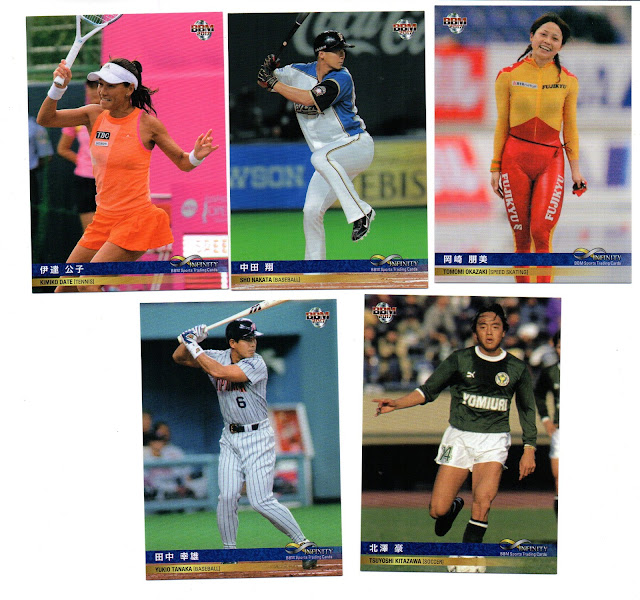 Pack 7:  MMA, Curling, and Baseball all in the same pack!  I love this set. 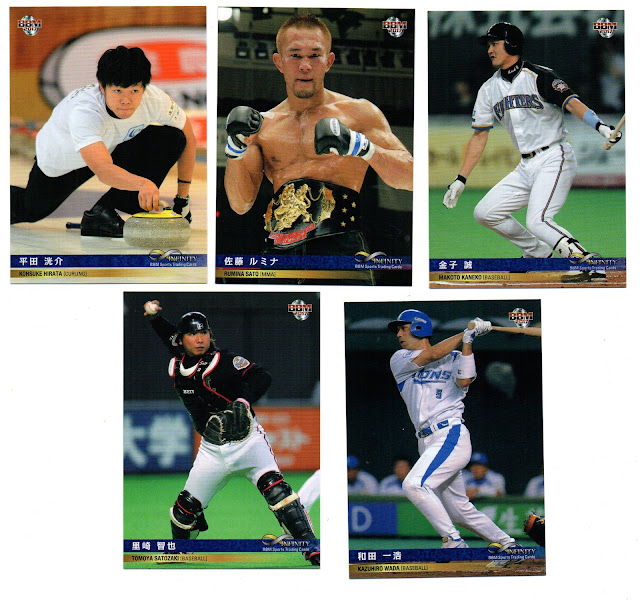 I'll bust another 7 packs and post in the next few days.  Until then...enjoy!
Posted by SumoMenkoMan at 12:24 PM 6 comments:

The Nihon Sumo Kyokai (NSK) has ran a fairly stable professional sumo organization for about the last 90 years.  Before 1926, however, there were actually two professional sumo associations in Osaka and Tokyo competing for wrestlers and a cut of the sumo pie.  Menko sets produced during this era would actually include wresters from both of these organizations which can make identification and cataloguing a challenge; especially when the menko are not marked with any sort of affiliation.  Fortunately, this 1912 set has both the Osaka (大坂) and Tokyo (東京) designations.  I have only seen these three examples from the R121: 1912 Rikishi 0 Set so the date could be plus or minus a few years.  These are gorgeous examples of a woodblock-printed set with vibrant colors.  Each menko is printed with 4 colors and has the name of the wrestler on the front of the mawashi.  The backs have the wrestler's rank, height, name, and association listed in black ink.  This particular set also has varying amounts of parallel red lines across the names on the back.....which I am not sure mean.  They measure about 2" x 2.75" and are on a somewhat thin paper stock.  Hopefully more of these pop up someday to get a more complete checklist, but for now here are the three: 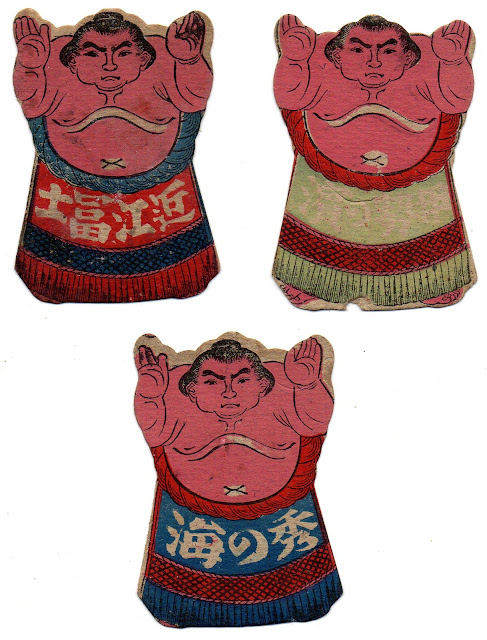 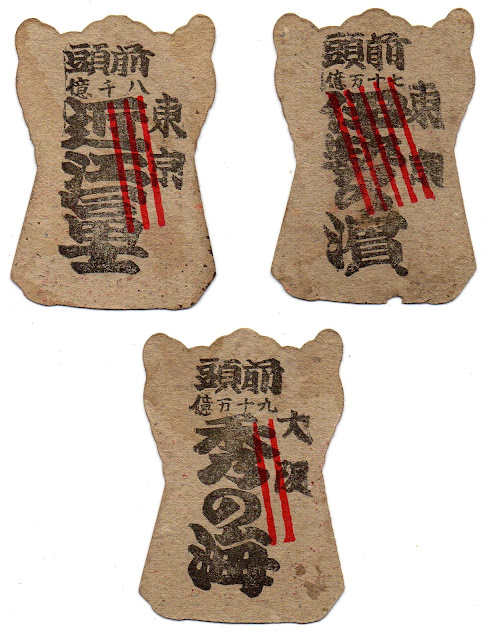 Posted by SumoMenkoMan at 7:44 AM 3 comments: