Fuji is the ever-generous gifter throughout the sports card blogging community.  He recently shot out 33 care packages and I was on the fortunate receiving end of one of them.  Like the other 32 recipients of these postal gold mines, I am deeply honored and very surprised with how well Fuji creates these.  He knows everyone's tastes and collecting passions.  Fuji doesn't collect sumo wrestling cards, but this package nailed a bunch of awesome cards for my other collections.  Let me dive in a bit more: 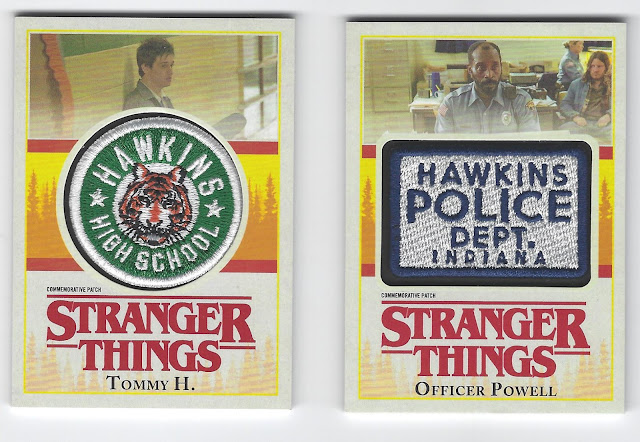 2018 Stranger Things Season 1 Commemorative Patchs Tommy H and Officer Powell.  These came one per blaster box and Fuji sent them my way to fill in some holes.  I am slowly working on this 24-card insert set. 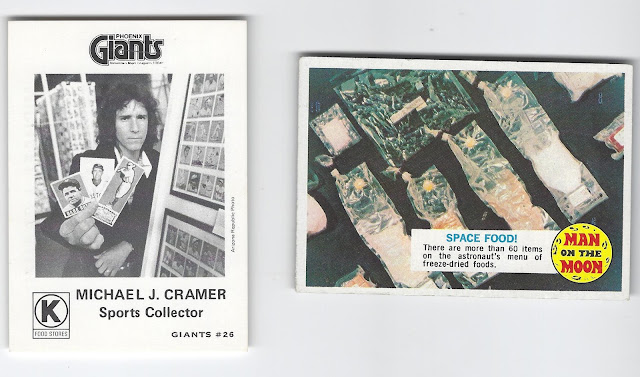 1975 Phoenix Giants Michael Cramer and 1969 Topps Man on the Moon #48B Space Food!  Michael Cramer was an amazing part of our hobby since the 1970s and started the Pacific Trading Card Company.  He is also an NFL photographer and an all around legend in the hobby.  Rich Klein did an excellent article about him back in 2013.  The Man on the Moon set is one that I would love to complete as I am a space nut!  But thanks to Fuji, I am one less card away! 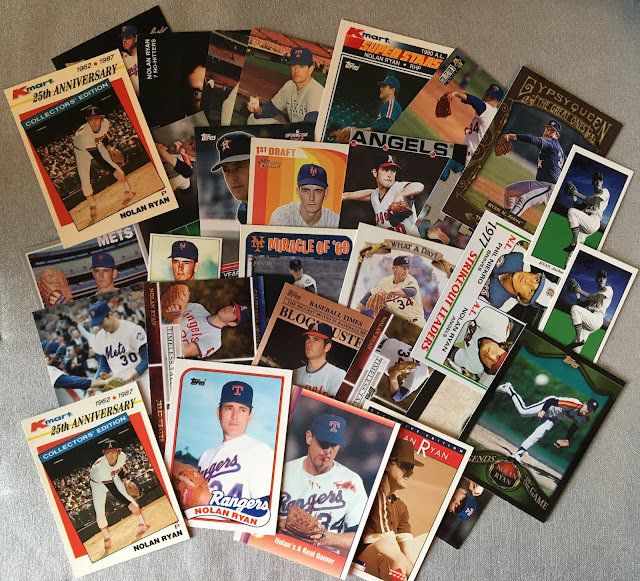 A pile of 1980s to modern Nolan Ryan cards!  As a kid I collected Nolan Ryan like tens of thousands of other kids and adults.  The 1994 baseball strike, college, and companies producing too many cards to enjoyably collect and drove me out of the hobby back then, but I recently pulled out my Nolan Ryan collection again and want to fill in some holes.  Fuji loaded me up with enough goodness to keep me busy for a while! 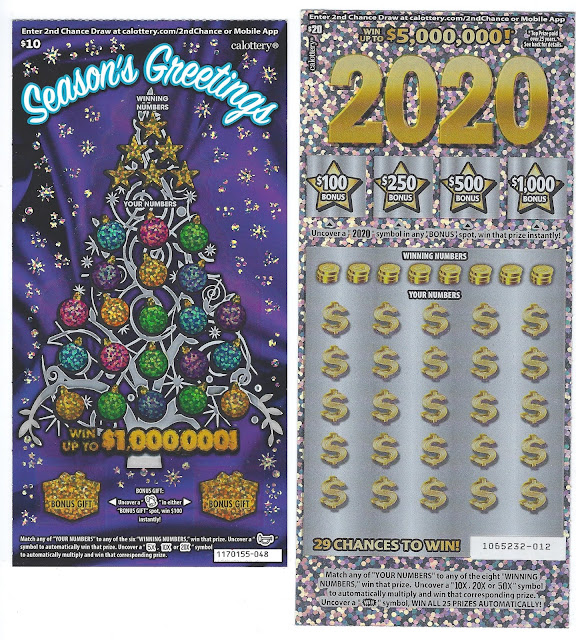 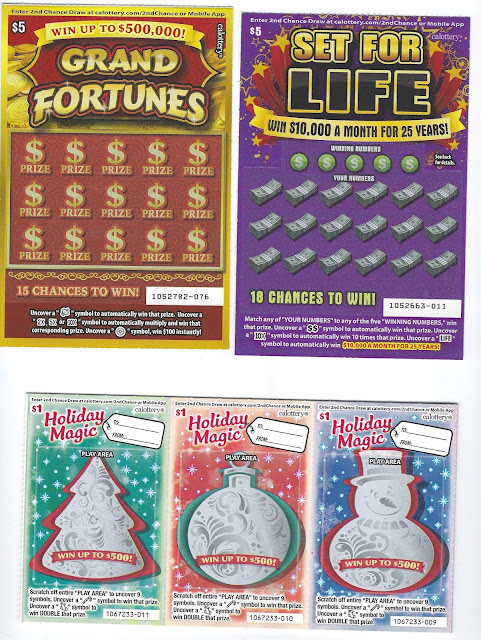 California Lottery Scratchers.  Last time we met, Fuji and I gambled a bit of our card show money away on CA Scratchers....he is keeping the tradition alive between us for a bit longer.  I am going to slow roll these over the course of a week or so, but the few that I have scratched haven't led me down a path to retirement yet.

Fuji, I can't thank you enough!!  Fuji for President!
Posted by SumoMenkoMan at 1:10 PM 11 comments:

A lot of my friends and family are actually celebrating Valentine's Day on Saturday this year since yesterday was a workday.  Us too, we are heading out to our favorite happy hour joint later today.  So I consider this Valentine's Weekend as a whole.  And like many other bloggers, I feel like I should get up a Valentine's Weekend post.  Today I highlight the 1959 3-Part Trump Set (Catalog #G591).  These awase "matching" sets are popular even today since a host of games could be played with them.  We see a variety of them in the United States as kids games.  Most commonly, they are used in Japan as playing cards, or trump as it is known in Japan.  They are also used as a matching game where you put the cards face down and try to find the corresponding cards to form the wrestlers' image in this case.  There are 16 wrestlers total in the G591 set with 48 total cards coming in the box.....surprisingly, these sets are not all that uncommon and so you can pick them up here and there for reasonable prices throughout the year.    I pulled out the 4 wrestlers that bear the heart pips in honor of Valentine's Day to give you an idea.  Coincidently, these are the 4 highest ranked wresters in the set: Yokozuna Wakanohana, Yokozuna Asashio, Yokozuna, Tochinishiki, and Ozeki Kotogahama. 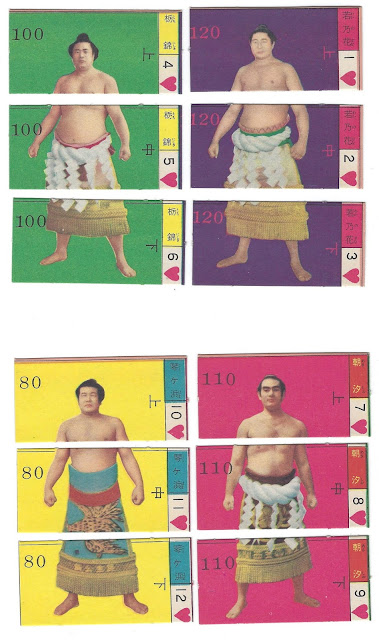 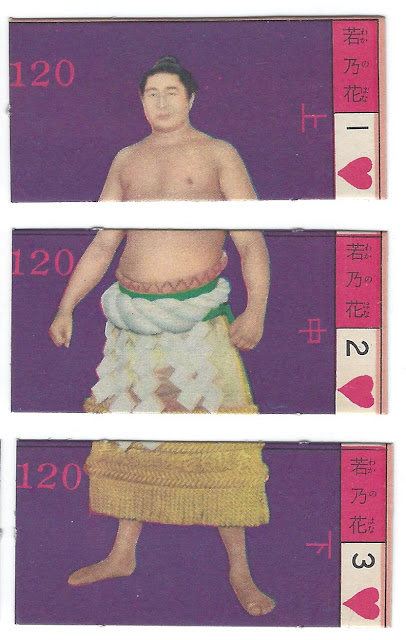 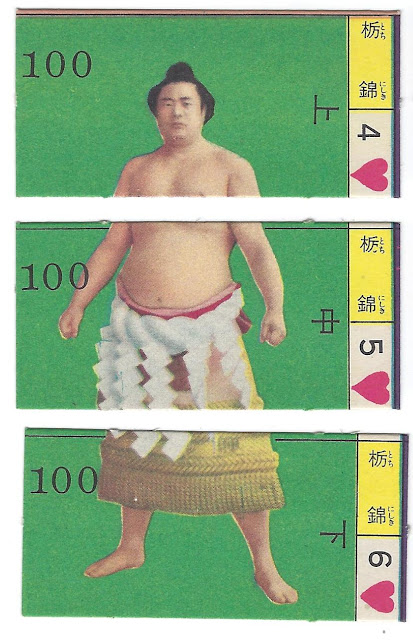 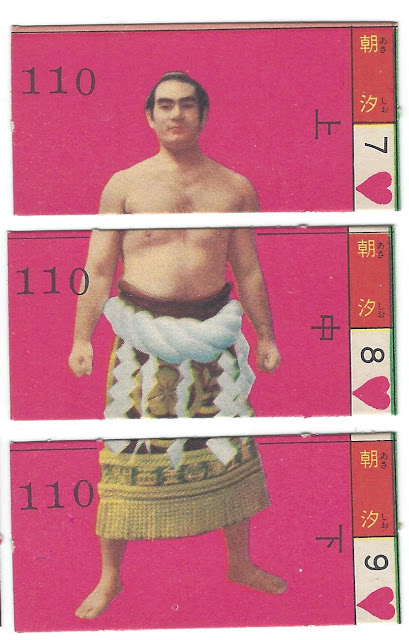 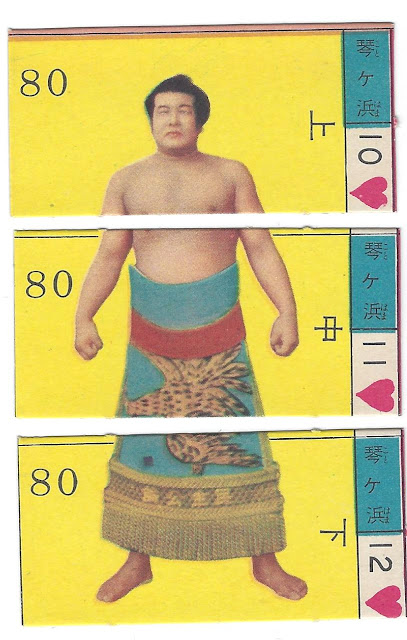 Recently, I stumbled across these somewhat unusual "cards" in the form of bookmarks.  Actually, they are bookmarks, but still a fun paper collectible.  I have only ever seen these four cards alluding to how rare they are.  I usually do an occasional search for sumo bookmarks and just happened to time it right for these to be at auction.  It looks like these were issued in uncut sheet that kids would have to cut out and were likely issued in kids magazines which were really popular in the 1950s. I love the black look on these.....pretty sharp looking which is why I picked them up.  Notice the uncut hole at the top where the bookmark string would go in...I'm wondering if the string came within the magazine as well.  Oh well, what do you think?  Anyone else collect oddball sports ephemera? 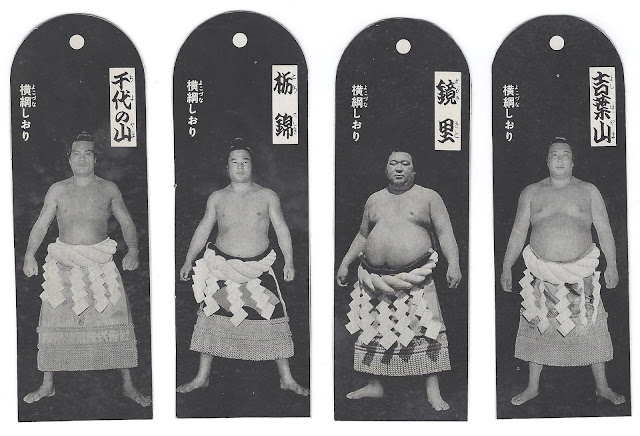 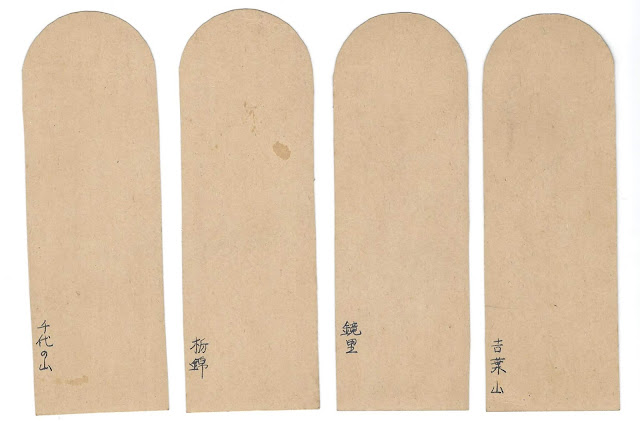 Every sport has a Greatest Of All Time (GOAT).  Baseball has Ruth, Basketball has Jordan, Hockey has Gretsky, Football has Brady, Soccer has Pele.....the list can go on and on for all the sports.  In sumo wrestling, the arguably GOAT is current Yokozuna Hakuho.  Here are a few reasons why he has been given this title by many fans...

I could dig up more statistics, but Hakuho's lifetime of achievment is staggering.  If these aren't GOAT statistics, I don't know what is.  He looks as if he could compete for 3-4 more years easily and be competitive in each of the tournaments he competes in.

For those that know me, I don't chase autographed cards...or at least go out of my way for any, but the one that I always would compromise on if I found it was a good, authenticated Hakuho signed card.  For reference, there are 4 ways to get authenticated BBM signed cards of sumo wresters:

In July 2017, Hakuho surpassed Ozeki Kaio for the most career wins (the record at the time was 1147 wins).  The Kokugikan and BBM collaborated to release a special signed 2017 Tamashi card where Hakuho wrote "1050 勝" "1050 wins" along with his signature on one of the Kokugikan-Signed cards.  One of my collecting buddies happened to have two of them and was thinning his collection a bit and I knew this was the card that needed to be in my collection.  I'm not sure how many of these are out there, but likely fewer than 100.  Regardless, the GOAT has touched and signed this card! 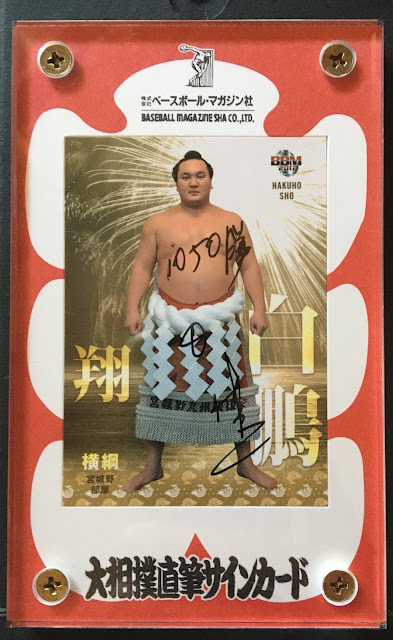 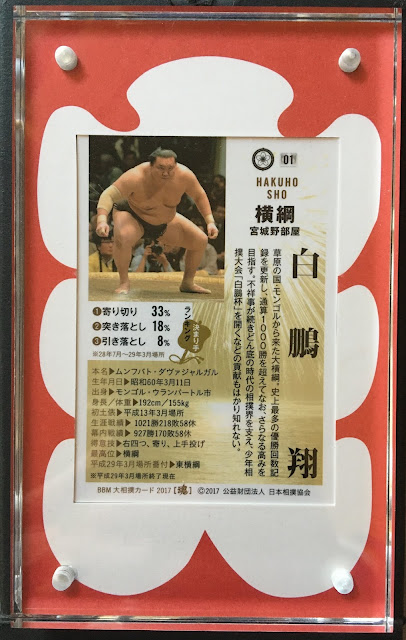 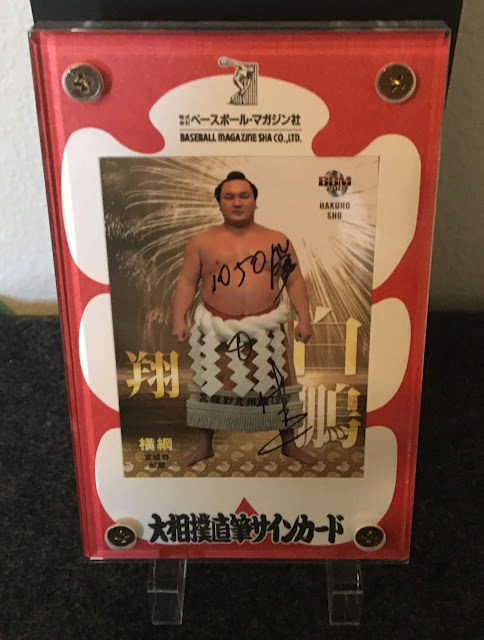 I hope everyone enjoys the Super Bowl!
Posted by SumoMenkoMan at 12:00 PM 13 comments: