Sumo Wrestling was fairly popular in 1976, the year I was born.  The major set that came out during this time was the 1976 Kodansha NST Stamp Set.  Here is a recap of the set I did about 4 years ago.

The 1976 Kodansha NST Stamp Set has had me intrigued for quite a few years mainly because it's been elusive and a difficult set to put together.  Single stamps from this 288-stamp set are almost nonexistent and packs and albums rarely come up for sale. If they do at all they are usually sold at a premium.  Unlike the baseball guys who have numerous stamp sets to choose from over several years, sumo collectors only have the 1976 stamp set so auctions will usually command high interest among collectors from around the world.

Stickers/seals/stamps became popular in the 1970s likely due to the success of the Panini brand from Italy.  The sumo stamp set was among numerous different subjects produced by Kodansha NST (more on Kodansha later) during this time including baseball, animals, trains, tv shows and even Guiness Book of Records.  All sets came with an album that cost 200円 and with packs that came 8 stamps to a pack for 50円 a pack.  I also have several "sample" packs that were given to stores to be used as promotional giveaways and the store owner had the opportunity to write in his business's name on the back of the packs to guide kids, and their money, his way.  These came 3 stamps to a pack.  The stamps are approximately 2" x 3".

The sumo set I own has been glued to the pages of an album aside from the handful of loose packs I've picked up along the way. Those will stay sealed....for now at least.  The front has a nice shot of Ozeki Takanohana who was extremely popular in 1976 and used on a lot of the packaging items(see below). 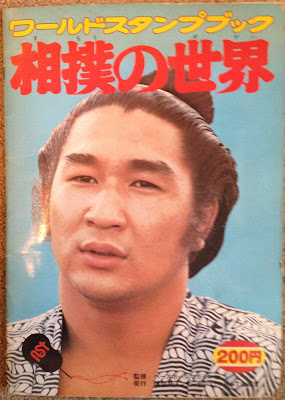 As mentioned in numerous blogs the stamps were intended to be glued into the album into their corresponding slot/area.  There is a little strip along the top where the glue was to be applied and so you could still flip the stamp up and read the tidbit of trivia and information that was usually printed there (see below with several open slots). 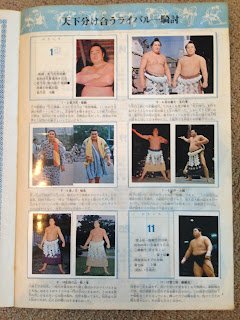 The set is broken up into 19 subsets, although none of the subsets are more difficult to complete than the others.


- Famous Tall Rikishi of the 36 Bales


- Jungyo Scenes in your Town


- Scenes from the Dohyo


- Famous Light Rikishi of the 36 Bales


- Famous Heavy Rikishi of the 36 Bales 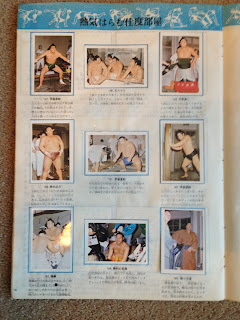 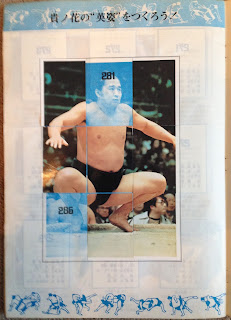 The back of the album had an order form for kids to order any single stamp for 7円 as well as a checklist as seen below to keep track of the individual cards they had.  This last page also explains the process for turning in 168 of your doubles for a special present.  What that special present is, I am not sure, but will have to do more research on that. 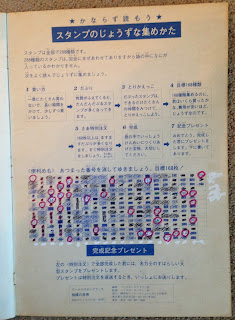 Here are scans of the front and back of a regular and sample pack. 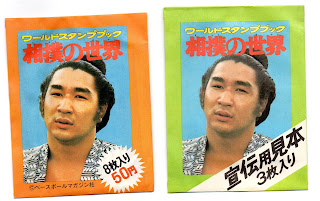 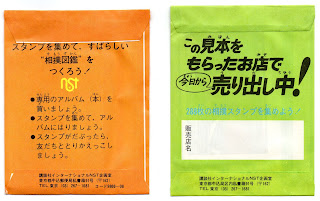 The auction I purchased also had a full size copy of a reproduction poster that would have hung in the window of the toy shop.  It's quite attactive and I only wish it was an actually original instead of a copy. 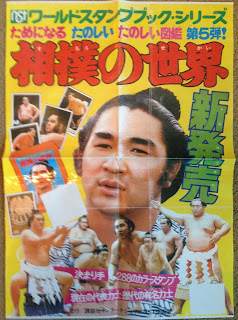 I was quite curious on the NST brand and did a 30 minutes search trying to research the company.  I came up empty handed and really started examining the album more for clues as well as look at other albums from the different subjects.  As it's written on everything, the sumo stamps (as well as baseball stamps) were manufactured under the supervision of Baseball Magazine Sha (BBM) and issued/published by Kondansha International NST Project Office.  Kondansha International was the English-language publishing house of Kondansha, but there are no clues to NST Kikakushitsu (Project Office).  So the chase was on and I went out and researched other kikakushitsu organizations.  It turns out all the references I found dealt with the publishing world in the form of "Modern Project Office", "Parenting Series Project Office", "Kobe City Project Office" and "Neko Project Office", etc....  All of these project offices released a distinct set of publications.  Clearly the NST Project Office had the authority to use their logo instead of Kodansha so my guess is NST was a division of Kondansha that was tasked to produce the whole series of stamp sets (approximately 15-20 by my estimate) during this era.  Likely NST stands for something like Nihon Stamp Team, Nihon STamp.  I'm hoping someone else will be able to weigh in on this as well.
Posted by SumoMenkoMan at 4:52 PM 6 comments:

Being cooped up with a school-age kid makes me really appreciate all the hard work and effort our Nation's teachers give and sacrifice on a daily basis during a "normal" school day.  With the shift to online learning throughout the country, the new and creative way that teachers are overcoming this "new" method of teaching is nothing short of epic.  Thanks to all of our educators out there!!

Back in 1941, right before World War II started (or at least between the U.S. and Japan), an unknown Japanese company produced this Math Back menko set in order to entice kids to buy them in hopes that they would not only play with them, but use them as a learning tool as well.  There are numerous examples throughout the 1940s and 1950s of Japanese companies doing this.  They are the precursors to flash cards it seems.  These three menko that recently came up for auction are the only three of this set I have seen in my close to 20 years of collecting sumo menko making them extremely rare.  This small lot features the great Yokozuna Futabayama (75/5=), the weak Yokozuna Minanogawa(27+5=), and the even weaker Yokozuna Akinoumi shown here as an Ozeki (50+4=).  Amazingly, these menko survived the air raids and destruction of the city they resided in starting 79 years ago.


Take care and good luck with all the home schooling and online learning!! 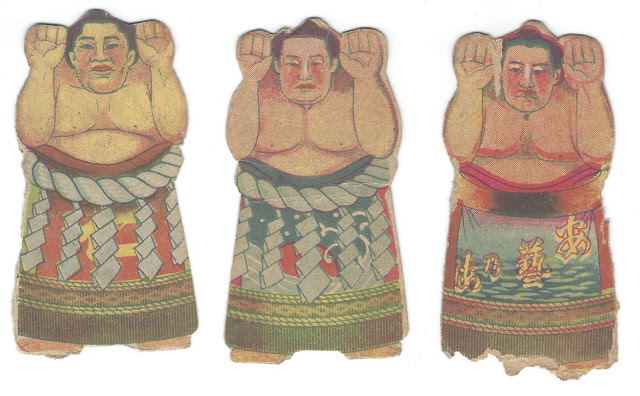 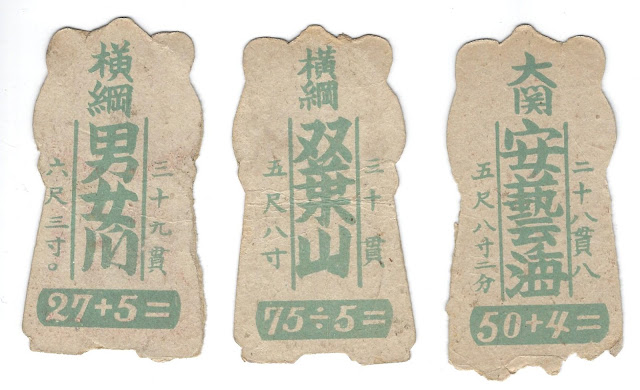 Posted by SumoMenkoMan at 1:00 PM 8 comments:

I was browsing through my scanned folders and came across this beauty...a 1988 Score Phil Neikro adorned in orange-outlined goodness.  A most deserved Hall of Famer who played for 4 teams across 3 decades.  Phil had the remarkable luck of being born on 1 April 1939 making this a perfect fit to share with the blogging world as well.  Everyone stay safe during this crazy month of April. 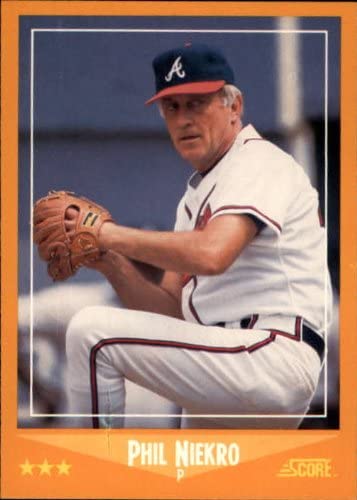 Posted by SumoMenkoMan at 4:00 AM 8 comments: