The Japanese card market continues to be unvalued and a goldmine of cards waiting to uncovered.  One of the genres of cards were marketed in Gacha, or capsule machines, with one of the most famous companies, Cosmos (コスモス), producing a majority of these cards in the early 1980s.  There were numerous cards for all interests: Pro Wrestling, Movies, Idols, and Sports Stars.  Since these were marketed really as inexpensive toys or products, the quality of the material and card stock tends to be fairly poor and consequently few survive and they are hard to locate.  Adding to the mix the lack of any definitive checklist and you have a recipe for excitement, intrigue, and a thrilling chase of discovery.  This small, three-card set from the 1980 The Empire Strikes Back movie definitely didn't disappoint and I was happy to be able to uncover and document them.  Measuring 2 3/8"x 3 5/8", this beautiful red-bordered set depicts the three main characters from the movie: Lord Darth Vadar (sp), Luke Skywalker, and Yoda.  If you were casually glancing at the cards, you might gloss right over the コスモス logo in the upper-right corner as it is difficult to tell that it is written in Japanese.  Also, the only card that has distinct Japanese writing is the Darth Vadar (sp) which has スターウォーズ written in bold-red letter in the lower-left corner.  Beautifully cropped, this set is a must have for the advanced Star Wars card collector. 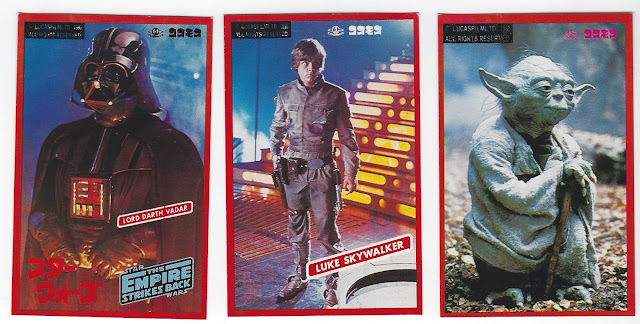 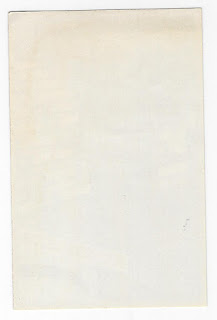 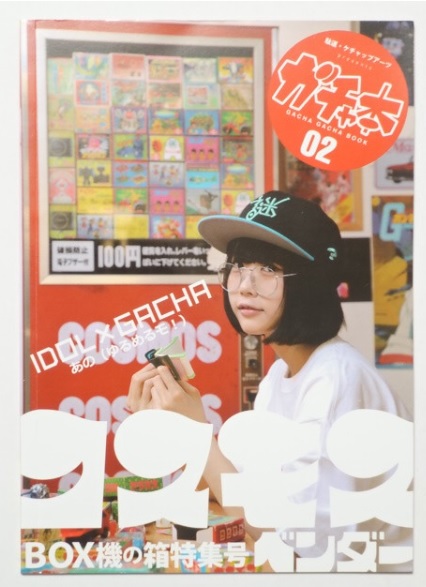 Believe it or not, Upper Deck made a sumo wrestling card set once.  Back in 2001, they made a 6-card tribute set for Yokozuna Akebono to celebrate his retirement which he had announced earlier on in the year.  The sumo world owed a lot of thanks to Akebono.  He helped usher in an era of popularity rarely seen in sumo.  He was the key rival to the extremely popular Hanada brothers (Yokozuna Takanohana and Yokozuna Wakanohana) and first foreign-born Yokozuna.  Akebono's 6'8" and 500 lb frame made him the tallest and heaviest Yokozuna in history.  This massive frame also became his undoing as his knees and body eventually couldn't take all the stress and Akebono decided to retire.  BBM (Baseball Magazine) cards have been the king of sumo wrestling since their fist set over 20 years ago, but the fact that Akebono was an American undoubtedly led to Upper Deck securing the publishing rights to make this set.  My understanding is that these were made to hand out at his retirement ceremony in the kokugikan on 29 September 2001.  The 6 cards are as follows:

The quality of this set is amazing with gold-gilding and great action shots, but it does look like the Japanese part of Upper Deck made the set with some odd translations and grammar.  Here is the Sumo World Magazine that show a photo of Akebono at his retirement announcement press event. 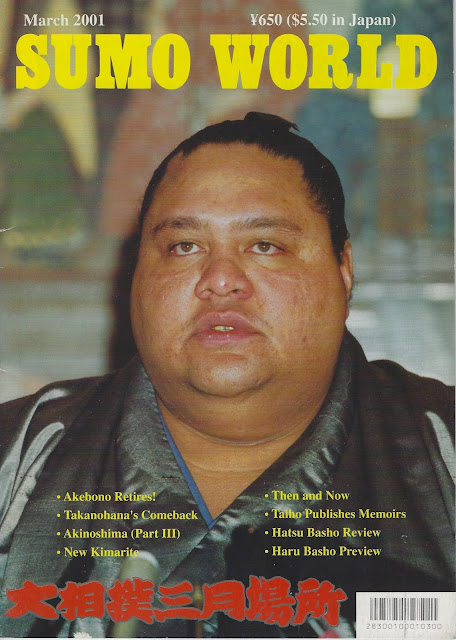 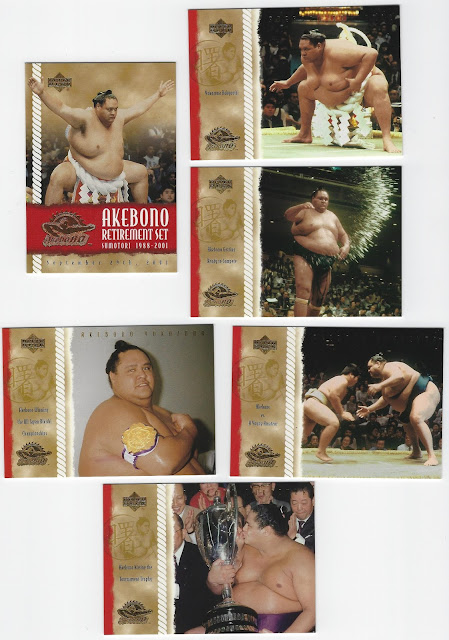 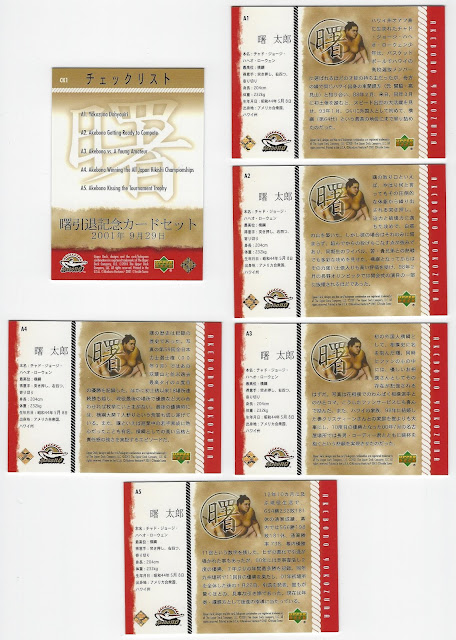 A day on the town with Fuji!

First off, if anyone ever has a chance to hang out with Fuji and Mike, take them up on the offer!  Fuji and Mike are super chill, great to hang out with, and have really good insights and conversations on sports cards!  Fuji pinged me a few weeks ago and asked if I was interested in going to the Frank and Son Collectible Show east of Los Angeles.  Heck yeah I was...a quick check with my better half and I was committed.  Regrettably, I was unable to attend the Dodgers game with Fuji and Mike the night before, but hopefully my rain check will be good for a while.  As soon as I arrived at the show's parking lot, Fuji was already bearing gifts and he handed me these sweet Yuta Tabuse cards.  The first being a sweet 2004 Skybox Limited Edition #34/35 in PSA 9 (my scanner doesn't do this card justice).  This die-cut card is only the second graded card I own and a real stunner!  Plus he hooked me up with this 2004 UD SPx Auto'd Rookie Jersey of Tabuse #1809/1999.  Both of these fill huge holes in my collection.  Thanks Fuji! 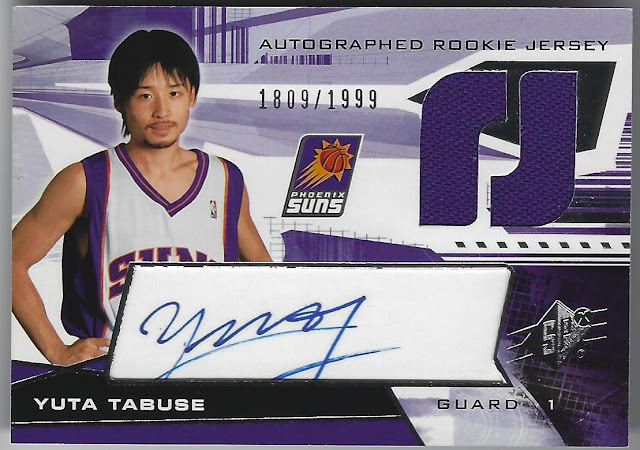 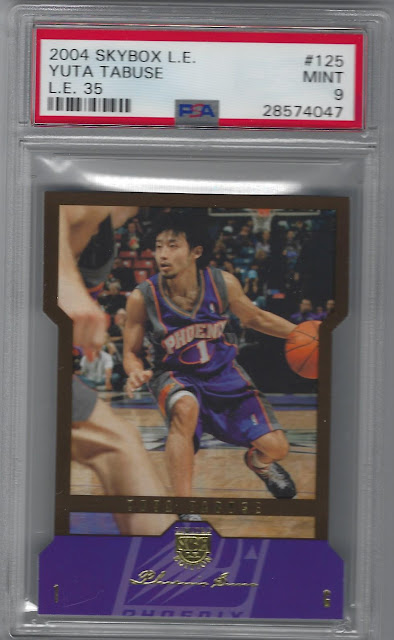 Fuji also brought a brick of the Round Tripper Licorice....yum!  For those of you who haven't tried it, check it out. 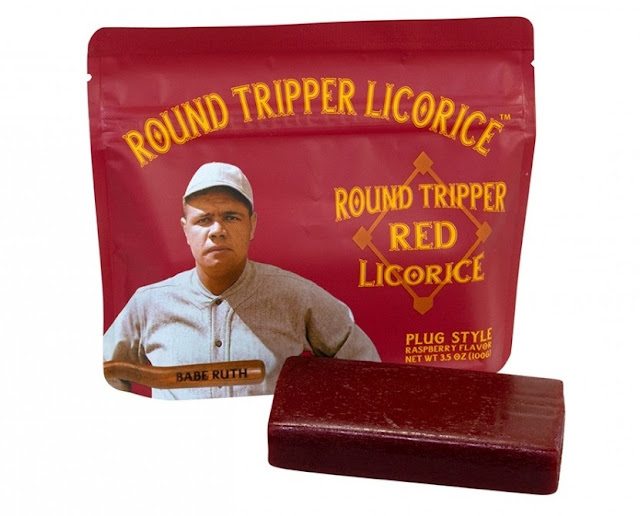 We entered and the experience was pretty amazing and hard to believe they have this show twice a week.  The show wasn't quite what we were expecting in terms of the number of sports card booths as they were swamped by the toys and collectibles arena, but I was able to walk away with these two non-sports cards for a buck.  The first woman in space, Valentina Tereshkova, and one of the most influential figures in military aviation, Gen Curtis LeMay.  I realized that I should have brought my NES game cartridge want list as I could have probably knocked off a few games as there were a good handful of vintage game booths. 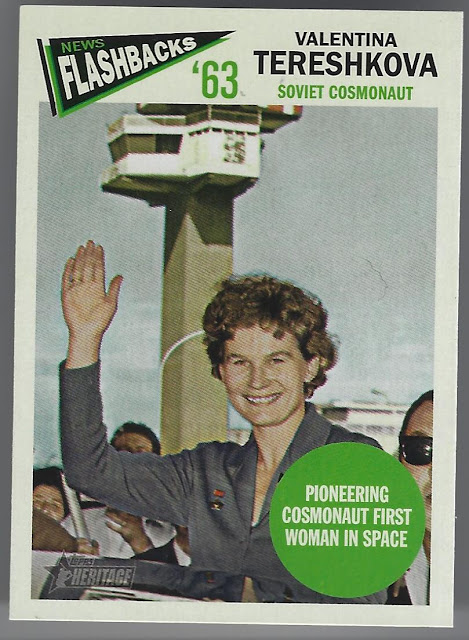 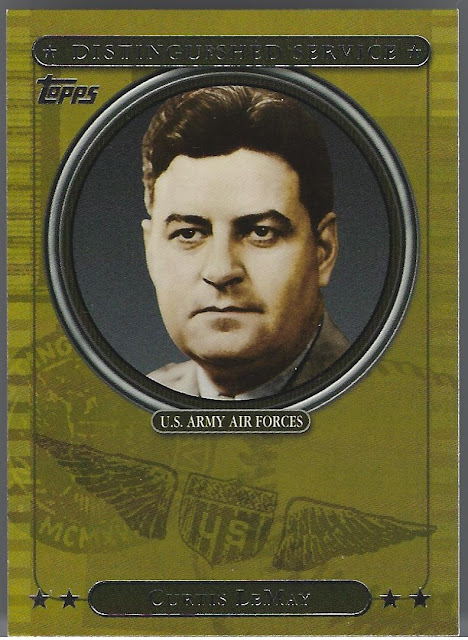 We weren't at the show for more than an hour before we headed off to La Verne, CA to hit up a local show.  Fuji found a few goodies there and hooked me up with this 2018 Panini Status Yuta Watanabe rookie. Thanks again Fuji. 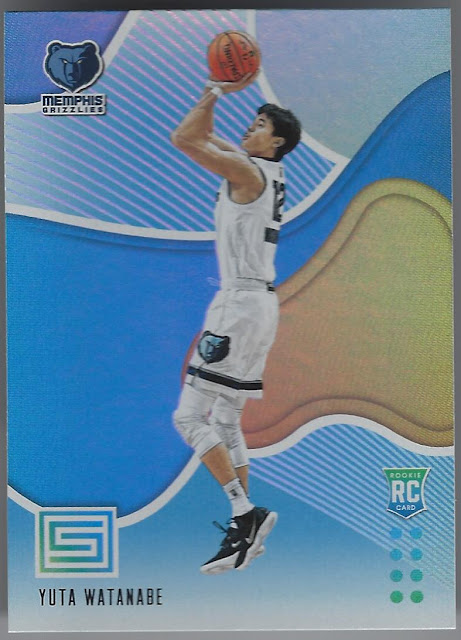 Seeing as how this was National Baseball Card Day we had to hit up one of the local participating dealers in the area and headed over to La Verne to A&N Collectibles to pick up our free pack of cards.  I'm keeping mine sealed, but Fuji surprised me again with a jumbo pack of Topps Chrome where I landed an on-card base auto Rookie Card of Jeffrey Springs from the Rangers.  I haven't heard of him, nor does it matter, this card will stay in my collection as a great memory piece of the day. 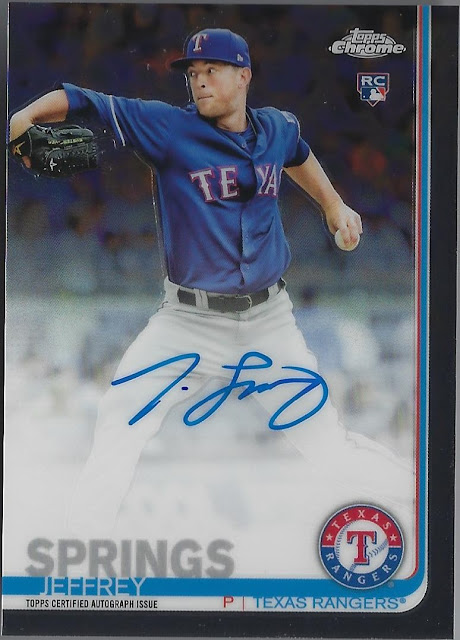 We still had a good portion of the day ahead of us so we ended up in downtown La Verne hitting up antique shops.  I snagged this really cool postcard set of US. Presidents.  They are hand-made with serigraph technology...which is very similar to silk screening.  Made by M.A. Sheehan from Topanga, CA, these date from the late 1940s to early 1950s since it still shows President Truman as the sitting president.  These are absolutely gorgeous both front and back.  A quick 10-minute search of the internet doesn't yield any examples of this set making me believe it is somewhat rare.  They are supposedly limited to 2000 sets and my set seems to be a mix of different sets as it has cards from set #19, #26, #27, and #303.  Would love to know if anyone has seen these before. 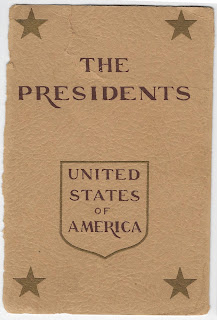 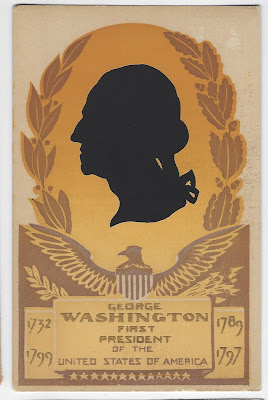 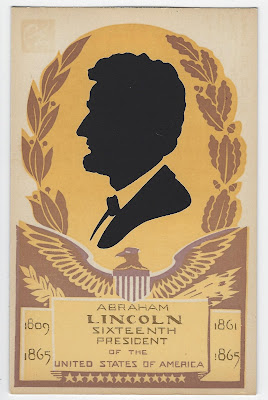 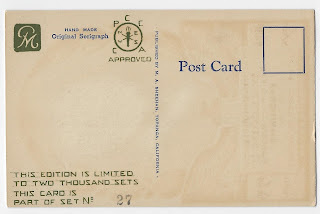 We ended the day with a quick trip to LaVerne Brewery where I grabbed a 4-pack of their Hazy IPA and Fuji threw in another 4-pack.  I wasn't counting, but let's consider ourselves even....as I mentioned before, Fuji's generosity is second to none! 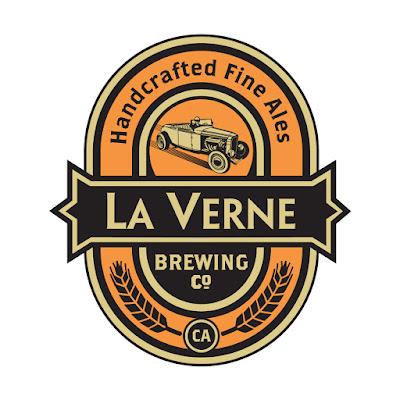 I had a lonely drive home as Fuji continued to shoot photos my way of some potential new spots to explore in the future.  Thanks again Fuji and Mike for a great day....I realized we don't have any photos of all of us together.  Hopefully we can repeat this soon somewhere and grab that photo.
Posted by SumoMenkoMan at 12:56 PM 13 comments:

A sumo wrestler gets a baseball card

Sumo wrestling and baseball have a long tradition of being the top sports in Japan.  The athletes often mingle with each other and sumo wrestlers sometimes get the honor of throwing out the first pitch at baseball games.  The first time this was captured on a baseball card was when Yokozuna Wajima got to do it during 1976 Pennant Race between the Yakult Swallows and Tokyo Giants (The Giants eventually lost to the Hankyu Braves in the championship game).  Wajima was one of the most dominant Yokozuna in the 1970s and his 14 top-tier championships puts him 7th all-time.  Here he is throwing a pitch to the Giants' player Isao Shibata on card #535 of the JC4: 1975/1976 Calbee set which consists of over 1400 cards! 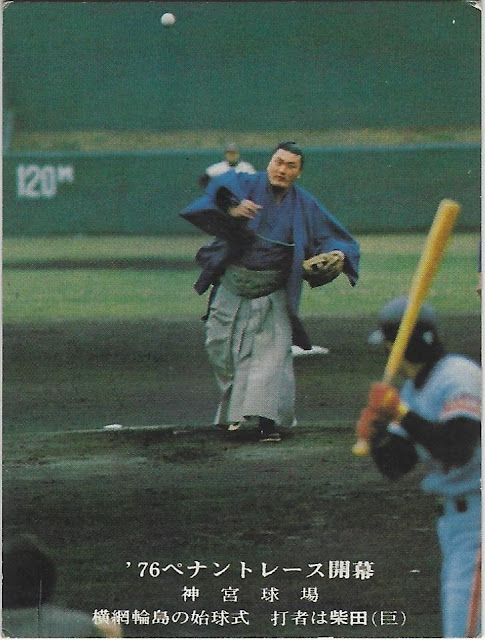 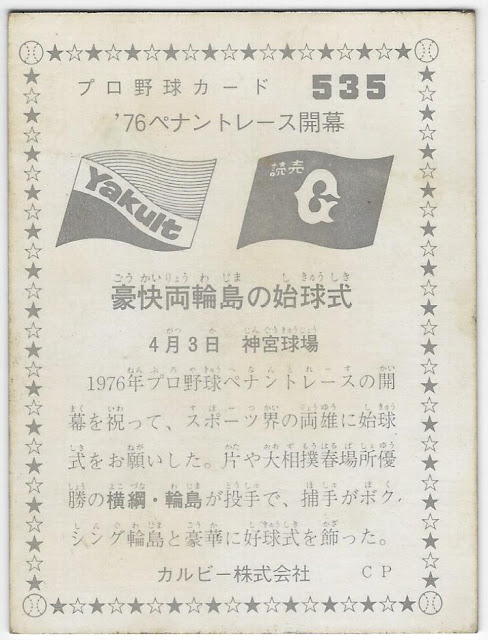 Posted by SumoMenkoMan at 8:00 AM 6 comments:

A lot of great things came out in the 1980s and movies were right there at the top.  Terminator, Predator, Back to the Future, Top Gun, Gremlins, Breakfast Club....the list is nearly endless.  The U.S. influence on movies and pop culture was borderless and the Japanese couldn't eat up enough of it.  If you wanted to find out what was happening in the U.S. film and tv industry, you had your subscription to the Roadshow magazine.  It was the bible for pop culture.  As a bonus, they would often print collector cards of the latest stars to insert in the magazine.  These are great opportunities to get some early cards of young actresses and actors.  I have about half a dozen or so of these and recently picked this one up....even before Phoebe Cates "reentered" the news as one of the idols of the Stranger Things kids.  Look at the lineup on these cards from 1987:

You'll likely see more of these Roadshow cards in the future on this blog as I walk down memory lane.  A fun little piece of card collecting history! 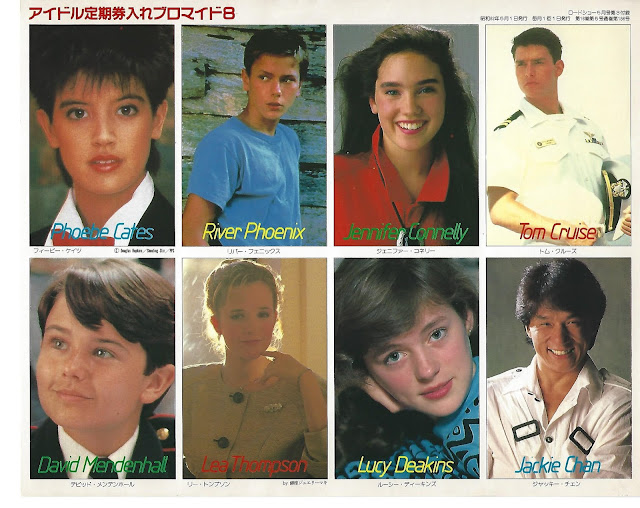 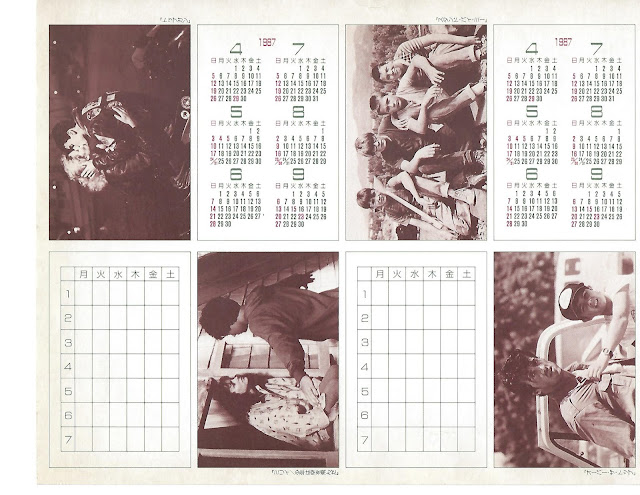 Posted by SumoMenkoMan at 2:00 AM 5 comments: