I recently picked up a ~2500-card lot of assorted BBM Japanese sumo wrestling from 1997-2003 and was taking a gamble on getting anything I needed and filling in some holes.  I almost forgot about the shipment as I had it shipped by boat over from Japan which takes about 6-7 weeks.  Not too bad, but the box was pretty beat up when it arrived.  Fortunately JAUCE did a great job of packing and everything arrived okay including the pounds of BBM cards.  Most significantly with this shipment, I was able to complete some base sets and pick up some of the insert cards from these early BBM sets as well.  In 2004, BBM stopped putting insert cards in packs and stuck with just base cards in the sets.  It was this way until 2013 when signature cards first appeared in the BBM sumo sets and the signature cards have been a staple ever since.  So these early insert cards are hard to find needless to say.  I normally don't chase insert cards and it was one of the reasons I got out of the hobby originally back in the mid 1990s, but I take an exception to the sumo BBM inserts as there are only a handful per set and I was really chasing more base sets and these happened to be in the auction as well.....bonus.  Normally, I wouldn't outright buy the cards at auction.  The nice thing about picking up all these cards is I was able to correct some of the checklists in the my book (Sumo Menko and Card Checklist) which will be reflected in the 4th edition that I plan on releasing sometime later this year or early next year.  The one downside is that I am left with a fair amount of doubles that I am going to have to unload somehow...hopefully eBay will be kind to me.  If anyone wants any give me a holler.....I'll give you a good deal on any that you want.  I should have enough material to do about 4-5 posts and will start with the 1997 BBM-Modern set this weekend once I get done sorting everything. 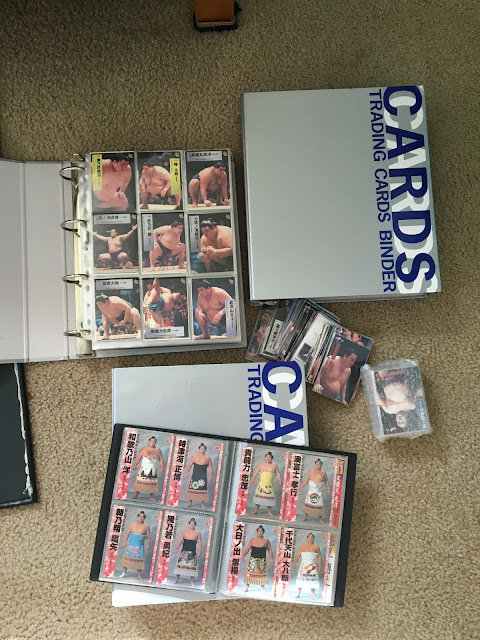 Posted by SumoMenkoMan at 4:08 PM 4 comments:

Post World War 2 Occupied Japan was marked by heavy poverty, inflation, and a very weak economy with a rampant black market.  To say it was a struggle for most Japanese is an understatement as most families had barely enough money to buy food and provide shelter let alone any frivolous items like toys and menko.  So when I have the opportunity to buy and own post-WW2 occupation menko I consider it a great honor to be able to preserve something that likely cost a child, and his/her family, food money.  A unique attribute to most post-WW2 occupation menko (prevalent throughout all menko subjects) is the "westernization" of menko where the wording is written in romaji or the romanization of the Japanese alphabet.  This was an attempt to provide a common language where the Japanese children and American troops could communicate with each other.  Since baseball was America's pastime there are dozens of sets produced in Japan during this time....and several sumo sets....not to mention the dozens of non-sport sets out there.  One of those sets is the 1946 Kimarite 6 Set (M461).  These menko were printed on very thin paper stock (paper was very difficult to come by so the thinner the cheaper to produce) with either blue or purple backs.  This set came in sheets and had to be hand cut with each individual menko measuring about 1.75" x 2.75".  On the front of the menko is a cartoon drawing of the rikishi as well as the rikishi's rank, shikona, and the romanized spelling of the shikona as seen in the pictures below.  The back had all the menko features (dice, gu-choki-pa, fighting number, hometown, height, weight, birthplace, stable (heya)).  So far I have identified 11 menko in the set with a few more likely.  Interestingly, in 1946 there was only one tournament as the whole sumo association was thrown in a whirl as the occupying forces took over various sumo facilities during this time.  On a positive note, by 1952 Japan was out of the post-war depression with a decent economy with sumo popularity reaching an all time high thanks, in part, to the advent of television and broadcasting.  So for now, we'll take these pieces of history and imagine how cherished they likely were due to the sacrifices made to own them. 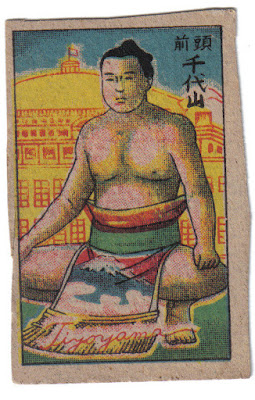 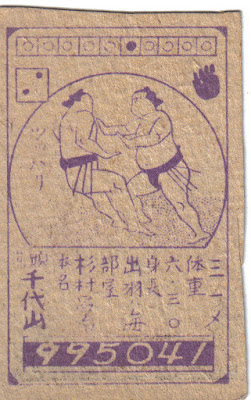 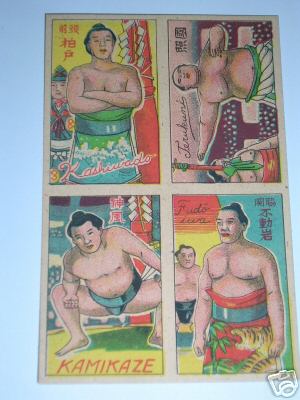 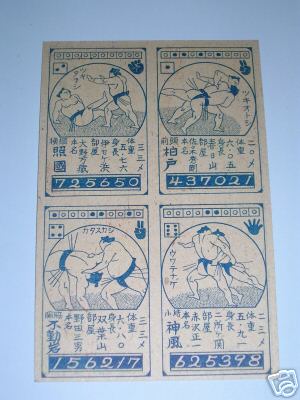 Posted by SumoMenkoMan at 6:31 PM 3 comments:

There has been a lot of talk and discussion of the variety of the 1974 menko cards produced in Japan.  This year is significant because it was the restart of the menko collecting craze in Japan which previously spanned from the 1930 to early 1960s.  For the American collector there are several of these sets with Western topics including Bruce Lee, Pro Wrestling Cards, Sumo Wrestling Cards as well as the handful of Japanese Baseball Card sets.  Today we'll highlight the H741: 1974 Nazo Nazo 3 set.  Like all the of the 1974 sets, this has 16 cards in it which is not a coincidence as the menko sets of this era were printed in sheets of 16 cards.  For sumo wrestler collectors, this set is important because it contains an early card of Takamiyama, the very first foreigner to win a main sumo tournament championship.  His Debut Card (rookie card) is in the 1973 Calbee Sumo Set, but his 1974 H741 menko card is several times more scarce and very difficult to find.  Each of these menko is printed on thick cardboard stock (approximately 3/32" thick) and measure 1 5/8" x 3.0".  The backs come in two colors of ink: green and brown.  Each card, I believe, can also have either color of ink on the back as well as plethora of Fighting Numbers so there are an large amount of cards in the Master Set.  As an added bonus in this set for the Pro Wrestling collectors is the appearance of the Haku who started his career as a sumo wrestler under the name Fukunoshima.  In early 1974 the Tonga government sent 4 young wrestlers to Japan to study sumo.  Fukunoshima did really well and likely would have made it into the top ranks.  However, his career was cut short when there were issues with the sumo stable he was in which led to an early retirement.  He later wrestled under several names including Haku.  The 4 Tongan wrestlers make their appearance in this set as well as the 1975 Osato Mini Card set.  Overall, all the three most famous rikishi of the day are printed in this set (Kitanoumi, Takanohana, and Takamiyama) are featured in this set as well as some more obscure rikishi that didn't rise very high (which is odd that they were featured in this set).  Completing the set has taken me years of scouring auctions so it will take a while to finish it if you are going to attempt it.  I have yet to see a complete uncut sheet of these....not sure if they exist. 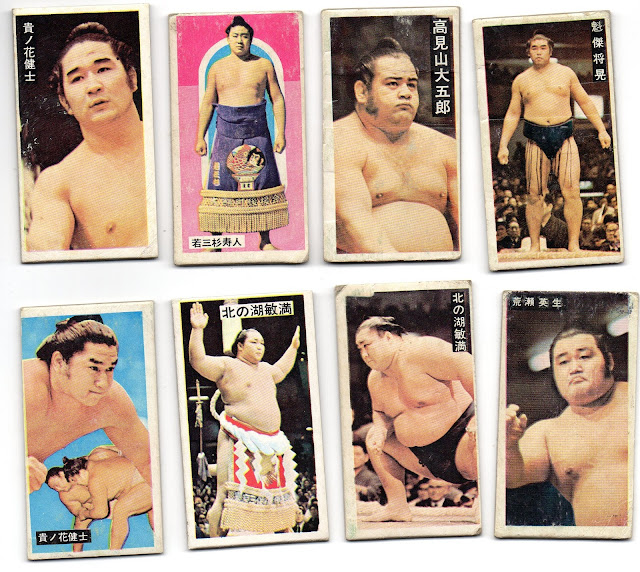 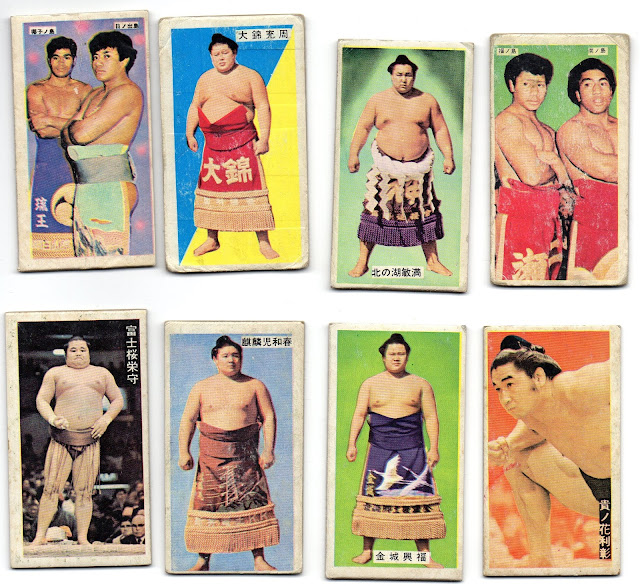 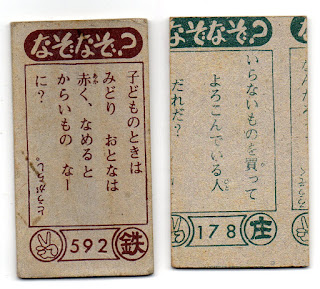 Here is the set checklist:

Two Lone Sole Mates in a month!  Hopefully I keep this up.  This set has eluded me forever.....and the evidence was right under my nose the whole time.  I've owned maybe 4-5 of the sumo card of Yokozuna Yoshibayama over the years, but could never find another sumo wrestling menko card in the set.....that's because he is the only sumo wrestling star in the set and the other cards are famous stars from baseball, tv, movies, and cartoons.  I have a big box of misc menko cards that I've accumulated over the years as I tend to "dump" the non-sumo cards in this box when I buy auction lots.  It's been slowly piling up and I've made a concerted effort recently to try and put some of the cards on eBay to thin the herd and give these menko new homes.  I found a baseball menko of Fumio Fujimura that I listed on eBay with no takers....fortunately.  When I studied the back design of the Fujimura menko I realized I had seen that back before and went to my binder of Lone Sole sumo menko.  Low and behold I discovered a match...I then proceeded to dig through the box of misc menko and discovered 4 more bringing the total that I have of this set to 6.
I've labeled this set the M548 - 1954 Famous Stars 10 set with the checklist as follows: 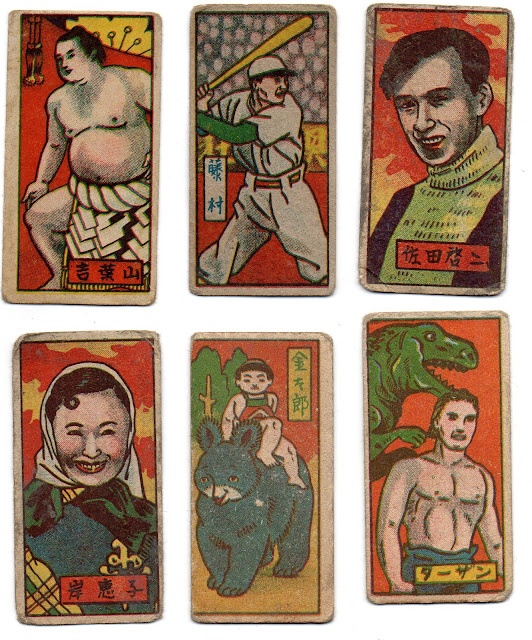 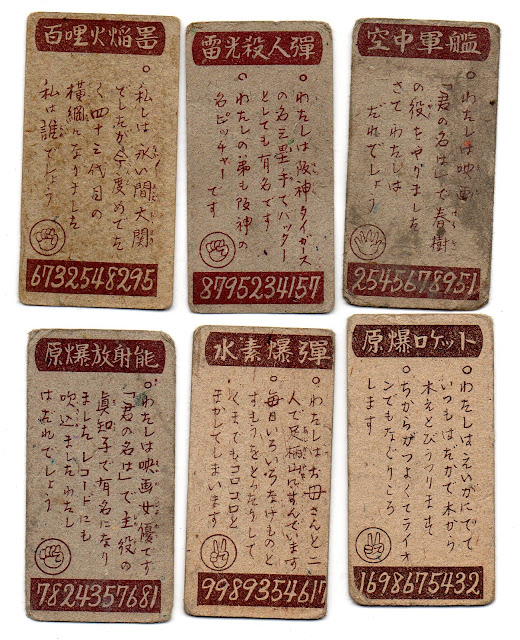 Good stuff....now I can go have a beer and enjoy the rest of my Labor Day weekend feeling like I've accomplished something laborious.  Enjoy and stay safe this weekend.....talk to you next week!
Posted by SumoMenkoMan at 10:32 AM 3 comments: