It's been a while since my last post since work has taken me to Florida and an impending move to Alabama at the end of summer. One thing in the works is the next edition of my book, Japanese Sumo Menko and Card Checklist.  The main addition this go around will be additional checklists and new sets I've accumulated since my last edition.  Discovering new sets is getting harder and harder, but on occasion new material does make an appearance. At this point, anything I end up finding is considered extremely rare as I would have likely picked it up by now.  In the back of my mind, I'm toying with the the idea of doing a coffee table book to print all known sumo menko and cards.  Hopefully I'll be able to get started on that at some point. 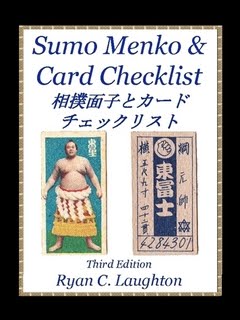 Anyone else ever written a book?  I compose mine in Microsoft Word and upload to Lulu to print on demand.  As one can imagine, there aren't that many sumo card collectors in the world....even fewer in America so I don't sell too many books. Given that I like to print in hardcover and color, the cost is prohibitive to some.

A few new BBM sets have been released so I'll post a review when I have a few moments. Looking forward to getting my next issue of SCM from Japan. Hopefully I'll be back up and running soon with more regular posts and content. I do have an awesome shipment waiting to get shipped from Japan. Some good stuff in there that will make for great posts. Even an new I catalogues set with Japanese baseball crossover.
Posted by SumoMenkoMan at 7:25 PM 4 comments: