Thanks to all that responded and replied in my last post on the 1960 Japanese Yukata Bolt and Sumo Card of Yokozuna Taiho.  Equally as popular in the 1960s were baseball stars Sadaharu Oh and Shigeo Nagashima and they both promoted yukata companies and adorned several cards attached to these beautifully indigo-dyed fabric bolts.  The bolts allowed the purchasers to make their own yukata patterns and sizes at home.....basically like buying fabric in bulk.  This particular bolt made by Tokyo Yukata features a beautiful jagged herring bone pattern in dark, light, and pale blues although the card of Nagashima shows him wearing a more cross-hatch pattern. 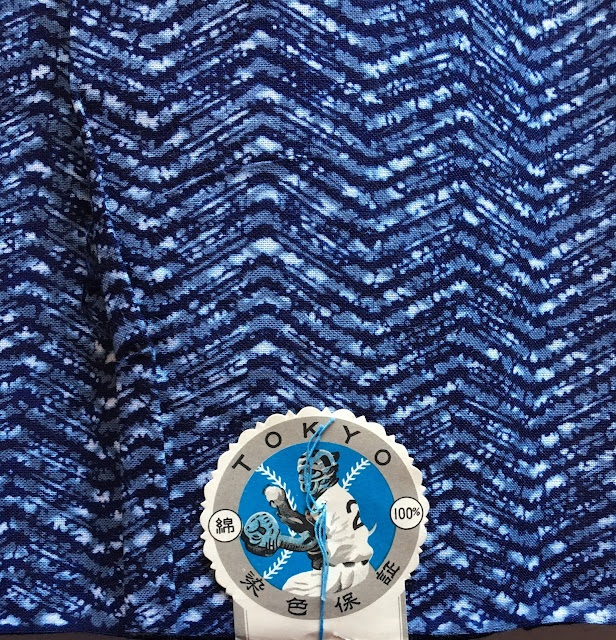 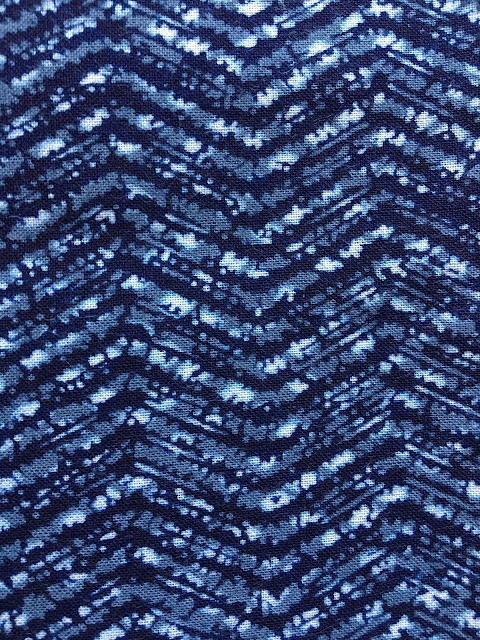 Stay safe everyone!
Posted by SumoMenkoMan at 1:47 PM 2 comments:

In the past year or so, I have been very enamored with these bolts of indigo yukata material with photo cards attached to them from the 1960s.  Athletes, actors, singers, kabuki stars....they all adorned brilliant blue/indigo yukata and promoted many different styles from many different companies.  Right now I have a close to 30 of these bolts in my collection and there is something soothing and mystic about the patterns.  This particular bolt and card are made by the Tokyo Yukata Company (東京ゆかた) and feature a card of the Dai-Yokozuna Taiho attached to a neat "shell" patterned bolt.  The card has the number "110" on it.  I also own #103 and #113 with different wrestlers so it appears that this was a run of sumo cards in a larger group of bolts.  Would be neat to know if Tokyo Yukata made hundreds of other bolts....I'm always on the lookout.

Please stay safe out there with this ever rapidly-changing health environment!  Sayonara!
Posted by SumoMenkoMan at 8:23 PM 10 comments:

I have been collecting Brandon Laird (now playing in Japan for the Chiba Lotte Marines) cards for a while now and became interested in Brandon's career for two reasons: 1) I worked with his mom in CA several years ago so would get to hear about his adventures in Japan, and 2) I collect some Japanese sports cards and it was a natural fit.  I've been trying to track down all his U.S. cards and parallels from 2008 to present.  I haven't dove too deeply into his Japanese cards since those tend to be a bit more expensive, but I do monitor auctions for cards from his U.S. playing days.  Recently, I was able to add the third #ed to 5 2008 Bowman Chrome Red Refractor meaning I now own a majority of the 5 that were printed.  Not sure I will be able to add the final two, but would be cool to have all 5 in possession at some point in my life.  Anyone else ever have a majority of refractor parallels of any players? 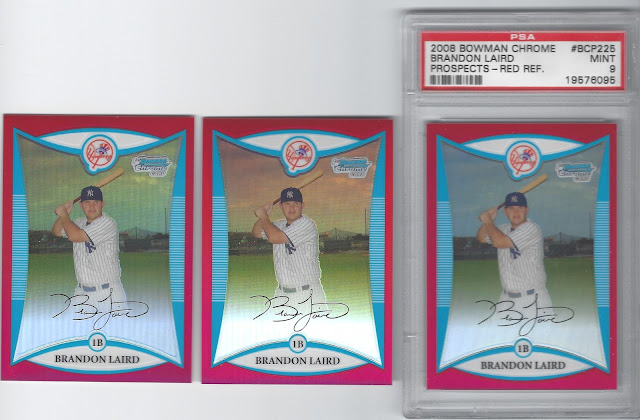 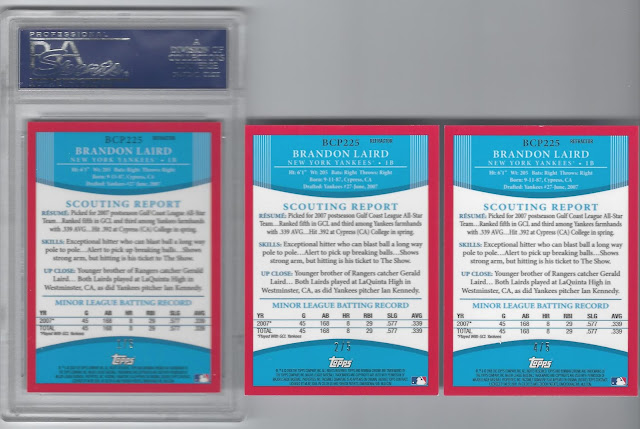 Fuji and I have a little dual-post action going on this Saturday where each of us is posting our Top-10 favorite unopened boxes we have in our collections.  Check out his here.  It was tough narrowing it down to ten, but I was able to break them down into different categories to help me decide.  From #10 to #1, here is what I came up with: 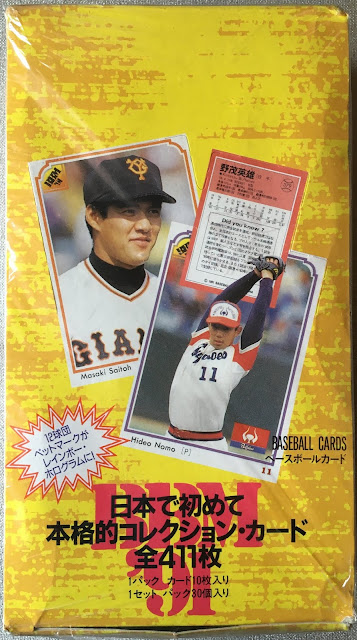 This was the first large-scale baseball set that BBM issued which also happened to contain a bunch of Hideo Nomo 2nd-Year cards and baseball legends Sadaharu Oh and Shigeo Nagashima as coaches.  My box is a bit beat up, but still a beauty and hard to believe it was 29 years ago!  30 packs per box with 10 cards per pack.  ﻿ 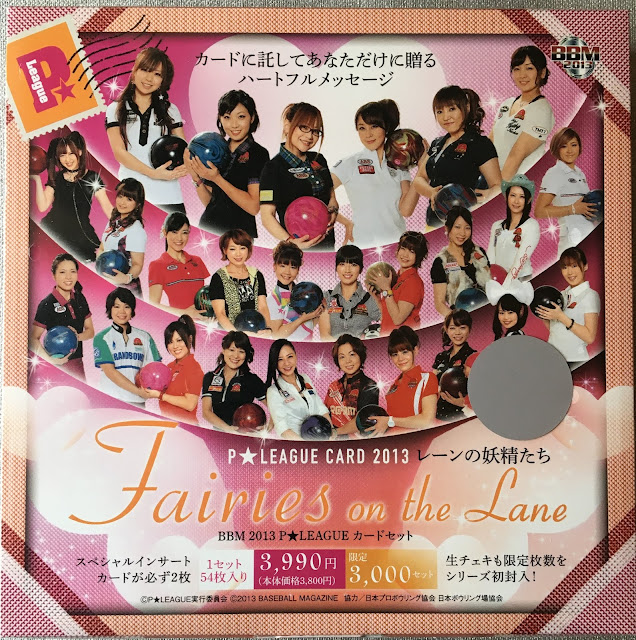 I used one of my 10 boxes as kind of a miscellaneous box, or Collector's Choice Box.  Pretty girls that are bowling seems pretty quirky, but if you go watch videos of them in action they are very talented.  The P. League has somewhat of a reality show feel, but fun to watch and the ladies do not disappoint.  The autographs of these ladies are extremely well done as well.  54-card set per box with 2 special insert cards to boot!
#8 (Also known as my favorite Vintage Japanese Non-Sport Box) - 1950s Weapons "Gold" Menko 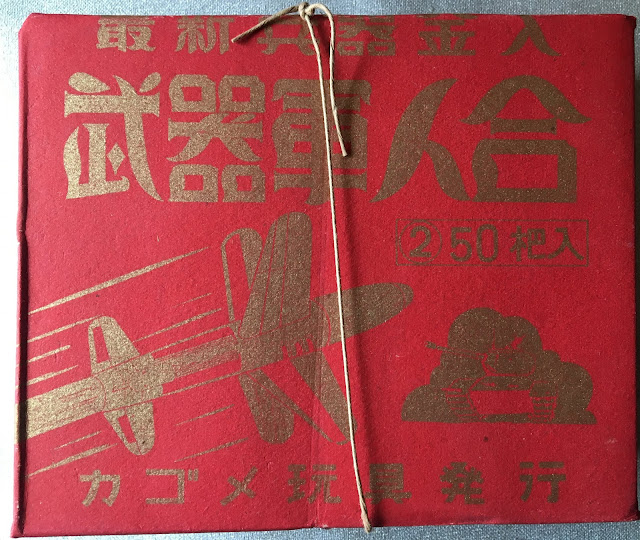 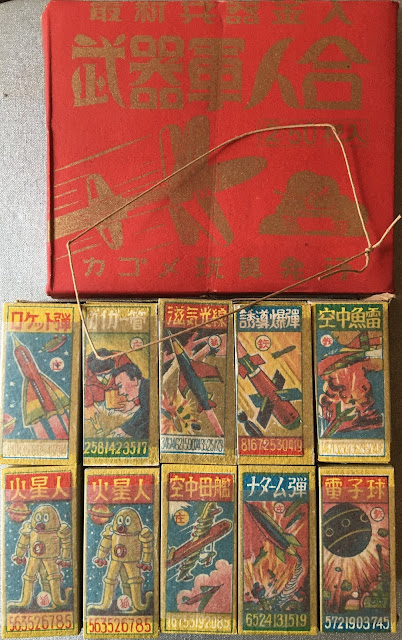 ﻿
In the mid-1950s, the world saw a proliferation of nuclear weapons as well as rockets, jets and bombers filling the skies.  This set captures the imagination of the artists through weapons and destruction  What makes this set very interesting beyond the artwork, is the liberal use of gold ink on the packaging and cards.  A great example of Japanese artistry.  These boxes are considered "unopened and sealed" when the twine is present with the box.  50 packs per box with 6-7 menko per pack.
﻿
#7 (Also known as my favorite Foreign "Non-Japanese/U.S." Box) - 2019 Panini European Kimmidoll 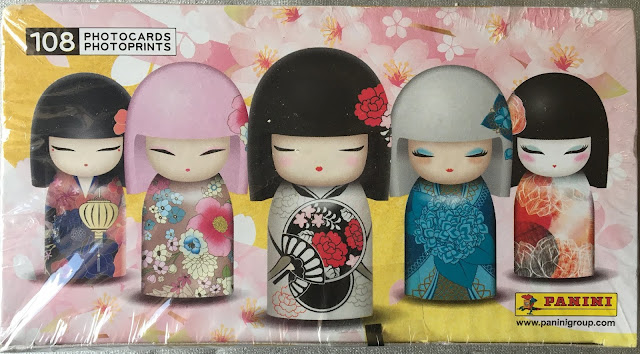 ﻿
﻿
I went through Spain and Portugal earlier last year right during the Kimmidoll craze.  Panini issued these cards only in this part of the world for a span of 3-6 months.  After I saw them, I ended up buying two unopened boxes online as well as an album.  Now you can't find them anywhere it seems.  These postcard-sized cards are strangely appealing to me and the artwork is amazing and refreshingly Japanese.  There are 18 packs per box with 6 cards per pack.
﻿
#6 (Also known as my favorite Modern Japanese Non-Sport Box) - 1986 Amada Famicon Mini Cards

﻿
I was and still am a huge NES fan.  The hours/days/weeks I spent engrossed in these games always brings a smile and air of nostalgia to me.  Amada kept the mini card craze strung along until the mid 1980s and issued these cards which captured screenshots of actual in-game play.  These boxes have 30 packs with 2-3 mini cards per pack.  I can still hear the Super Mario Brothers music playing in my head right now....
#5 (Also known as my favorite Oddball Box) - 1997 Takara Basscole Fishing Lures 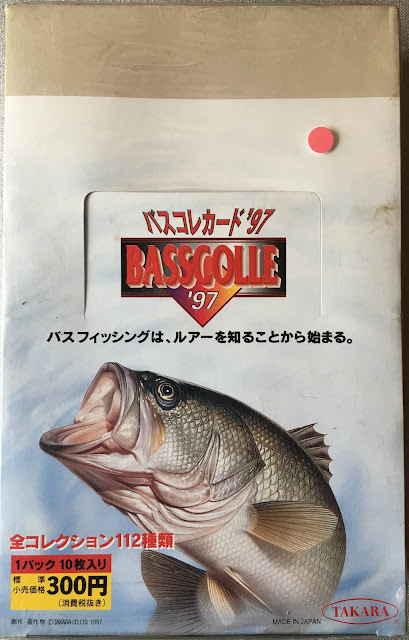 ﻿
Most of you are scratching your head on this one.  Me too.  Why do I have this box?  Read about it here in full detail.  But basically Brad Pitt's movie, A River Runs Through It" sparked a bass fishing frenzy in Japan which also happend to coincide with the boom in trading card production.  What are these cards?  Trading cards of bass fishing lures.  No, no the actually people bass fishing, just the lures.  A must in my collection for sure.  30 Packs per Box and 10 Cards per Pack.
#4 (Also known as my favorite Modern Japanese Sport Box) - 2016-2017 BBM Basketball 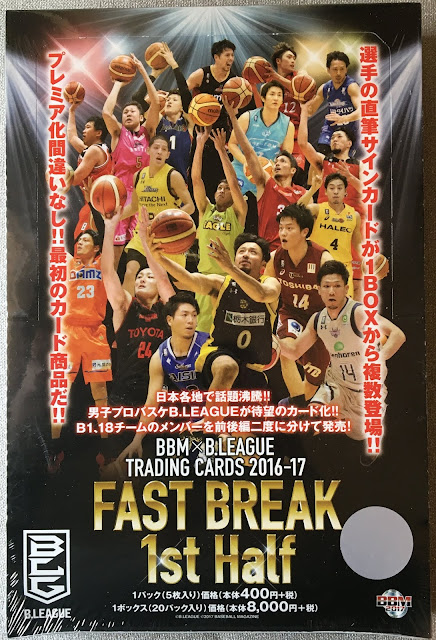 I have a PC of Yuta Tabuse...or at least a really good handful of them in my collection...and decided I wanted to collect these boxes.  At the time, the new B.League partnered with BBM to produce these trading cards.  That was back in the 2016-2017 timeframe and they have since been making these for 4 years.  This was the very first series issued back in late 2016.  20 Packs per Box and 5 Cards per Pack
# 3 (Also known as my favorite U.S. Non-Sport Box) - 2018 Topps Stranger Things Series 1 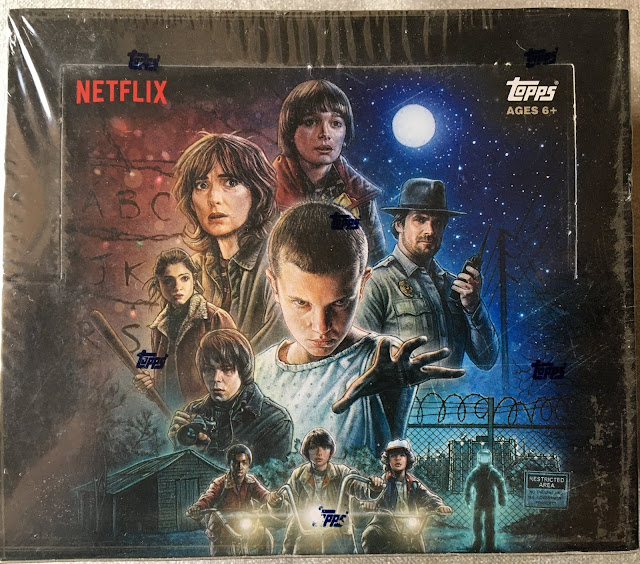 ﻿
I love the show Stranger Things and when Topps announced they were releasing a trading card set based on the series, I knew I had grab a few boxes.  I can't remember the exact story or controversy, but I believe the odds for special cards there was stated on the retail? packs wasn't accurate and this evolved into a lot of complaints and poor reviews of this first product.  Alas, this box stays on my shelf with unknown content....mysterious!  24 Packs per Box, 7 Cards per Pack
#2 (Also known as my favorite Modern Sumo Box) - 2016 BBM Sumo 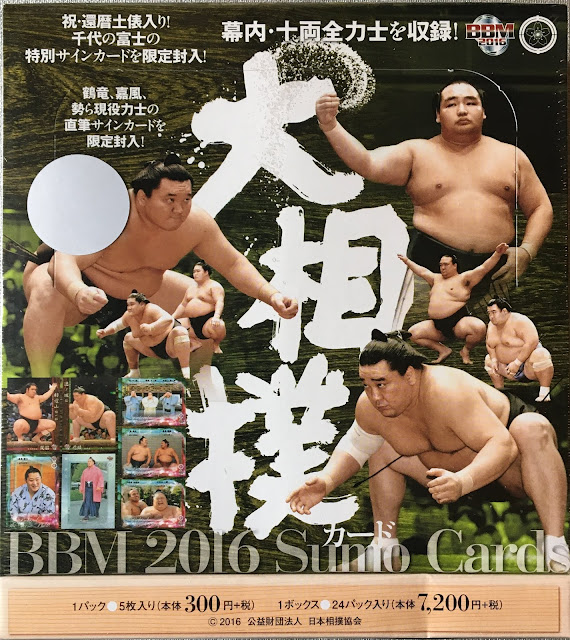 ﻿
I chose this year of BBM sumo cards because this was the year I connected with a great group of collectors on Facebook devoted to strictly BBM sumo cards.  It has been a great opportunity to share my passion with like-minded collectors and fans.  A sharp-looking set with great box art.  24 Packs per Box with 5 Cards per Pack.
#1 (Also known as my favorite Vintage Sumo Box) - 1958 Dash 7-8 Menko 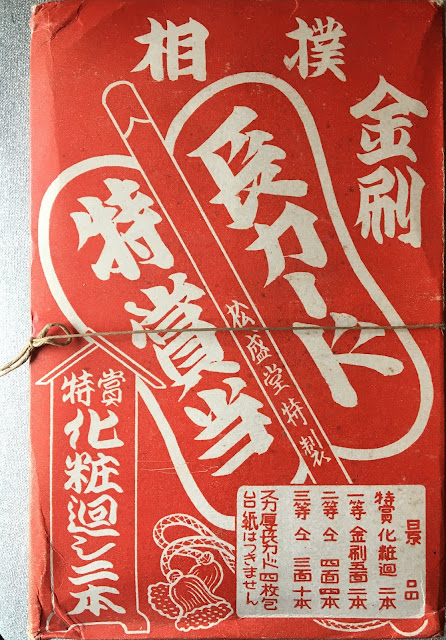 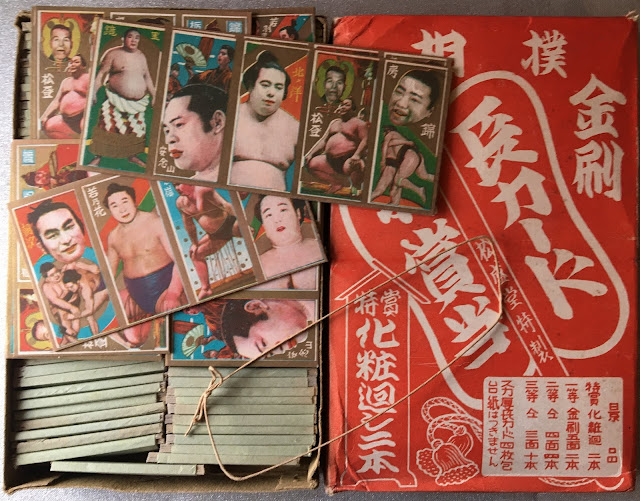 ﻿
This box is what got me into sumo card collecting in the first place. The very first sumo box I owned!  While vacationing in the southern islands of Japan, I found this box in a small antique shop in the resort town we were staying at.  I knew I had to have it!  This 1958 Dash 7-8 (Catalogue #M581) has resided in my collection as the first-ever sumo card box that I have owned and so it captures a special place in my heart and the #1 spot on my list of unopened card boxes.  I haven't counted the packs, but there are at least 100 packs with the special uncut gold prize card sheets on top.
Well, there you have it.  Thanks for stopping by and please make sure you check out Fuji's unopened box bebop as well.  Cheers and Sayonara!﻿
Posted by SumoMenkoMan at 1:00 PM 16 comments:

The world of amateur sumo wrestling lost a great representative this past weekend.  Ulambayaryn Byambajav, or Byamba as he was affectionately known as, passed away at the age of 35.  The SumoByamba.com website has more information about Byamba and his contributions to the sumo community.  He is most remembered as a TV and Movie star, but he was very talented inside the ring as well.  R.I.P. Byamba 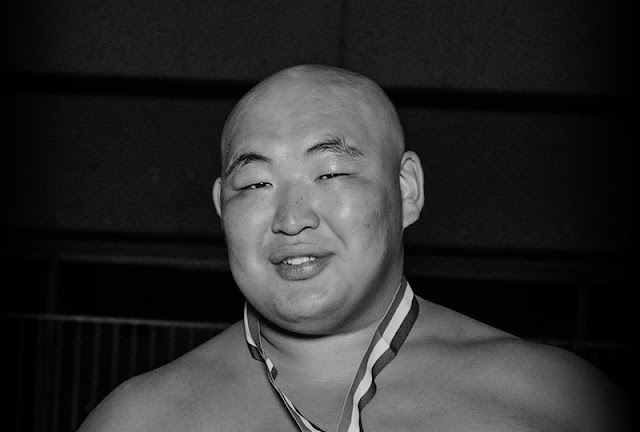 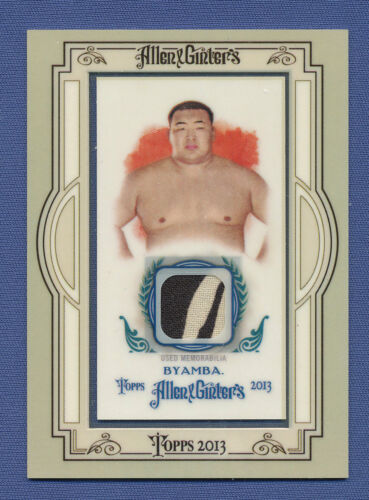 Posted by SumoMenkoMan at 8:31 PM 4 comments: