Back in March of this year I did a quick summary of the 2015 BBM Legends Set.  I was finally able to pick up a complete base set of these and wanted to show a few more below.  The 72-card set is broken up into 2 subsets.  The first subset (#1-#64) are pictures of the retired wrestlers, who are now stable masters, back in their active years.  All of these shots are pre-bout warm-up photos and are colored depending on how high of rank the wrestler achieved during his career.  For example, the Yokozuna (Grand Champions) have pink coloring on the front, the Ozeki (Champions) are purple, and so on.  The backs contain a recent "mug shot" of the wrestler in a suit and tie as well as all the statistics of the wrestler throughout his career as well as a little anecdotal write up on the bottom.  The second subset (#65-72), called Early Days, show very early photos of eight popular, but recently retired wrestlers.  These are done with a gold/brown hue on the front.  The backs of these also include another early photo of the wrestler along with career statistics and an anecdotal write up along the bottom.  I did not get any of the 58 autograph cards (an example is at the very bottom) that were also randomly included as part of this set.  I'll have to save chasing those for later. 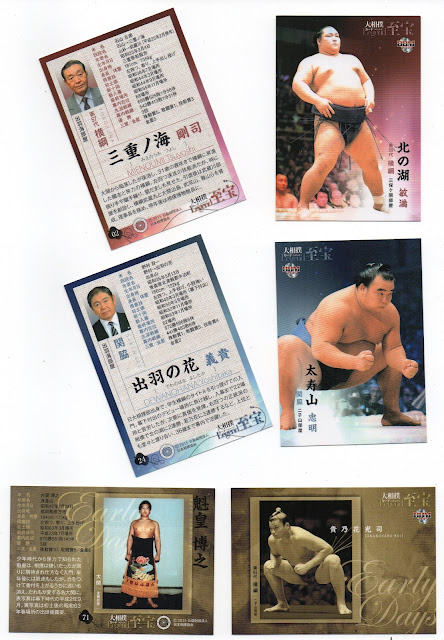 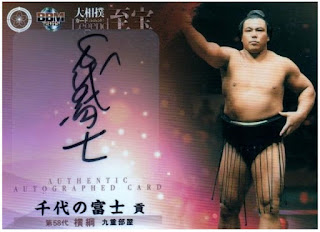 Posted by SumoMenkoMan at 12:18 PM No comments:

I'm a completionist when it comes to collecting sumo cards.  I want to get my hands on each and every sumo card made.  I really feel it is the challenge of being able to document and catalog a new set for the first time.  Nothing is more satisfying than reuniting individual cards back into sets which is probably how a good amount of set collectors feel.  This is how I collected back in the 80s and this is how I collect now.  With sumo cards, however, it does present some challenges.  First, my disposable income forces me to pick and choose as I can't have everything, so I have had to prioritize.  Second, the different kinds of sumo menko and cards is vast (believe it or not) and so this economic limitation forced me to get the more common stuff early on in my collecting year.  Now I am left with the "harder" and more expensive stuff.  Alas, if I had them all there would be no need to collect anymore, right?  So I am not complaining.  Lastly, out of all the types of sumo cards out there, the 1930s and 1940s BB-Series Bromide cards are a hot mess.  I say that with fondness for the challenge, but I knew once I seriously dipped my toes in the 1930s and 1940s BB-Series Bromide sumo cards, my sanity would be tested.  Well, now that I am in my second decade of collecting sumo cards, I have come to the realization that the BB-Series sumo cards need some catalog and checklist lovin' and given the respect they really do deserve.  Why the hesitation you ask?  Let me quickly sum up the challenges 1930s and 1940s BB-Series Bromide Cards.

- There are over a hundred different sets (probably, I'm just estimating here) = Lots of auction action = $$$ & ¥¥¥
- Only a small fraction (less than 5) have any company marks = Need to figure out which cards go to which sets

- Blank Backs (see above) = Need to figure out which cards go to which sets based on front design
- Out of a hundred different sets, how many ways can the front design change? = Answer, not a lot in most instances = In-depth study needed to sort them all = time, time, time
- Most were printed prior to WW2 = scarce = beat up = patience for them to come to auction

The 1930s and 1940s BB-series bromides were usually (not always, though) actual photographs.  A few used the halftone printing process.  The term "Bromide" or in Japanese "Buromaido or Puromaido" ”ブロマイド or プロマイド” comes from the term 'silver bromide.'  Silver bromide is a yellowish chemical and when mixed with a gelatin was a photographic emulsifier.  Once exposed to light, the silver bromide darkened into metallic silver.  The areas that weren't exposed to light do not change and stay silver bromide.  That is why these bromide cards have a yellowish tint to them in the light areas and silver metallic on the dark areas.  In fact if you hold these card to the light just right, you can see the shiny silver metal reflect the light.

Here are three cards from the BB391: 1939 Black Shikona Bromide Set (Notice the hand-colored tint on two of them).  These came from three different sources over the years. 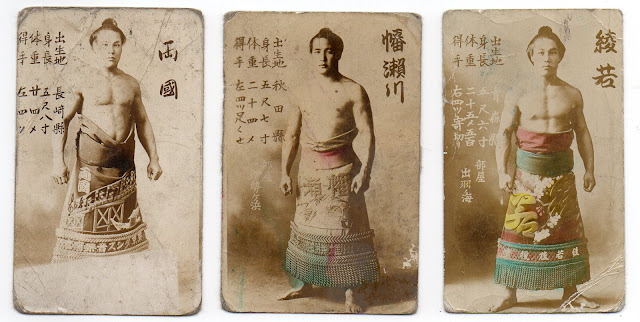 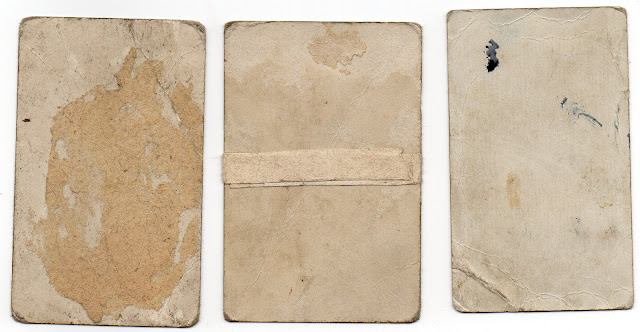 The unique things about Bromides, which is different from Menko, is that Bromides were meant to be collected and viewed, not used to play the game menko.  So a lot of times they were glued into scrapebooks or pasted into albums and consequently have a lot of back damage.  Here is one such book called a Puromaido Book プロマイドブック.  You can see the slits in the book to insert the Bromides. 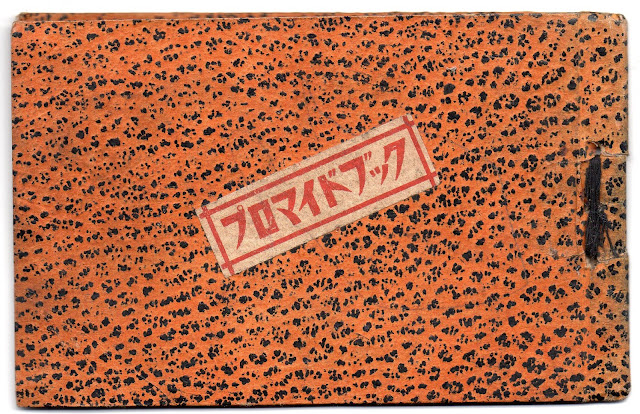 It will not be a quick process, but the 4th edition of my book will have a greatly expanded BB-Series section as I will have added many more sets, corrected numerous cataloguing errors, and refined the research in the area.
Posted by SumoMenkoMan at 8:19 PM 4 comments:

It is hard to complain about the 1997 BBM Modern set since it answered the call for a mainstream, well-distributed sumo wrestling set...surprisingly 6 years after BBM started releasing the baseball counterpart sets.  Up until 1997, there had been yearly releases of playing card sets that featured 52 of the most popular rikishi of the time, but only with a photo and name; hardly what one would call a true trading card set and one that was available only to the fans that visited one of the 6 main tournaments throughout the year.  In 1997, all that changed with the Modern set which was released during the end of that year.  This 203-card set was a great first attempt at establishing what has now been 20 years of mainstream BBM sumo sets.  This set does try to cram anyone and everyone who is part of the sumo association into this set and is broken up into 10 subsets as follows:


#1-#66 Active Wrestlers
The cards in this subset are stylistically ordinary on the front with a full bleed action photo for most of the wrestlers.  There is a vertical or horizontal box that has the name (Both Japanese and Romaji), rank (Yokozuna & Ozeki only), and stable information.  The BBM '97 symbol is in the upper, right corner for all these cards.  The back has a full body picture of the rikishi in their kesho mawashi as well as all the important biographical information you would expect on a trading card (height, weight, birthplace, career stats, etc) along with the card number in the upper, right corner.  One nice thing here is the presence of furigana, or the writing of hiragana above the Kanji (Chinese characters) so you know how to pronounce the name of the wrestler in true Japanese.  Sometimes the English on the front can be slightly off. 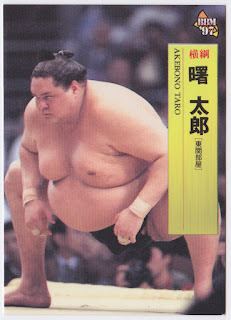 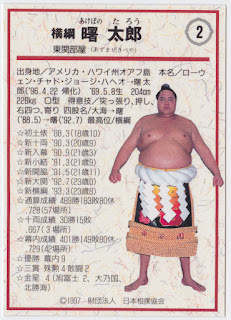 #67-#116 Toshiyori (Sumo Elders)
This subset features the elders of the sumo association, all of whom are retired wrestlers.  The front shows a full-bleed photo of the toshiyori in their active wrestling years along.  There is a box on the front that has both the toshiyori and wrestling names in Japanese and Romaji.  The back has a small insert that has a headshot photo of the toshiyori today as well as biographical information at that top.  The bottom has a "Did You Know?" section that has several interesting facts about the wrestler 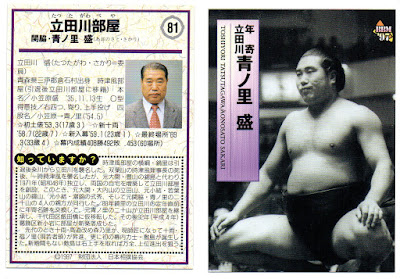 #117-#130 - Gyoji (Referees)
This subset has all the referees.  The front is a full-bleed photo of the gyoji during a match and has his name in both Japanese and Ramaji as well as which heya/stable he is affiliated with.  As with the toshiyori, the back has a insert phot with a headshot photo and all the biographical information.  Cards #117-#122 have a "Profile （よこがお）" at the bottom with interesting information about the referees in paragraph form.  Cards #123-130 have a "Data Clip (一口メモ)" with short bulletized facts about the what it takes to be a referee and the requirements.  There are 20 of these data clips that start with card #123 span to #130.  There is an uncorrected error (no reference that I know of mentions this error) with card #122.  It has written Data Clip when it is actually a Profile. 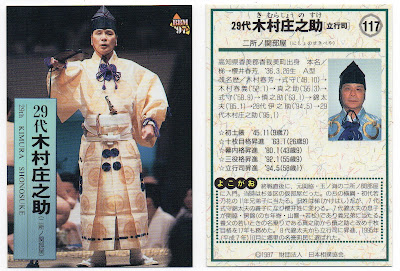 #131-#142 - Yobidashi (Announcer/"Handyman")
These are full-bleed photos of the Announcers during a match.  His name in both Japanese and Romaji is printed in a vertical box on the front as well as which heya/stable he is affiliated with.  The pack has the usual insert photograph with all the biographical information on the back of the card.  The bottom features a "Knowledge Dictionary" and highlights interesting facts about Yobidashi.  Cards #136-#141 actually have the top division bazuke rankings for the first three tournaments of 1997. 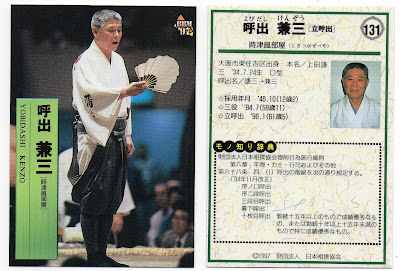 #143-#151 - 1997 Winners
This subset shows the tournament winners (Makunouchi and Juryo) for the first three tournaments of 1997.  It also has the the special prize winners in Makunouchi.  The back has highlights of the tournament as well as a action photo during the match.  The wrestlers winning record is printed below the name as well as which tournament he won. 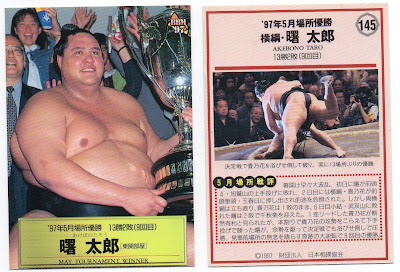 #152-#161 - Yokozuna in the Showa Era - Series 1
This 10-card subset features all the yokozuna who were active during the Showa Era (1926-1989).  This set is carried over into other years since there were more than 10 yokozuna during this time. 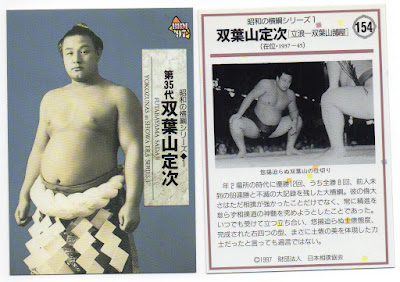 #162-#171 - #Top 10 All-Time Winning Wrestlers
As written this sub set features the top 10 wrestlers who have won the most matches in Makunouchi from Yokozuna Chiyonofuji (who just recently passed away) with 1045 wins to Sekiwake Kurama with 765 wins.  The front has a full-bleed phot and the back has the usual features with career highlights at the bottom called "This and That Record (記録あれこれ)" 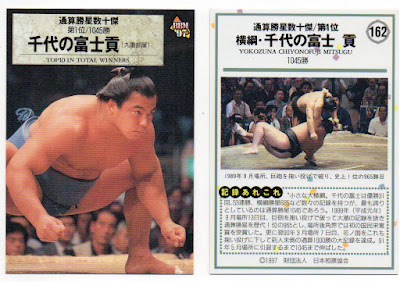 #172-#176 - Sumo Museum Collection
This 5-card subset show various historical artifacts found in the sumo museum with an explanation and the wrestler or gyoji it is associated with.  On the back is a historical photo as well with a picture of the object. 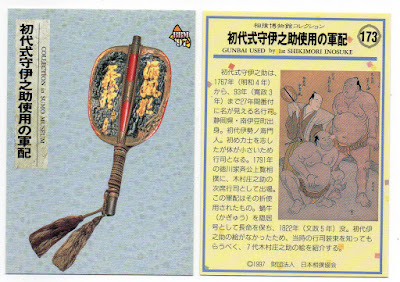 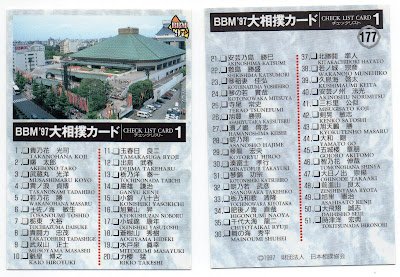 #S1-#S5 Insert Cards
The first insert set features the 5 top rikishi that were active when this set was printed.  The cards are pretty cool as they have a mawashi-type paper on the front with a gold foil star imprint on the bottom left.  The back shows a scene from the official announcement when a wrestler is notified when he gets promoted.  Promotion to Ozeki for Wakanohana in this case (#S-5). These cards are extremely hard to find and I think the seed rate was one of the 23 different insert cards per box or so. 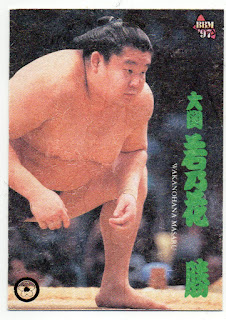 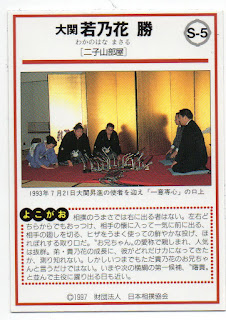 # P1-#P18 Insert Cards
There really are two sets here #P1-#P9 and #P10-#P18.  Each of these sets shows a 9-card action or photo sequence of the Yokozuna's ring entrance ceremony.  On the back is a "puzzle" which shows the tegate (hand print) of the wrestler once you complete the set.  The first subset is Yokozuna Takanohana and the second is of Yokozuna Akaebono.  As you can see from the example below, I do not have all the cards yet to complete the tegate for Takanohana. 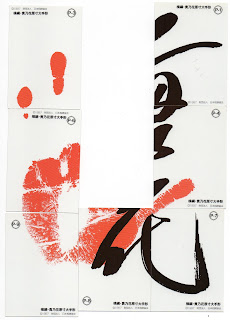 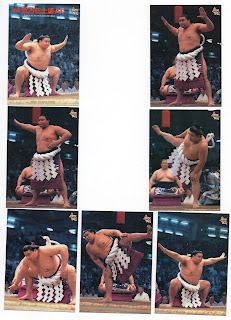 I hope you enjoyed this quick run down of this set.  More sets to follow.

Posted by SumoMenkoMan at 8:51 AM 2 comments: