Before Japan's Basketball B League was formed last year through the merger of the NBL and bj leagues, Yuta Tabuse was a star for the NBL's Tochigi Brex.  Surprisingly, BBM did not jump on board with getting the NBL license to print cards so NBL had their own cards printed.  Here is a somewhat difficult 2015-2016 card to find of Yuta Tabuse in his NBL uniform. 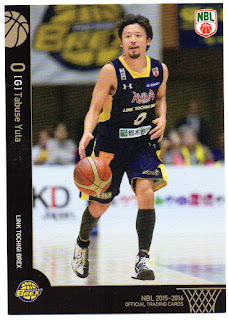 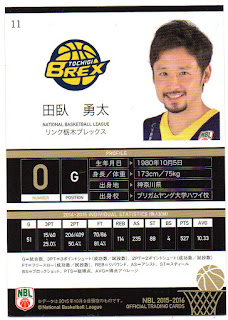 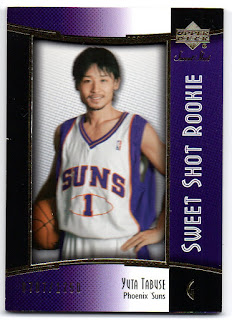 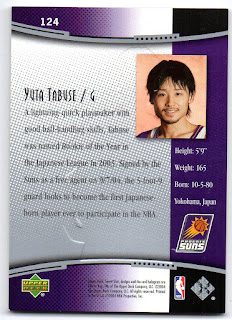 Preseason B League actions starts up here in another week with the Early Cup tournaments taking place.  The defending champions Tochigi Brex are playing in the Kanto tournament with five other 1st Division rivals, while the other twelve 1st Division teams are playing against each other and some of the 2nd Division Teams in 3 other tournaments around the country.  A pretty interesting mix...here is the schedule.

That is it for this evening.  Check out my 1997 Japanese Bandai K-1 MMA pack opening over at A Pack to Be Named Later.

During a trip to a local vintage toy and model train store here in Germany, I picked up this partial set of 1967 German Kampf Um Den Weltraum (The Struggle for the Universe).  This set was made by Heinerle out of Bamberg, Germany.  The set walks the collector through the development of rockets and the NASA space program up through 1967.  Pictures are mostly of rockets, engineers, and cool space related images (I'm a space geek and I picked up some other German space sets as well that I'll highlight here in the near future.)

Koberich lists the catalog number of this set as the 30825-25 made in 1967 with a total of 190 cards in the set.  This set also as an English-language parallel set that is identical on the front except that the writing on the back is in English....and you can definitely tell it was not translated by an American.  Koberich doesn't mention this fact of an English language version so I am going to get a hold of him and ask if he knows anything more about it.

What is really unique about this set, though, is that it contains a trading card of Neil Armstrong....card #185.  It shows him with David Scott in their Gemini 8 spacesuits together in front of a satellite dish.  Interesting fact is the image is reversed on the card front so this is also an uncorrected error...maybe they corrected it later, which would make it that much cooler.  I did an internet search and could only find his 1969 Topps Man on the Moon card as being the earliest trading card known up to this point.  Anyone know of an earlier card of Armstrong?

There are some other great cards of other astronauts including Alan Sheppard, Gus Grissom, Ed White, and Roger Chaffee...not to mention the famous Werhner Von Braun on Card #35.  I only picked up a partial set so the full set likely has other cards of other famous astronauts. 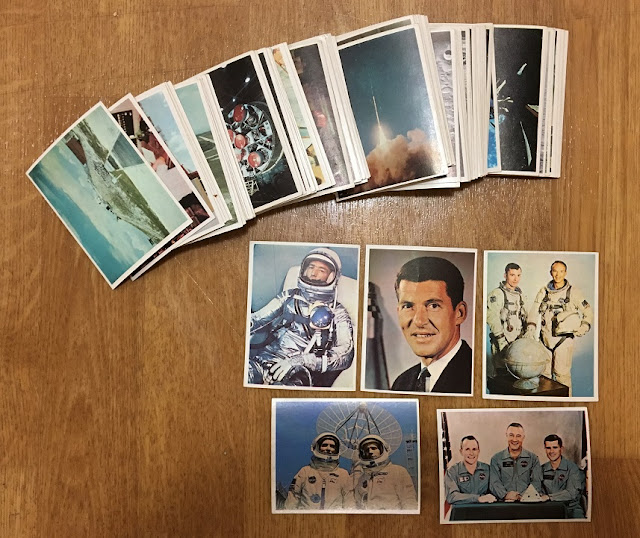 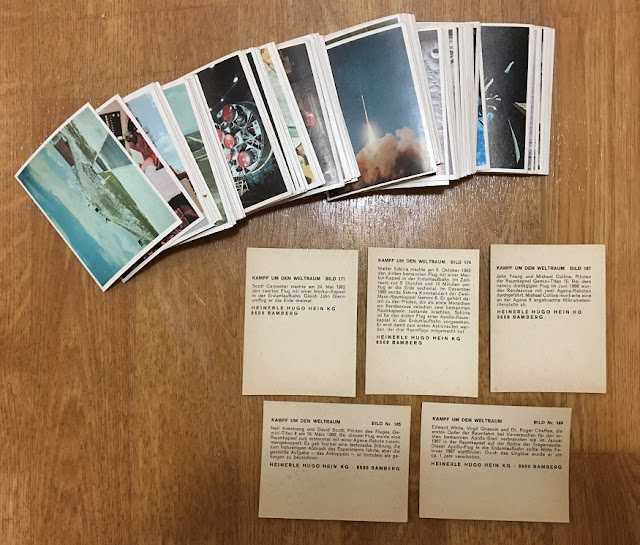 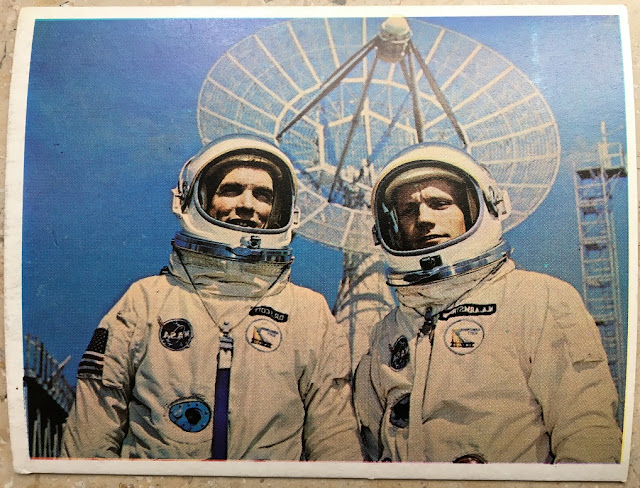 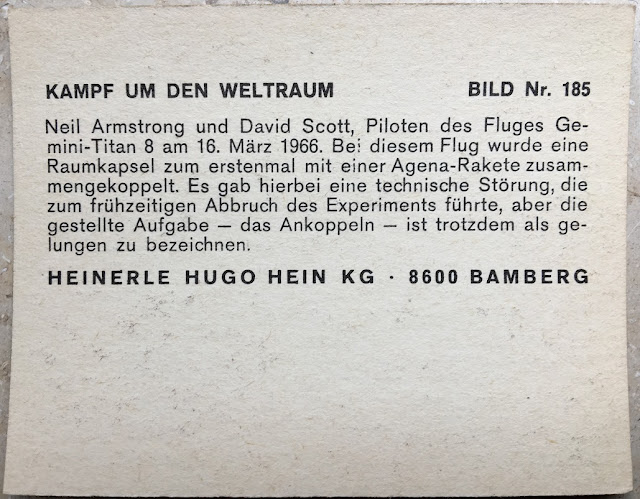 Posted by SumoMenkoMan at 1:29 AM 4 comments:

I don't often collect sumo wrestling post cards since they typically are so expensive, but I pick some up every now and then.  This is a recent eBay pickup and I knew I had to get them as I have not seen this style before.  They are prints from hand-drawn originals and the quality is superb.  They are printed with vivid colored ink and have gold-gilt for some of the accents.  I am assuming the original artist's name is on the bottom right corner, but I can't decipher what it is.  The back is pretty typical for postcards of this era....The company name is Daikokuya which was in Tokyo's Ryogoku district.  I really hope I can end up finding more of these, but seeing as this is the first time I have seen this style in several decades it might be a while before I pick any others up.  The two are Ozeki Nishinoumi who went on to become the 25th Yokozuna....the right card is Kunimiyama who retired as an Ozeki after being plagued with a bunch of injuries.

Does anyone else out there like to collect postcards as part of their card collection? 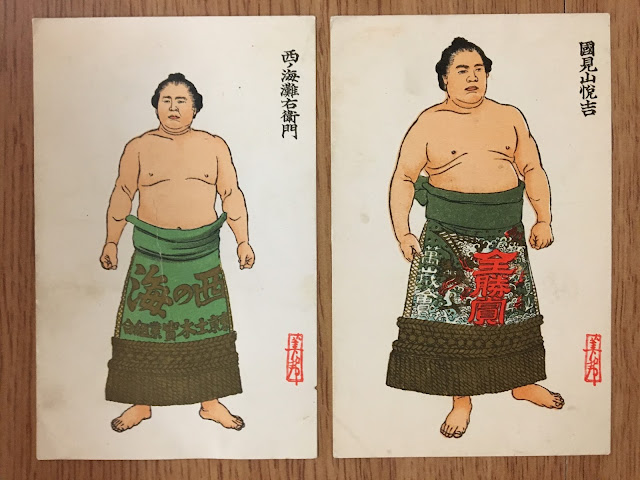 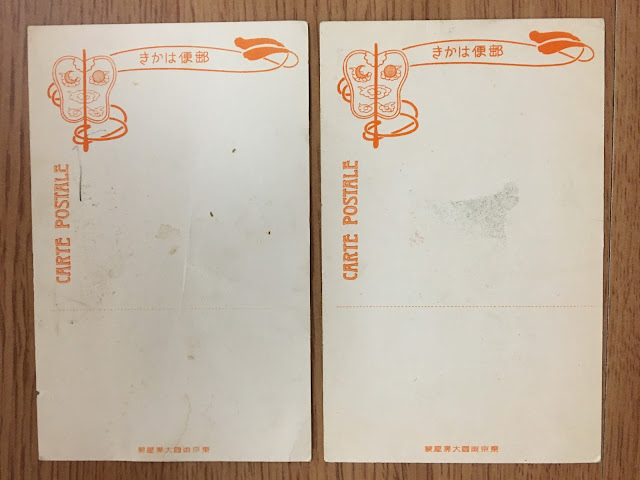 One of the most neglected parts of my sumo menko and card collection is the BB-Series, or Black and White Bromides.  The 1940s BB-series bromides are a "nightmare" to try and catalog due to the sheer number of different sets produced.  A lot of detective work has to go into binning them to the correct sets....and I don't always get it correct so every edition of my book I have to fix numerous sets and checklists as I get smarter on them.  I'm not complaining, but with limited time these BB-series badboys get relegated to the bottom of my priority list.  In fact, when I first started collecting sumo cards, I wouldn't even keep most of my BB-series bromides...that was a big regret.  I've reached the point in my collecting where I can now focus on these black and white beasts.  Now that we are settled in Germany, I've been experimenting with shipping from eBay purchases as well as shipping from Japan.  My first pickup was this nice 1950s lot from Ebay.  Believe it or not, a few cards from this lot are actually quite rare.....I was even able to catalog a new type of set which happens very rarely these days.  The BB572 Marusho set now has been confirmed to have a Type 3: Brown Back.  Pretty cool. These cards are well loved which makes me cherish them more.  I love the candid shot of Yokozuna Wakanohana taking on three young boys which is quite common in the sumo world.  Kids would test their strength against a sumo wrestler, usually during special events like retirement or promotion ceremonies. 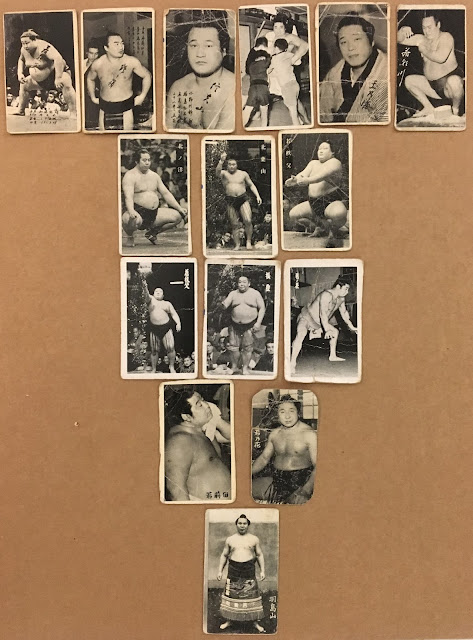 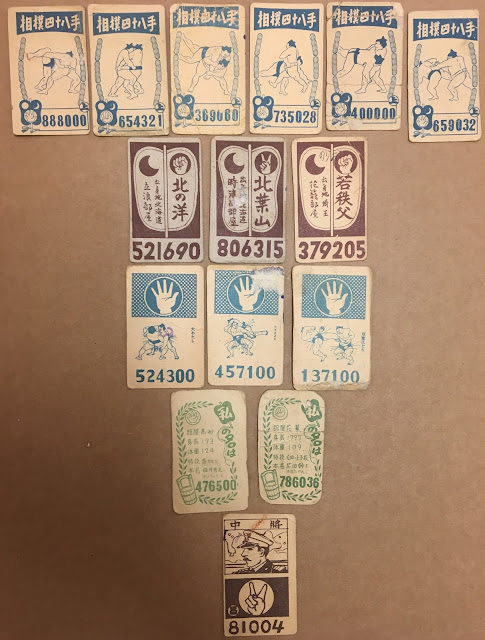 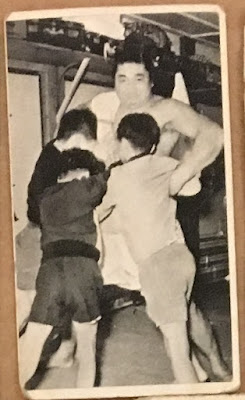 Thanks for reading and hopefully I'll have some more posts for you soon as the goods start flowing into Germany.
Posted by SumoMenkoMan at 11:32 AM 2 comments:

Sumo wrestling collecting material has all but dried up for the 1950s and 1960s, so I have turned my purchasing focus to the older stuff as well as the modern BBM cards.  There are still great sets to be had from the 1930s and postcards are always popping from the 1920s, but you very rarely see these 1800 CDVs (carte de vista) cards come up for auction.  This CDV is from the late 1800s and has a photograph of Ozeki Hoo (pronounced Hoe Oh).  Although no photographer is associated with this particular CDV (It looks like it says Fine Photographic 7), it could have been one of the more established companies in Tokyo as these likely would have been very expensive to manufacture.  I am hoping to gather more of these up in the future to hopefully be able to catalog them. 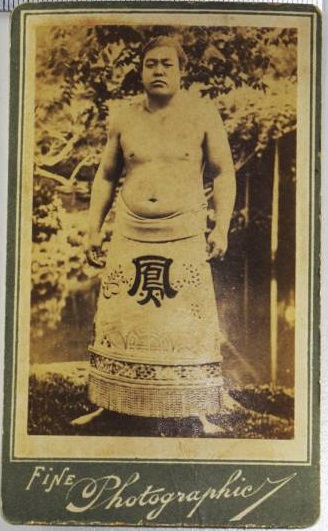 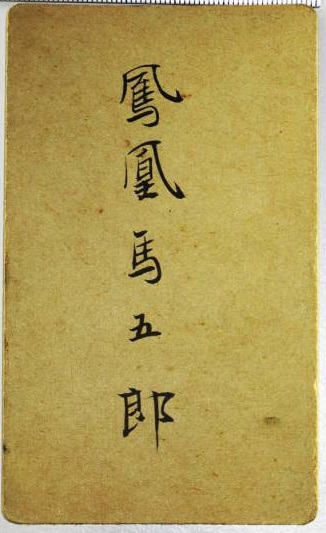 Posted by SumoMenkoMan at 2:07 PM 4 comments: