Stuttgart Germany, here we come.....off the grid for a few weeks.

I'll be taking a break from blogging for a few weeks as we pack up the house and head over to Stuttgart, Germany.  Once we get settled, I'll hopefully have some cool new German cards to share along with some new sumo cards on their way over from Japan.  Cheers everyone and I'll catch you on the other side of the Atlantic! 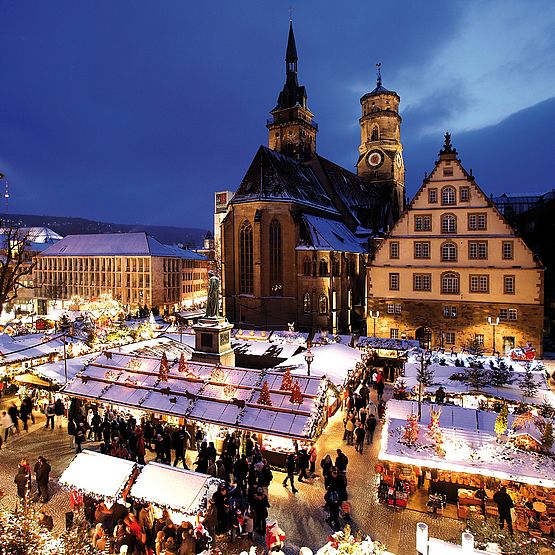 Posted by SumoMenkoMan at 3:00 AM 6 comments:

In Japan, sumo wrestling and baseball have been interlocked in a decades-long battle for popularity supremacy.  In the 1930s, sumo reigned king...after World War 2 it was baseball that carried the torch.  In the mid 1950s, sumo took hold until the 1960s where Oh and Nagashima took baseball to new heights.  In the 1970s, strong wresters like Kitanoumi, Takanohana, and Takamiyama popularized the sport overseas.  In the 1980s, Chiyonofuji was the man in sumo and seemed almost invincible...as well as sumo ratings.  In the 1990s, Nomo-fever brought about Japanese baseball to new fans overseas and was carried by Ichiro and Matsui.  BBM started making baseball sets first in the early 1990s followed 5 years later with sumo and is indicative of baseball's popularity strength.  The early 2000s were kind to sumo, but it's popularity died off until just a few years ago.  This battle will surely be an interesting one going forward.  Occasionally, there are cards that depict these two sports intertwined as is with the 2006 and 2008 Japanese BBM Baseball Ceremonial First Pitch Cards.  These four card feature sumo wrestlers throwing out the first pitch in April games during those season and thus were included in the 2nd series of the sets.  In 2006, Hakuho and Kyokushuzan had the honors...in 2008, Kotomitsuki graced card # 768 and newly minted Yokozuna Hakuho had a second go at this honor.  These are the only 4 cards I know that BBM has crossed over between these two sports.  I am hoping there will be more in the future. 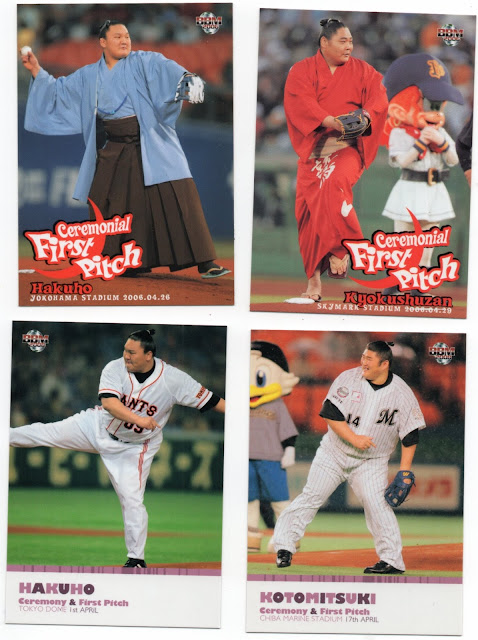 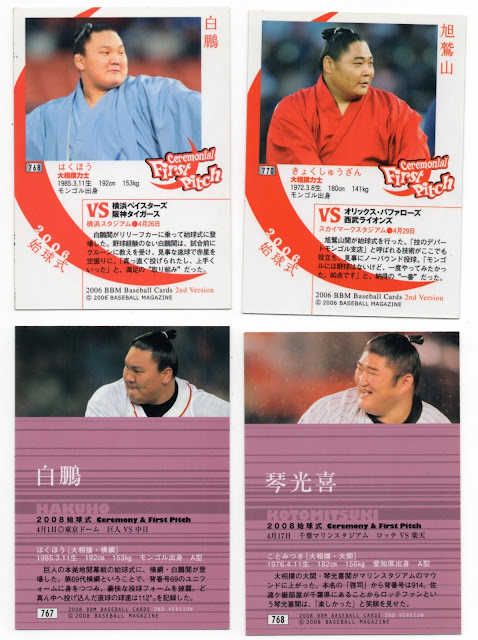 A few weeks ago, BBM released a boxed set of B.League basketball cards that included players from both the B1 and B2 levels of the league...the set is called High Five.  Because of the inclusion of the B2 teams we now get cards from teams such as the Fukushima Firebirds, Iwate Big Bulls, Cyberdyne Ibaraki Robots, and Earth Friends Tokyo Z.  There are 54 cards in the base set and 2 signature cards included in each boxed set.  The big chase is the autograph cards, though.  I was pretty impressed opening up the box and seeing the cards for the first time.  They are really cool with the silver foil highlights. 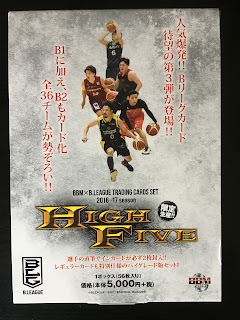 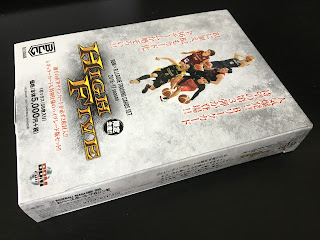 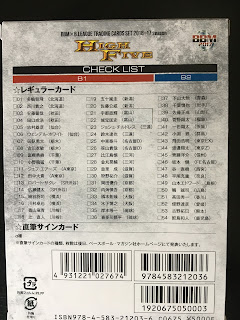 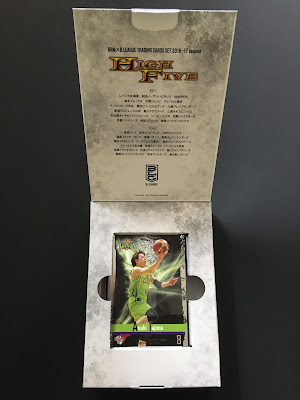 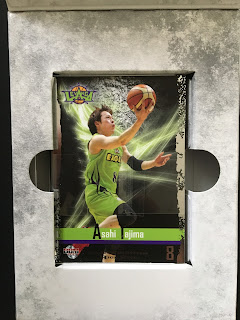 All 56 cards come in a cardboard box as seen above and wrapped in a sturdy cellophane band.  Somehow, though, my set moved around and card number #1 got dinged on the left corners.  The backs feature some basic facts and a full-body posed picture.  I really like the looks of these cards.  I got autos of Narito Namizato from the Shiga Lakestars and Shingo Utsumi from the Kyoto Hannaryz.....both numbered to /105  Some scans of the cards are below...but the silver foil does not show up in the scans unfortunately.  I bought a few sets and will keep them sealed except for this one.  The sets can still be purchased online so they must have made plenty of them to meet the expected demand. 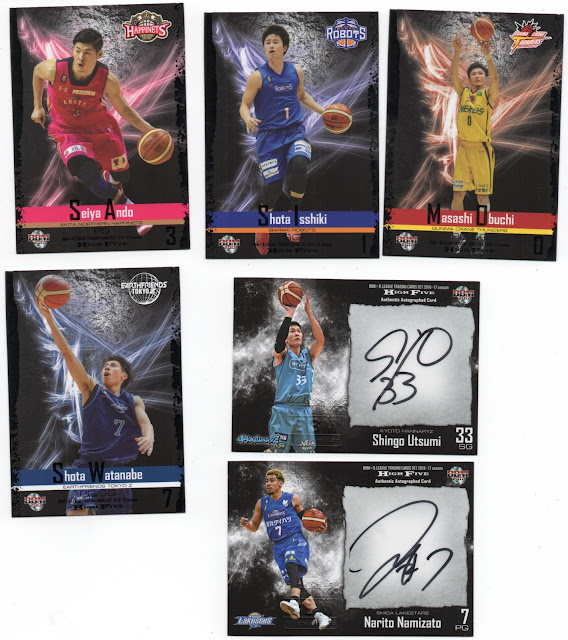 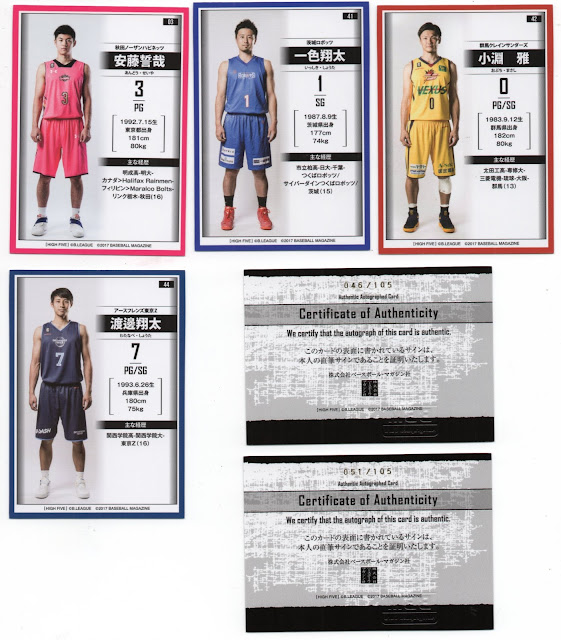 They are a little spendy and Niki at Rakuten still has them for sale at around US$41 without shipping.  I don't chase autographs so am happy with this base set...I am really hoping we see more B.League sets at the beginning of next season toward the end of this year.
Posted by SumoMenkoMan at 3:00 AM 2 comments: 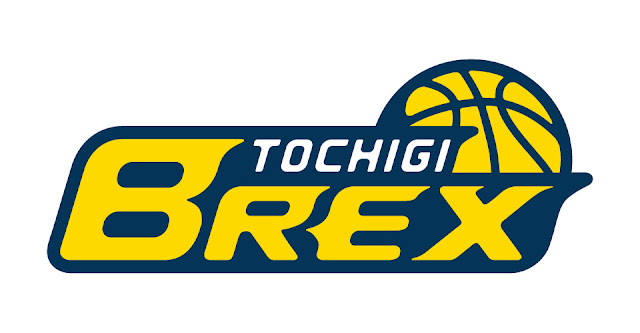 Congrats to the 2017 Japanese B. League Basketball Champions...the Tochigi Brex and my man Yuta Tabuse!!  Whoop. They beat the Toshiba Brave Thunder 85-79.  Here is the 12-minute highlight reel from the game.  They had a nice 4th-quarter comeback for sure.  Here are the 8 cards included in the 1st and 2nd half sets: 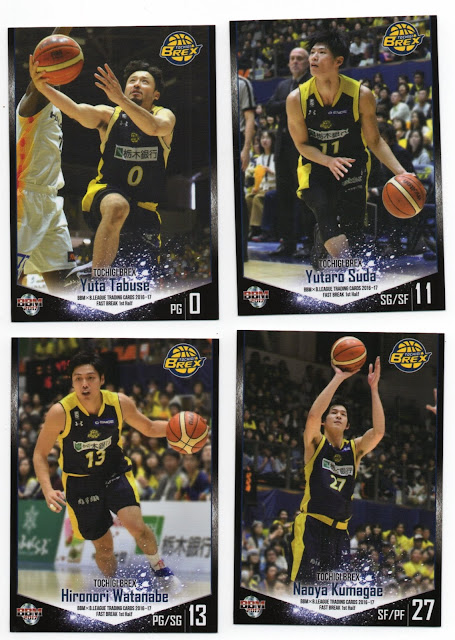 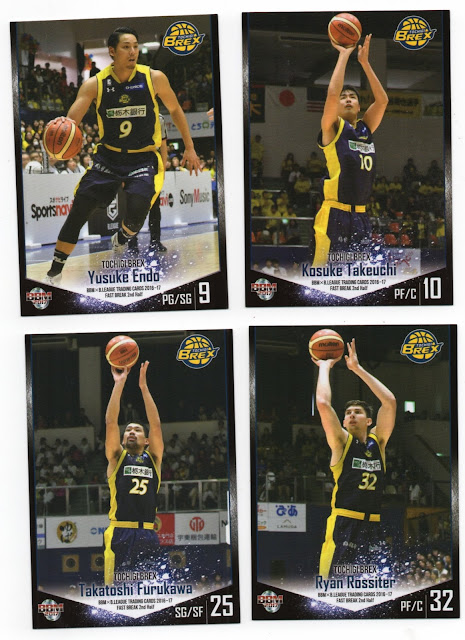 The awards show for the league was held Tuesday, 30 May where Nick Fazekas of the losing BRave Thunder (and former NBA player) was named B.League MVP as well as to the Best-5 team.  Here is Nick's first B.League card as well as the other 4 players on the Best-5 Team: Yuki Togashi, Daiki Tanaka, Makoto Hiejima and Kosuke Kanamaru. 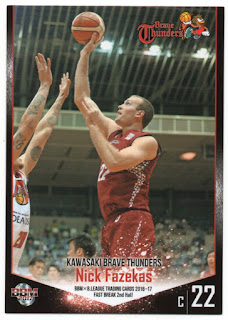 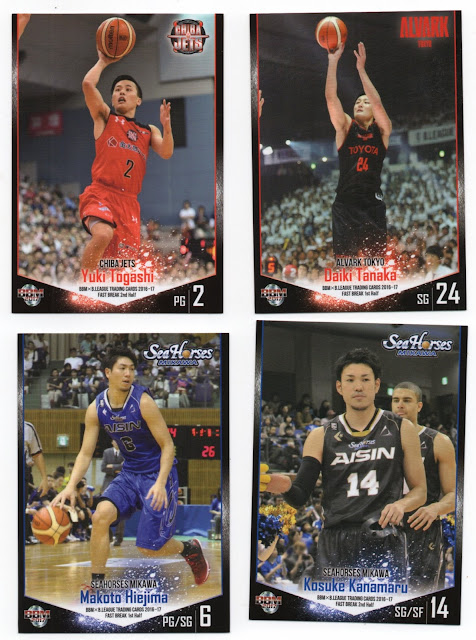 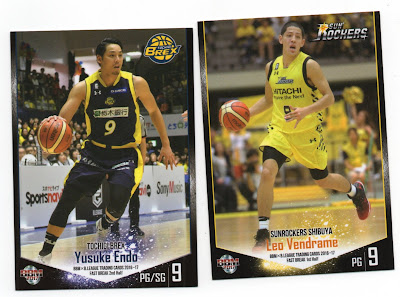 For those that can't wait for the regular season to start again, B.League is holding 4 regional pre-season tournaments simultaneously in September called the 2017 Early Cup  (actually the Tohoku tourney is one week after the others)....more details here on the Early Cup.

I have a special B.Leauge set called "High Five" that I will bust and post the results here. 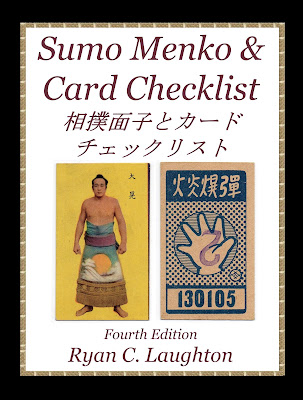 I finally found the time to get all the edits made and new sets inserted into my book in order to print a Fourth Edition.  Lots of new sets and checklists in this edition and dozens of new color photos.  All in all, there is about 40 new pages of content over the Third Edition.....353 pages total!!  I use Lulu to do all my self publishing and they have been really good as far as service and quality.  Here is the link.  For those that might be interested in purchasing a copy, here are a few details:

1. Price - US$77.14 plus whatever shipping you choose from Lulu. I don't receive a penny from Lulu so this price is what they charge. I'm not doing this for profit or glory, just trying to capture a piece of Japanese history for all to enjoy.
2. Coupons - Occasionally, Lulu runs specials like 10-20% off orders or free shipping. If I get any of those, I'll post them in the comments section for anyone to use.
3. Content - There are about 50 pages of front-matter content, 260 pages of menko and card checklists, and 34 pages of BBM checklists.
4. Format - This is a hardcover, full color book so the price reflects that. I'm visually trying to capture all the sets and checklists so I did not skimp on quality.
5. Future Editions - Likely, I'll be releasing the Fifth Edition in a few years as I already have about 12-15 new sets to include in there.

Thanks and please let me know if you have any questions.
Posted by SumoMenkoMan at 3:00 AM 6 comments:

That's right, we are looking at official licensed handball team cards from 2008.  This particular set has 22 cards in it...21 base cards and 1 special autograph card.  For ~$8, I couldn't pass this up to take a look and see what wonders lie within for the 2008 Osaki OSOL Sky Magic!! set.  The box advertises 2000 total sets produced. 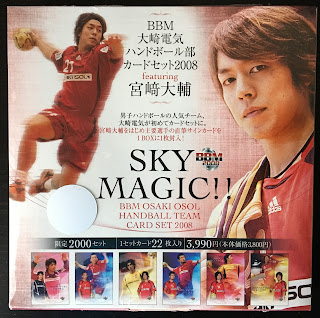 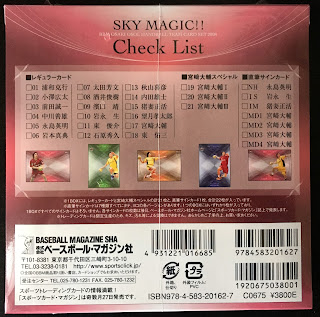 There is a Japan Handball League (日本ハンドボールリーグ) with 10 teams.  I'd love to watch a game in person, but YouTube has quite a few games.  I don't quite understand the rules, but looks like Basketball, Soccer, and Lacrosse mixed together.

Opening the box shows the game schedule on the inside of the top flap as well as a team photo.  The set number is stamped in gold in the upper right corner....I got set #1834 in this instance. 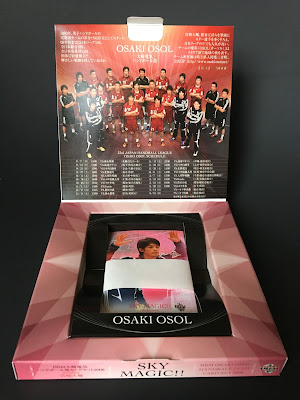 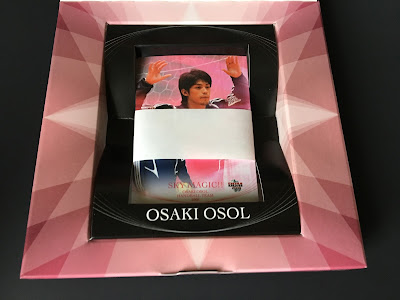 Cards come wrapped in a paper sleeve and are printed on BBMs standard high-gloss paper.  Each card is numbered and shows an action shot with a smaller posed shot in the bottom corners.  The imagery is pretty cool.  The backs have personal data as well as another action shop and statistics.  Each players is presented in order of their uniform number so the goal keeper, with uniform #1, is first in the set.  There are 18 cards in the base set and 3 "Shining Moment" card of Daisuke Miyazaki which are basically interview cards to get to know him better.  Daisuke appears to be the star of the team since he got his own 3-card Shining Moment subset as well as appears on the box cover.  He also is touted as the star on the inside front cover and he is standing in the front row of his team photo.  Surprisingly, I also got an on-card autograph of his as my special insert!  It is numbered 52 of 75.  They only made this set of handball cards and only of this team.  I bought two sets and am planning on keeping the other one sealed.  Pretty cool stuff! 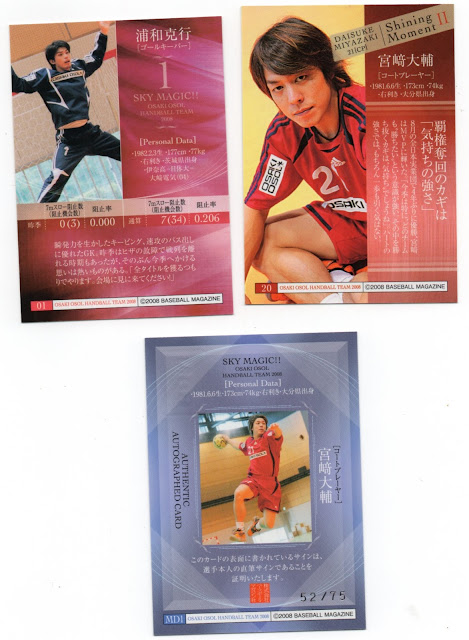