As a completionist sumo card collector, I don't envy the Japanese Baseball Card community.  The vast amounts of baseball cards, compared to sumo wrestling cards, would overwhelm me fairly quickly....as which happened to me in the early 1990s when the explosion of sets made it difficult for me to keep my focus.  So hats off to the Japanese Baseball Collectors and I really enjoy reading your blogs about the new and vast amounts of sets that are released every year.  For the sumo card collector we've been limited to 1-2 sets per year since 1997.....until 2015.  It wasn't until I got a hold of a SMC checklist that I was able to decipher the "craziness" of 2015 when three, yes three, sumo wrestling sets were released.

The first set is the standard "Regular" set that BBM has released the past 19 years which includes cards of all the top division wrestlers as well as smaller subsets .  However, 2015 was the first year the set shrunk to an all-time low of 90 cards in the base set, but it does contain 9 different Autograph Cards (all #ed to 60) of active wrestlers to make the master set complete at 99 cards.  The star power of the autographs is not very strong and only containing some of the lower sanyaku ranks.  Since this is the standard BBM sumo set, it was released right at the beginning of the year and contains a comprehensive checklist of all the top division wrestlers.

The second set is a set called "Essence" (粋) and features 81 cards in the base set and 9 different Autograph Cards (all #ed to 60) of active wrestlers making the master set 90 cards.  To be honest, I am really not sure what the big difference is between this and the Regular set above although one of the past Sports Card Magazines (SCM) likely explains the set release.  It was released later in the year (summer) and captures only the popular rikishi of the time and eliminates a lot of the lower ranked wrestlers from the checklist, but also tries and captures popular and up-and-coming rikishi.  There are 4 subsets including one dedicated to the gyoji (referees) and the subsets have more candid themes versus the more "serious" of the Regular set.  The star power of the autographs has greatly increased with this set and it captures all three Ozeki at the time (Kisenosato, Kotoshogiku, Goeido)

The third set is another Legend set called "Most Valuable Asset (MVA)" (至宝) and is similar to the 2013 Legend set called "Glory".   The Legend MVA set features 72 famous retired rikishi in action shots on the cards.  However, the main draw of this set is the massive autograph checklist of 58 different wrestlers (#ed from 30 to 90 of each card) including some great like Kitanoumi, Chiyonofuji and Taknohana.  The big downside, however, is that they are all sticker autographs....For such a significant set and limited autographs, it would have been nice to see on-card autos.

There you have it, all three sets laid out.  Looking forward to picking some of these sets up for cheap and I'll soon be checklisting them in English to include in my book.  The next edition of the SCM is coming out soon, so will be highlighting any sumo sets mentioned there.  Thanks!
Posted by SumoMenkoMan at 7:32 PM 4 comments:

From the mid 1970s all the way until 1997, the only cards produced of sumo wrestlers were playing cards, or trump cards as they are called in Japanese.  It wasn't until 1997 that BBM produced regular sumo cards and distributed them on a wide scale to collectors.  So for 20 years, collectors had to suffice with these annual releases which are still being printed today.  It's not surprising though as the end of the mini card, bromide, and menko boom of the 1970s had petered out by the time the great Yokozuna Chiyonofuji became popular in the early 1980s.  So for the extreme collectors we have to make due with the playing card sets to bridge this 20-year gap.

The playing card formats have stayed relatively the same since the first known set was produced in 1976.  Even the back design has stayed the same sans the late 1980s and early 1990s sets which featured a picture of the new Kokugikan on the back card face.  They eventually reverted back to the old design, though.  The early sets did not have the wrestlers name in English at the top, but soon included it and it has been standard ever since.  All sets feature 52 of the most popular wrestlers at the time the set was printed as well as a joker card of the gyoji (referee).

Right now there are confirmed sets for the following years (UPDATED 26 DEC 2017):

Surprisingly, these sets are actually extremely difficult to find and only ~6 or sets pop up every year.  Older sets often command $50 while some of the new sets can easily be had for $5-$10 on the secondary market.  These set new were sold at the tournaments for about 1500円 and can still be purchased today during tournaments!

This 2009 set is one that I recently cataloged and is unique in the fact that it is the first set that I know of to feature two gyoji on the same card.  It also has 4 of the modern day Yokozuna in it (Asashoryu, Harumafuji, Hakuho and Kakuryu). 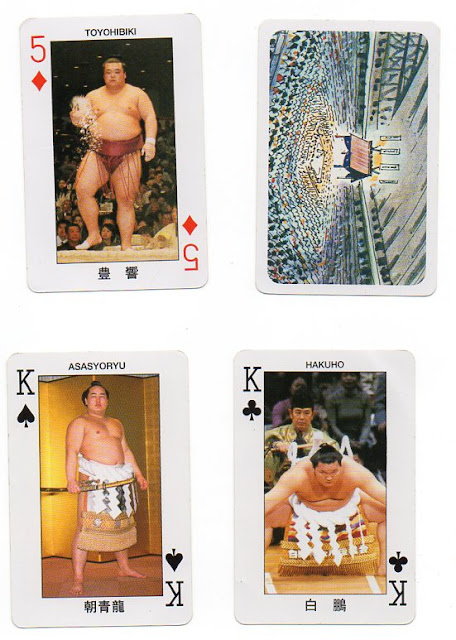 A Huge Thanks to Fuji.....Brandon Laird baseball card style!

Even though its been 15 years since I left Japan to return to the United States, I'm still constantly following sumo, browsing Japanese auction sites, and attempting to keep up on my language skills through daily news and tv.  When my coworker's son, Brandon Laird, signed with the Fighters last year, I knew it was time to start a Laird player collection which gives me something to talk about at work and allows me to branch out my Japanese card interest.  I recently started blogging and stumbled across The Chronicles of Fuji blog excellently written by Fuji!  Long story short, Fuji caught wind of my collecting interest and sent a care package full of Laird cards that singlehandedly jump started my Laird collection.  All I can say is "Wow! and Thank You!" to Fuji for his extreme generosity.  This really is what collecting is all about and bringing the trade aspect back into collecting has been extremely fun.  Thanks again Fuji! 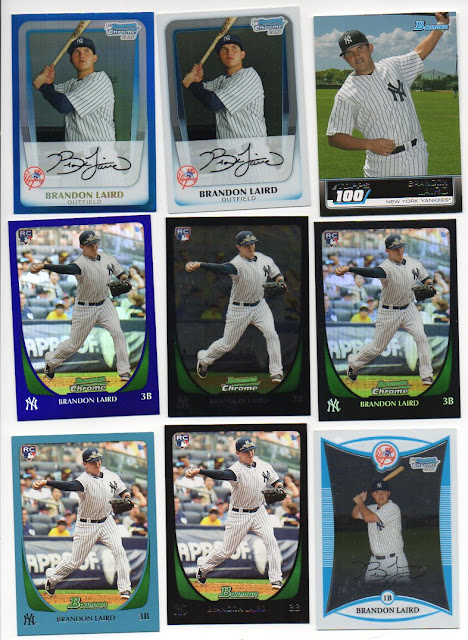 This is a set I've been working on now for a few months.  Around 60 airports from around the United States and Canada are participating in this promotion of handing out free cards to travelers. If you look at the airports (www.airporttradingcards.com) they are scattered across the countries and some pretty obscure airport making this set extremely difficult to complete.  So far I have 13 total (12 different since STL issued two different ones each year of the promotion).  If anyone lives near any one of these airports I'd be forever grateful if you could pick one up for me!  The following are the ones I have...including ATL. 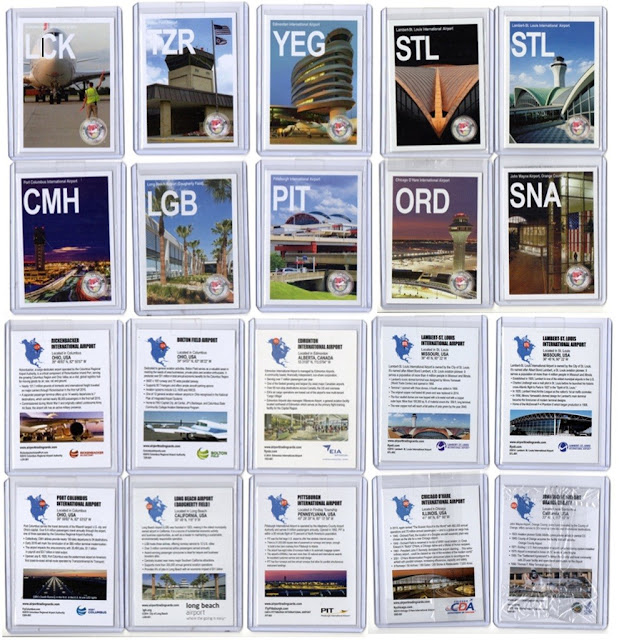 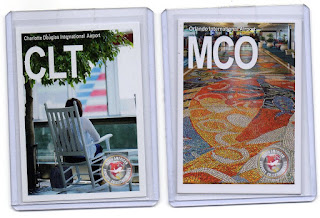 Posted by SumoMenkoMan at 3:27 PM 5 comments: