Yokozuna Kakuryu snagged his 4th top division championship in the March/Haru 2018 tournament in Osaka.  It has been over a year since he won his last championship and this tournament he was helped by the absence of the other two Yokozuna helping him sail to a relatively easy victory.  Kakuryu has been in sumo for over 16 years...over half of his life as he is at the tender age of 32.  Here is Kakuryu on his #3 2018 BBM Sumo card. 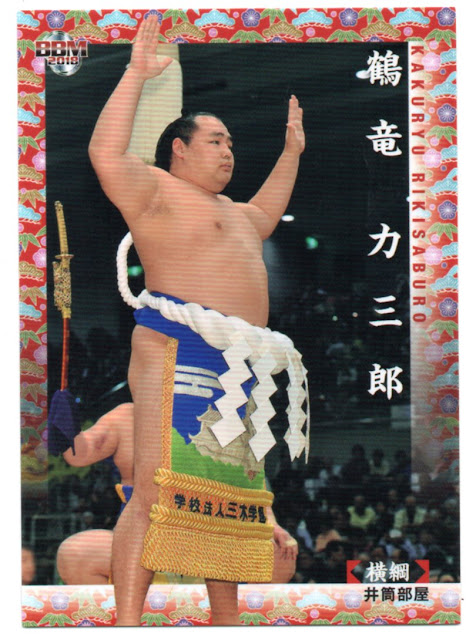 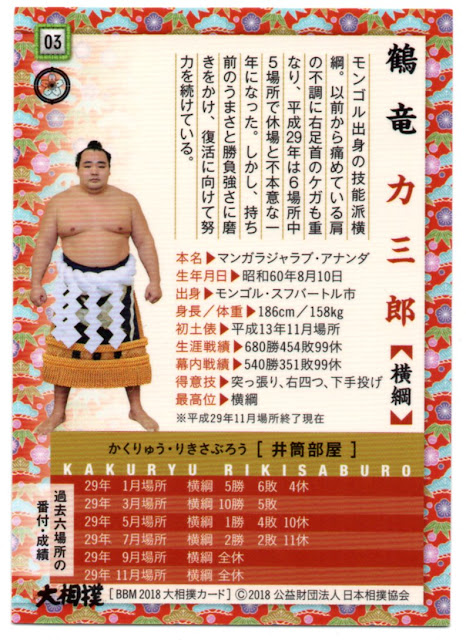 When Chuck Norris goes to sleep, he checks his closet for Bruce Lee.  Believe it or not, these two legends met on the screen in 1972 in the movie The Way of the Dragon eventually leading to (spoiler alert) Chuck Norris', aka Colt, death.  Probably the one and only time a Chuck Norris fact that doesn't play out in his favor.  During the insane Bruce Lee hype that swept through Japan in the early 1970s, Yamakatsu captured these two martial artists on a set of trading cards leading to rookie cards of the now famous Chuck Norris.  The Way of the Dragon set has 48 cards with some repeating images, but most of them capturing Chuck Norris and Bruce Lee in different stages of their final duel.  Adding additional cards to my personal collection of this 1974 Yamakatsu set is one of the goals that I set for myself this year.  It'll be difficult to complete this year, but I'd like to get a lot closer than where I am at.  In the meantime, these three rookie cards of Chuck Norris will have to be some of the highlights of my 1970s Japanese card collection.

Thanks Billy for inspiring this post with his awesome Bruce Lee NASCAR card. 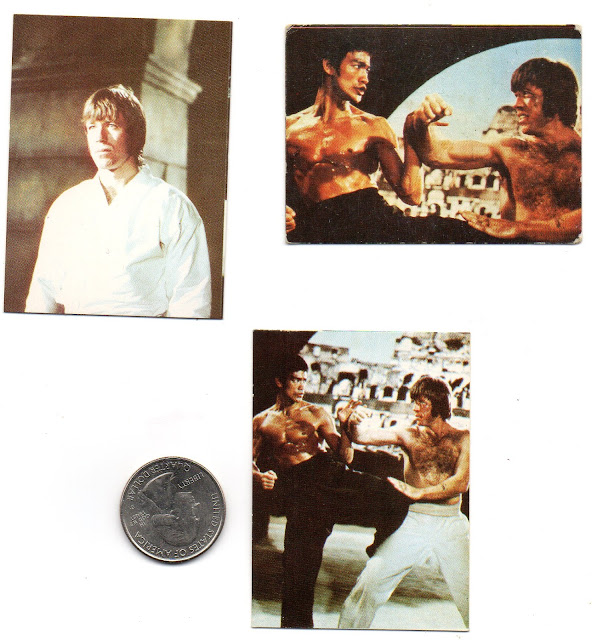 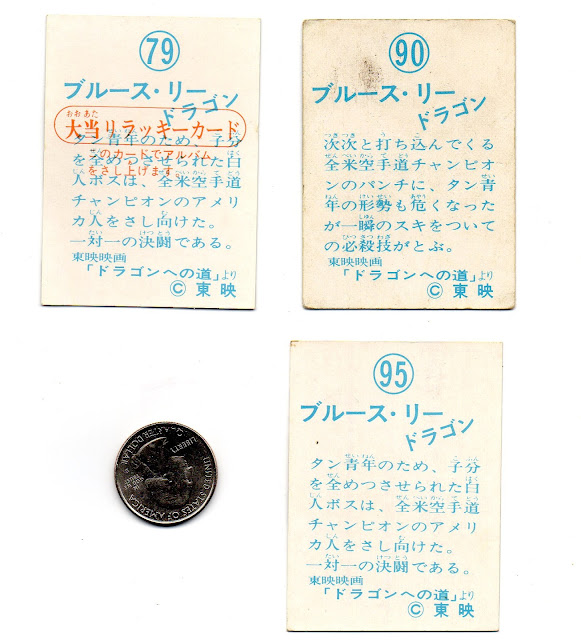 After Chuck Norris got done vacationing in The Virgin Islands, they were just known as The Islands.
Posted by SumoMenkoMan at 3:00 AM 3 comments:

Show me the Yen!! How much money do sumo wrestlers make? 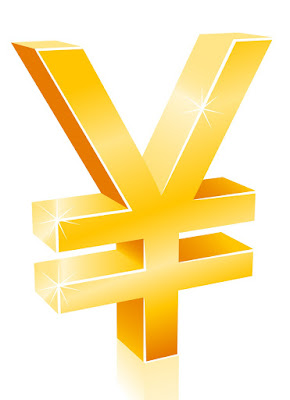 I get the question every so often of "How much money do sumo wrestlers make?"  Unfortunately, the real answer is "It Depends."  I know that is pretty unsatisfying, but sumo wrestler salary is confusing and complex.  The top division sumo wrestlers' salaries are made up of the following categories:

It could be someone's fulltime job trying to keep track of all this and I am sure there is a small army at the Japan Sumo Association doing just that.  However, the majority of a sumo wrestler's salary is typically made up of the monthly salary and this information is published in various forums each year.  I did a quick and dirty Excel Spreadsheet to show the increase in a sumo wrestler's monthly base salary from the early 1970s until last year.  There are some interesting trends:

1. Yokozuna Hakuho with his 40 tournament wins and longevity in the sport yields him close to a $25,000/month base salary.  His true salary is probably 2-4 times that amount.

2. The huge sumo boom that started in the early 1990s and lasted until the late 1990s is reflected in the above pay chart.  Wakanohana, Takanohana, and Akebono all contributed to this huge increase in popularity.

3. The stagnation of the salaries is evident in the 21st century.  Popularity stalled due to the rise of the Mongolians and the subsequent lose of Japanese interest.  Profits dropped and the Sumo Association could not afford to really increase wrestler salary.

4. It is hard to see, but the gap between Juryo and Yokozuna base salaries is closing.

5. The biggest base salary jump is from Sekiwake/Komusubi to Ozeki.  It makes sense since this is the true delineation point between a good and great wrestler.
Posted by SumoMenkoMan at 3:00 AM 6 comments:

If you don't read Cardboard History by Billy Kingsley, you are missing out.  I pull up his blog at least once a day seeing if he has posted anything new as I like his style of writing, his passion, his amazing collection, and his great attitude.  I sent Billy a small care package a few months ago with some early 1990 hockey boxes since I knew it would fit perfectly in his collection.  He surprised me this week with an amazing card.  This card has NASCAR, Bruce Lee, and Japan written all over it and those that follow my blog know that it is a perfect fit!  Thanks Billy!


Here is the history of the card courtesy of Billy:

In 1996-1998 NASCAR ran 3 exhibition races in Japan.  In the final race, Jeff Burton drove this car (depicted on the card) and Racing Champions included it in the 1999 lineup of 1:64 scale cars.  Jeff did well finishing 4th and leading 14 laps.  Racing Champions numbered the cards only on the package that year....this is #23 in the 83-card issue.

Wow, thanks again Billy, but I am "mad" at you.  I spent the last 20 minutes on eBay looking at all the other cool NASCAR Japan stuff and have 5 new things watched. 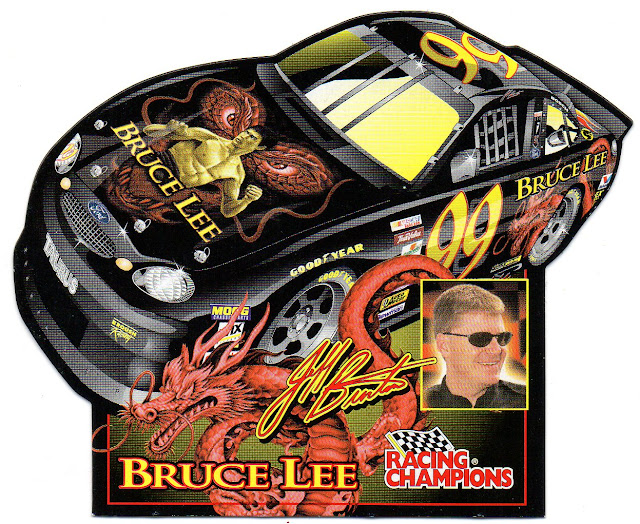 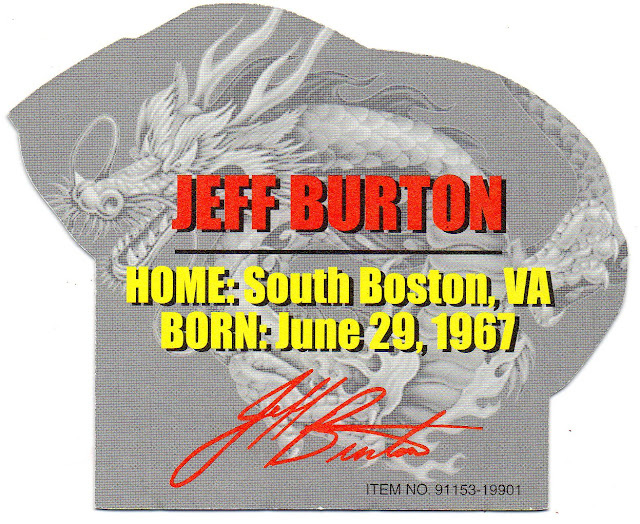 Posted by SumoMenkoMan at 4:00 AM 6 comments:

The flea market scene here in Germany is pretty legit.  There seem to be dozens around every community each weekend and even in the rain, the vendors are out braving the elements trying to make a Euro or two.  I stumbled upon these two albums and was able to snag them at a decent price.  I've seen them before, but have never been able to find ones that appealed to me.  These 1933 albums and cards were printed by the Salem Cigarette Company out of Dresden Germany.  The catalog numbers for Album #1 and #2 are 21903-5 and 21903-6, respectively.  The cards are amazingly beautiful with the gold ink and you can see how it reflects in the photos below.  There are some big names in these sets as well: Clark Gable, Greta Garbo, Gary Cooper, and John Barrymore to name a few.  Album #1 has 180 cards in it while Album #2 has 270.  I was looking online for a checklist, but wasn't able to find one so I'll post one to the Trading Card Database for Series 1 and Series 2.  Thanks for stopping by. 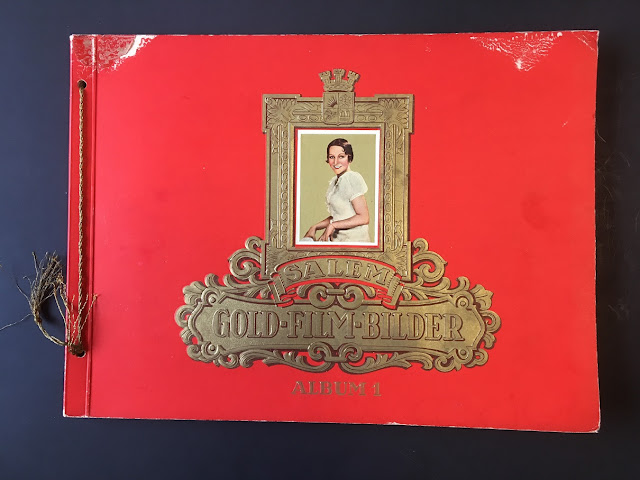 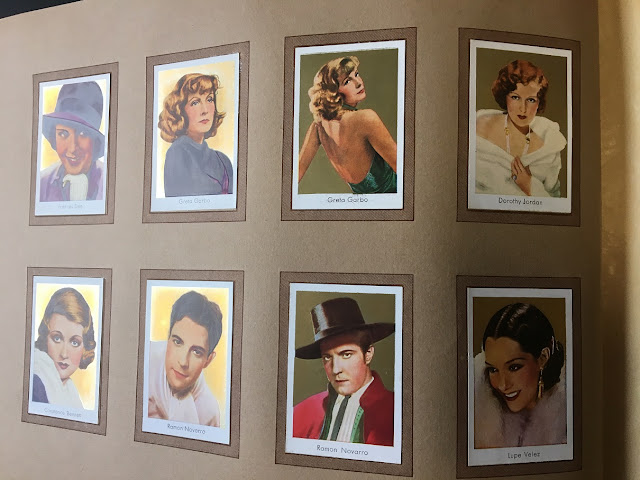 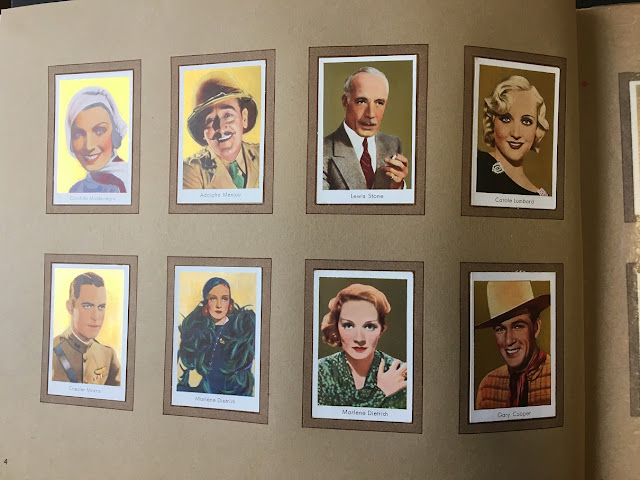 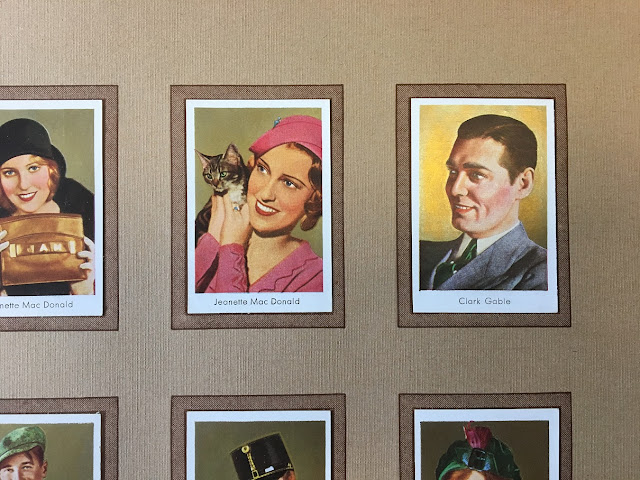 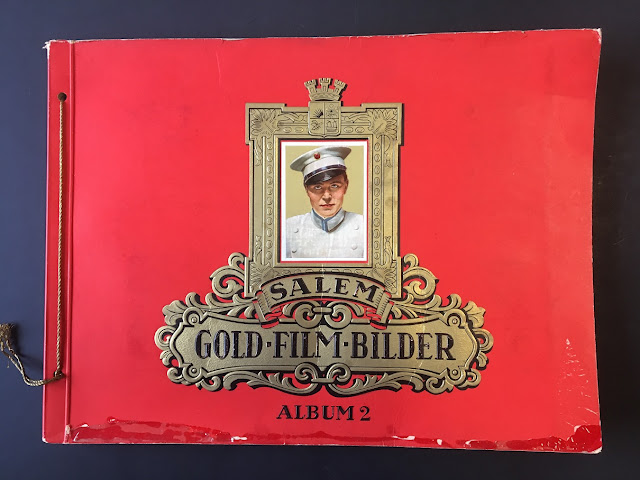 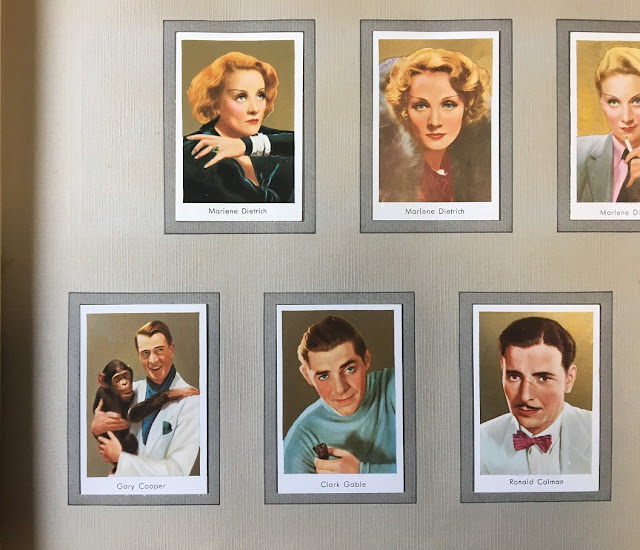 Posted by SumoMenkoMan at 3:00 AM 8 comments:

In the 1980s and early 1990s, Japan went through an extremely widespread and popular telephone card collecting boom.  Any and every subject was printed on telephone cards.  There were collecting magazines, collecting groups, and even investors who snagged up the plethora of cards that hit the market during this ~10-year timeframe.  The phone function behind these 2 1/8" x 3 3/8" flimsy plastic cards, beyond the collecting aspect, is simple.  Buy a card for a set price and you would be able to carry it around with you and make calls from any NTT telephone across the country.  This precluded you from having to carry any cash.  Once purchased these cards would be inserted into the public phone to activate the phone.  Simply make your call and when you are done, the phone would punch a little hole on the card to let you know how many credits you had left.  Once people started buying them to collect, rather than to be used, the phone companies pumped out the cards by the millions.  It was a almost like free money because a "punched" card was worth a lot less than an unused card.  People would buy them and store them away never intending to ever use them.  During this time, hundreds of different cards with sumo wrestlers were also produced.  Cataloguing them, however, is proving to be a little difficult.  At some point in 1991, NTT switched over from a standard back (shown below) to one with a barcode.  The pre-barcode cards actually had individual card numbers on the back.  Once they switched to the bar code, the barcode number stayed the same no matter what the subject was on the front.

It has taken me sometime to start working on cataloguing telephone cards.  Simply because they usually run around $10US per card...there still is a healthy market for the cards surprisingly.  Now that the number of new sumo wrestling menko and bromide cards being discovered is decreasing, I can focus more of my efforts to these modern collectibles.  I plan on cataloguing these telephone cards with the "CT" (Card, Telephone) prefix in the 5th Edition of my book.  Why the CT, and not just T or C?  Well during this time as well, Japan Railways issued similarly looking cards called Orange Cards, that could be used to pay for train travel.  I plan on cataloguing those as "CR" (Card, Railway).

This set is from 1990 and is significant since it captures four of the modern day Yokozuna as well as Konishiki, a popular, but controversial wrestler from Hawaii.  This is the first CT set I've catalogued and it will be forever known as the [CT901/1990 NTT Facsimile Signature Set] in my book. 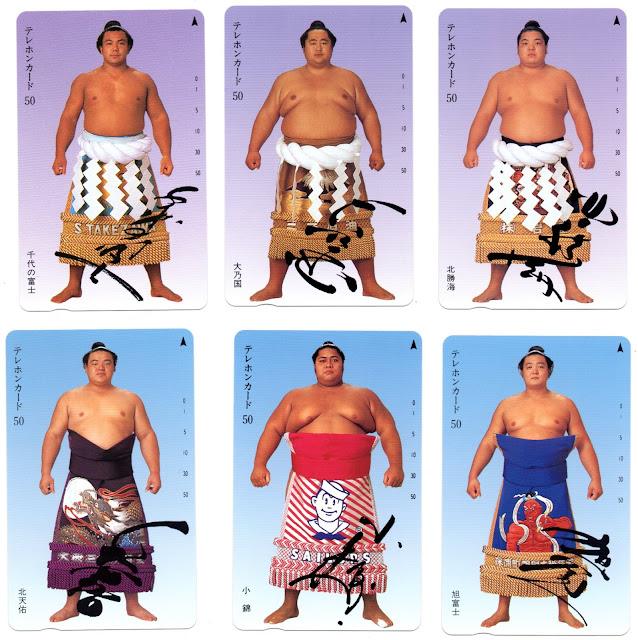 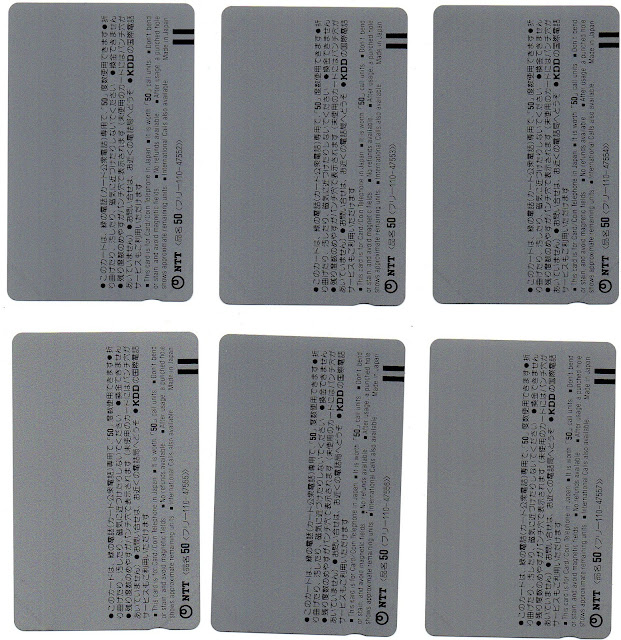 Thanks for stopping by.
Posted by SumoMenkoMan at 1:23 AM 3 comments: