I'm back in business after an extended break getting through Thanksgiving and turning in two mid-term papers.  I've been keeping up on my fellow bloggers' posts, but have failed to get one out myself in three weeks.  Hopefully I'll have time to get several more before the Christmas and New Years breaks.  This set has been sitting in my to-be-catalogued binder and is ready to get inserted into the 4th edition of the Sumo Menko and Card Checklist.
I picked this set up about a year ago and it is one of the popular R-series (Rikishi series) die-cut sets.  In fact, this is the latest one I have come across and have nailed it down to being produced in 1974...likely right in the middle of the year.  So far, these 8 menko are the only ones I have come across and there are some big names in the set.  Here is the checklist:

There are some big names in this 8-menko lot especially Takamiyama and Yokozuna Kitanoyumi who went on to become one of the greatest yokozuna of our generation. 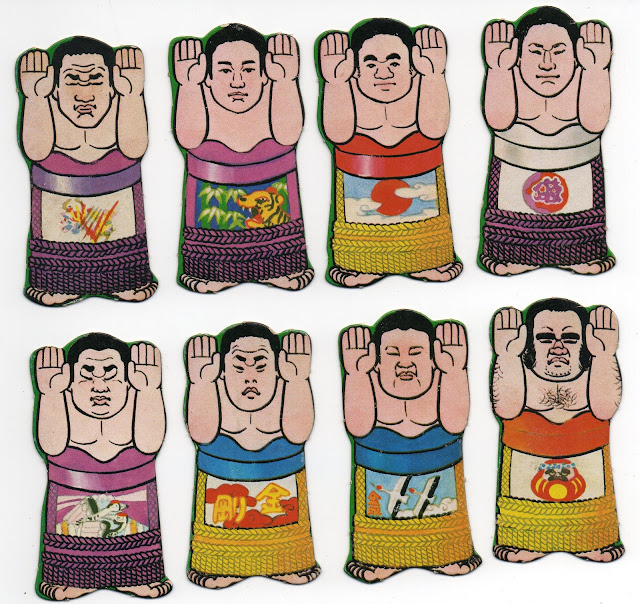 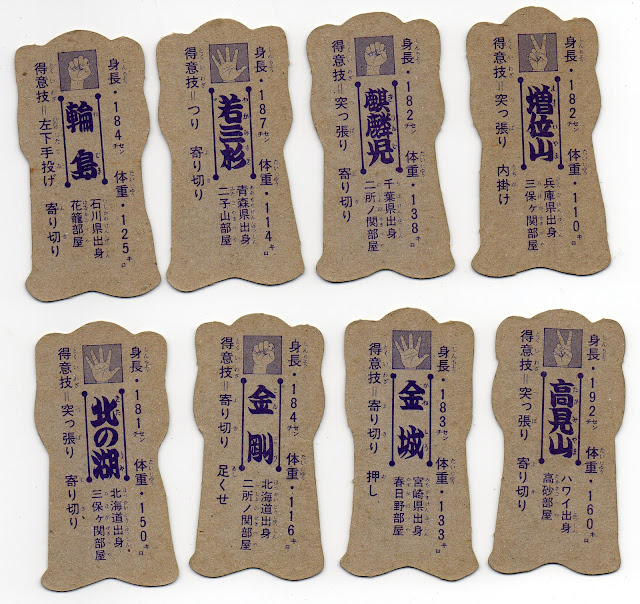 The menko have a great/manga like drawing of the rikishi's likeness on the front standing in their kesho-mawashi.  Notice the hairy chest on Takamiyama....he was one hairy foreigner wrestling in Japan.  This style of menko was very popular in the 1930s-1950s and so it is nice to see it revitalized here.  The backs have a wealth of biographical data on the rikishi (pre-internet goodness) such as height, weight, birthplace, stable name and favorite winning technique.  The rikishi's shikona (name) dominates the middle with a nice Gu-Choki-Pa symbol at the top.  Backs are printed in purple ink.

This is the only R-series set I know of that was printed in the 1970s and they are extremely hard to find.  They do look like they have been popped out of a sheet as there are little nubs around the edges of the menko.  A nice looking and rare set if you can get your hands on some of them.

Posted by SumoMenkoMan at 1:48 PM 2 comments:

The 1998 East Series set marked BBM's second year effort in the sumo card business as well as their second year of producing two annual sets.  The 1998 East Series set represents the 1998 Hatsu basho or 1998 New Year's tournament.  Like the 1997 set, this set is printed on high-gloss, high-quality card stock and each card measures approximately 2.75" x 3.5".   Cards came in packs of 8 with 30 packs per box.  This 218-card set is broken up into 9 subsets as follows:


#1-#106 Active Wrestlers
There are two cards each of the top 40 wrestlers (a squatting, pre-bout pose and a standing, kesho-mawashi pose).  For the lower-ranked wrestlers there is only one card each and they are standing in their kesho-mawashi.  Backs have the standard statistics and biographical information along with smaller inset photos. 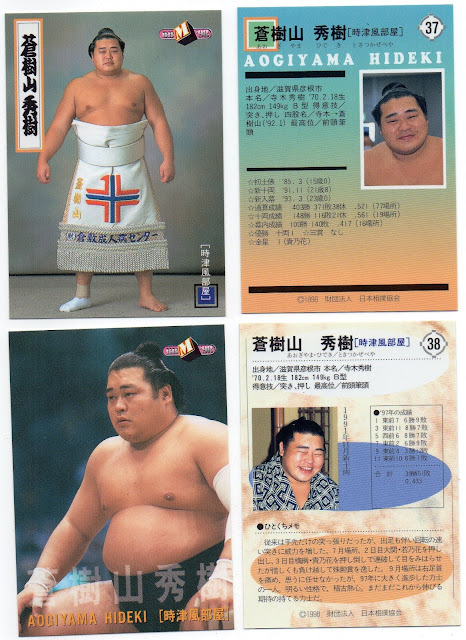 #107-#144 - Toshiyori (Sumo Elders)
Like the 1997 set, the 1998 East Series features cards of the elders of the sumo association..these are the guys that make it all happen and run the organization....all of them are retired wrestlers.  The fronts of the cards feature the elder in his active years and the back has anecdotal info along with career statistics. 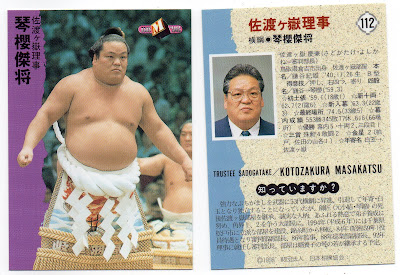 #145-153 - 1997 Winners
This subset shows the tournament winners (Makunouchi and Juryo) for the last three tournaments of 1997.  It also has the the special prize winners in Makunouchi.  The back has highlights of the tournament as well as an action photo during the match.  The wrestlers winning record is printed below the name as well as which tournament he won. 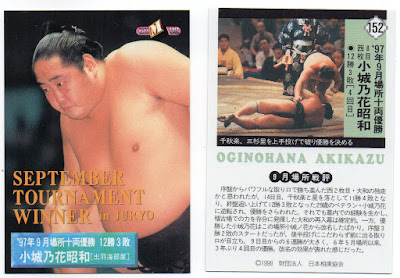 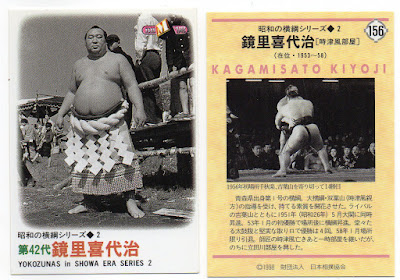 #164-#174 - Top 10 Kinboshi Winners
This subset features the top 10 wrestlers who have scored a kinboshi in their career (Maegashira-ranked wrestlers beating a yokozuna). Akinoshima had 15 throughout his career. 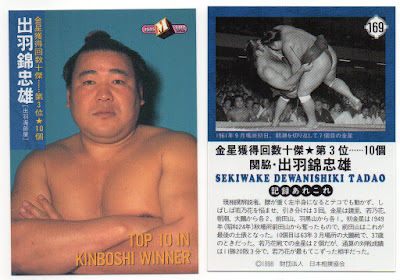 #175-189 - Maegashira Bashi Winners after World War 2
The lower ranked guys get no respect in sumo....unless they win one of the six annual tournaments.  This subset highlights the Maegashira-ranked wretlers who accomplished just that.  Notice the uncorrected spelling of ranks (lanks). 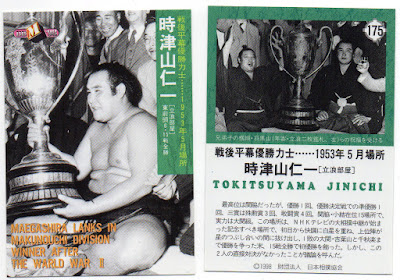 #190-#191 - Sumo Museum Collection
Another subset featuring items in the sumo museum.  Tow cards in this subset. 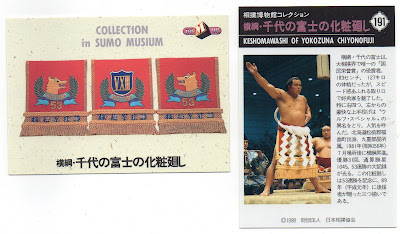 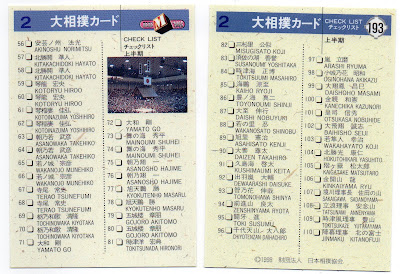 #R1-R18 Insert Cards
This short-printed subset is called Rivals in the 20th Century and feature the great rivals throughout the years.  The cards come in pairs as shown below for 9 total rivalries.  I think these were seeded maybe 1 or so per box.  The backs highlight the rivalry on one card and the win/loss record between the two on the other. 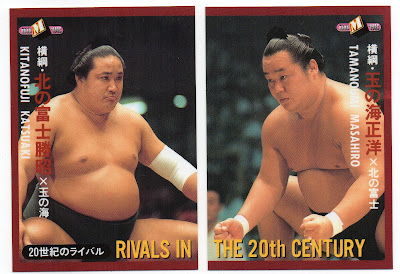 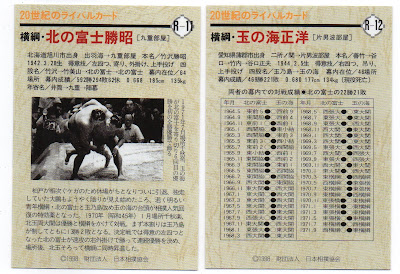 #S1-S5 Insert Cards
This short-printed subset feature a 3D like starburst with the wrestler's image slightly raised.  The back details their 1997 year in review. 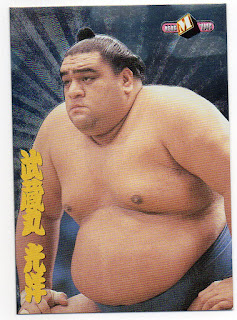 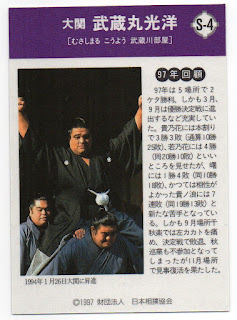 Posted by SumoMenkoMan at 5:54 PM 2 comments:

I love the odd-ball Japanese non-sports cards from the 1970s and especially these 1983 Myojo Noodles Mechanical Cards called Myojo Meka Kado (明星メカ カード).  These cards came affixed to the top of a bowl of instant noodles.  I wish I could find a picture, but was unable to come across one in my internet search.  There are six 30-card series that I know of: World Classic Cars, World Motorcycles, World Ships, World Jets, Space/NASA, and Star Wars.  For those that collect the Star Wars cards, expect to pay upwards of $30-$40 per card...it'll be in the thousands for sure to complete the set.  For the other ones, they are fairly cheap when they hit the market...~$5 each, but they rarely hit the market in quantity.  In fact, the Star Wars set is the easiest to find (it might explain why they are more expensive) and the Space/NASA sets are almost impossible to find.  The cards measure 2.25" x 3.5" and are printed on thick cardboard.  I hope to pick up a few more of these now and then and I am not sure I am ever going to complete a set.  Here are a few examples of the Classic Cars, Motorcycles, and Ships sets. 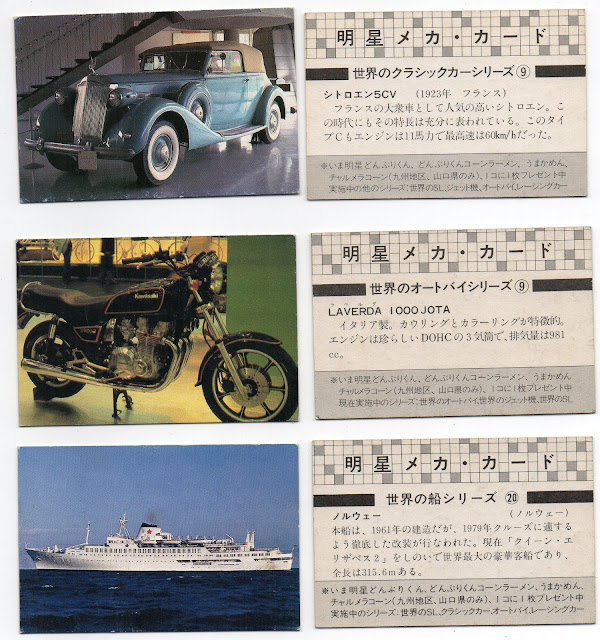 Posted by SumoMenkoMan at 6:08 PM No comments: