The World According to Byamba

Byamba entered the world of professional Japanese sumo with the rush of other Mongolian wrestlers in the early 2000s.  One of the greatest rikishi of all time is the Mongolian Yokozuna Hakuho who has sat on the top of the sumo world for the better part of a decade now.  Byamba (His shikona was Daishochi when he was in the Nihon Sumo Association) seemed destined for similar success, but was sidelined by an injury right before he broke into the top ranks and retired soon after.  After he retired from professional sumo, he turned to amateur status and won two Sumo World Championships in the heavyweight class as well as Gold in the 2009 World Games.  In 2013, Topps captured Byamba in their Allen and Ginter's "The World's Champions" set.  From what I gather there at ~10 different types of cards of Byamba in this set: 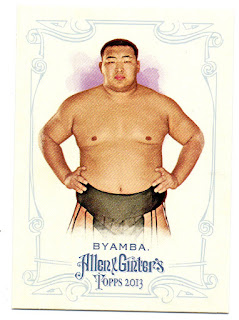 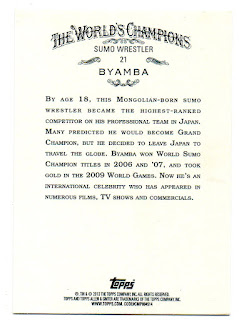 Good stuff.  I am hoping to slowly add more of these to my collection over the years.
Posted by SumoMenkoMan at 12:39 AM 2 comments: 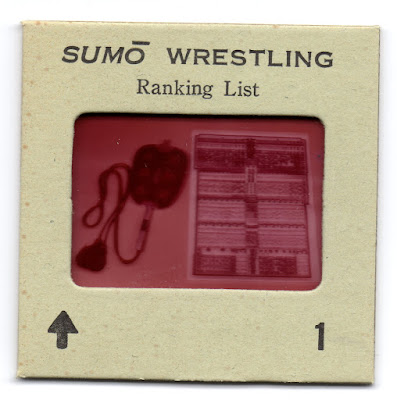 We've all heard, or maybe even experienced, the agony of being invited over to a friend's or family member's house for the dreaded minute-by-minute pictorial walk through of someone else's vacation.  A fancy 35mm slide projector was set up and everyone would gather around as the vacation was described and broadcast in painstaking detail.  I was never subjected this torture, but recently I stumbled across a set of 35mm slides produced by the Nippon Bunka Film Co in 1963.  These were mass produced and sold as souvenirs to tourists and travelers....so I guess you wouldn't have to take your own pictures and have them processed at the local store saving you a bunch of time.  This particular auction lot had 15 different boxes of various Japanese topics including Japanese sumo wrestling.  In each of these boxes is 10 35mm slides related to the box topic. 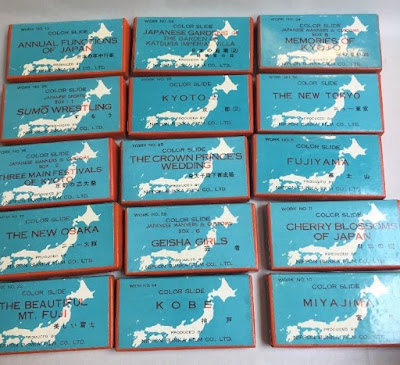 This series was marketed for English-speaking tourists as each box contained an English-language brochure highlighting all the different series (works) you could buy.  Additionally, there is a small booklet that describes each of the 10 slides in the box written in both English and Japanese. 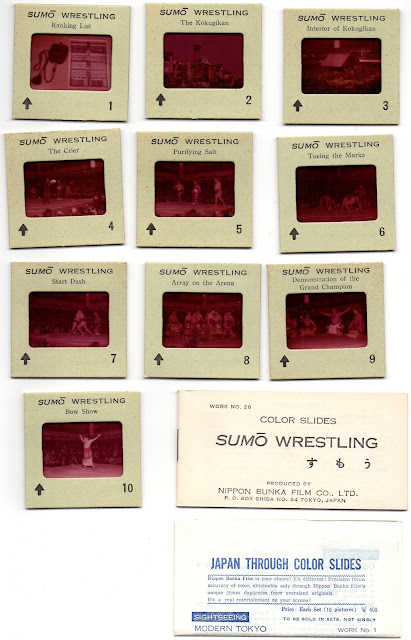 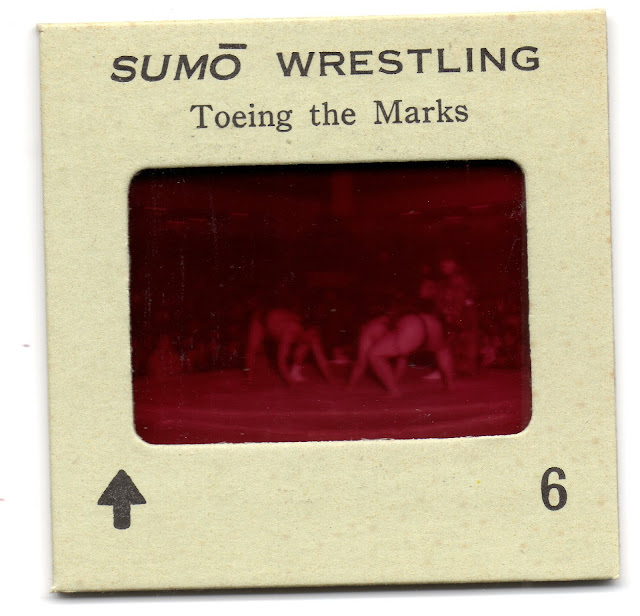 Anyone have any crazy slide stories?

And the big question....should these be collectibles in the sports card arena or am I just plain crazy?

Posted by SumoMenkoMan at 4:00 PM 6 comments:

From 1961, Fuji Television aired a showed about a young boy from the northern Japanese island of Hokkaido and his trials and tribulations trying to make it big in the world of sumo.  The show was somewhat popular in part fueled by the guest appearances from actual sumo wrestlers.  Capitalizing on the success of the show, Maruta produced a set of BC-series menko depicting various scenes from the show and what appears to be some behind the scenes views.  It is unknown how many of these menko there are, but likely somewhere around 32....needless to say they are extremely difficult to find.  I have accumulated 3 over the years and fortunately have one of Yokozuna Wakanohana (left side below).  Menkonohako has some great images of more of the menko including the one below of Daisuke getting some encouragement from his stablemaster.  There were manga printed to accompany the show as well.  I'd love to land a full set of these someday! 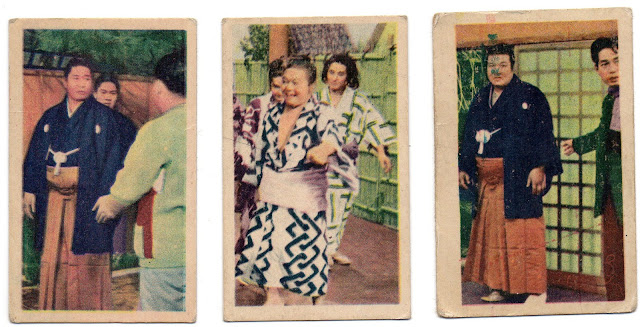 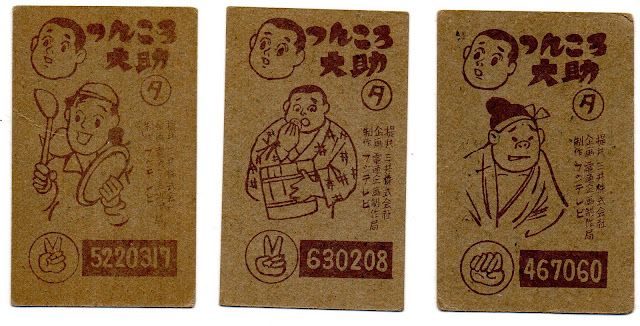 Posted by SumoMenkoMan at 4:00 PM 3 comments:

Tomorrow is the 16th Anniversary of the terror attacks on 11 September, 2001.  It is difficult to fathom how quickly the time seemed to go, but it is one of those world-changing events that we'll all be telling our kids and grandkids about for the rest of our lives.  I hope everyone is able to take a moment of remembrance.

In a similar vain, the U.S. would official be thrust into World War II with the attack on Pearl Harbor in 1941.  Up until then, Japan was engaged in a brutal and horrific war all throughout the Pacific.  The war had permeated all throughout Japanese society and it is hard to imagine anyone in Japan not affected by it in some way or another.  I recently picked up this 1938 set and the war's stark reminder was boldly embellished on the kesho-mawashi of the wrestlers: a rising sun flag, bombers, fighters, cannons, and gas masks.  These are just a few of the reminders the wrestlers and Japanese society were faced with.  I am hoping to pick up more menko from this set.

As always, I find it amazing that these survived the war, the paper drives, and the post-war years fairly unscathed.  I was lucky enough to get them inserted into the 4th Edition of the Sumo Menko and Card Checklist right before printing and now the set is permanently documented for future generations. 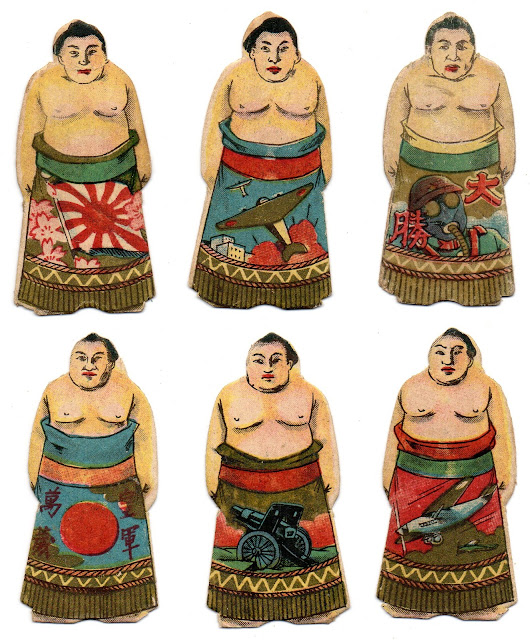 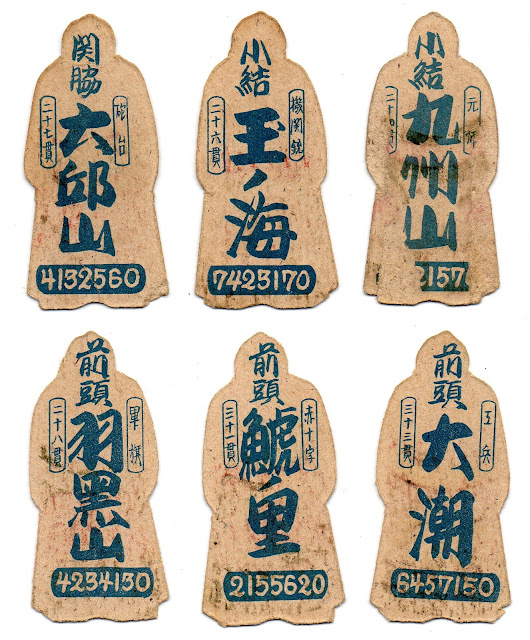 Posted by SumoMenkoMan at 9:15 AM 3 comments:

The German card market has a wealth of cards that seem fairly undiscovered on the other side of the Atlantic.  This set is one of them in the fact that it contains the earliest known Good Year Blimp Card...the "Pilgrim."  While the Pilgrim wasn't the first blimp built by Good Year, it was the first to have the words Good Year printed on the side.  This 1932 German "Die Eroberung Der Lift" (The Conquest of the Air) set was the first to capture the iconic Good Year Blimp image on a card.  In fact, the only other cards I can find of the early Good Year blimps are postcards.  This set was made to collect and paste into an album which was typical of the German tobacco sets of this era.  Surprisingly, this small lot of cards I won at auction survived this pasting fate.  Köberich catalogues this set as the 20703-5 and it chronicles the history of human flight over 234 cards from mechanical wings on humans to passenger aircraft and blimps.  Each card measures approximately 2 7/17" x 1 9/16". 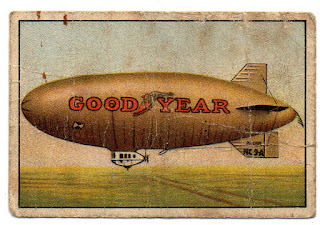 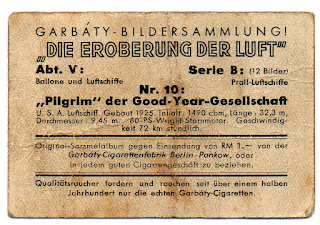 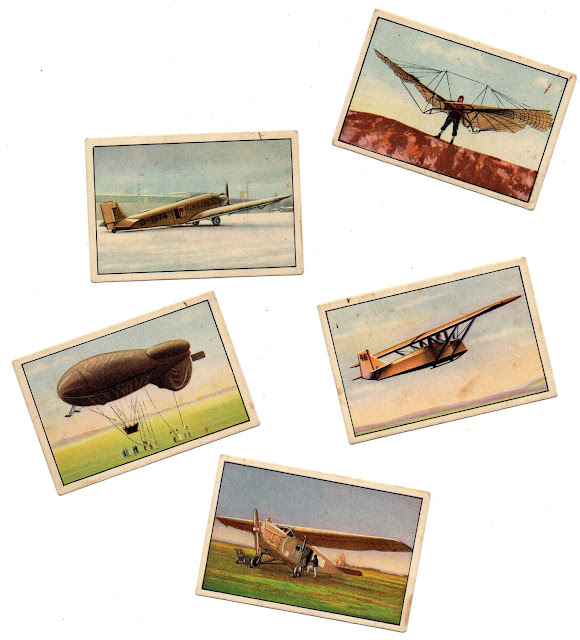