Back in the day, before sumo wrestling cards took over, I was a big baseball card collector.  I was fortunately to work at a card store for most of my high school years to fuel my passion, but the combination of the 1994 strike, going to college, and the overwhelming number of baseball sets being produced killed my collecting mojo during the late 1990s.  However, before it was totally dead I had some of my Japanese friends pick up some Japanese baseball card packs for me during my freshman year of college.  This weekend, when I was tidying up the basement, I came across the packs.  Before anyone gets too excited they were already opened, but I apparently only cut off the top of the pack and then slid the cards back in after I was done looking at them....typical me of the era.  So 20 years later, here I am again getting ready to open/reopen them and see what lies within.  All the cards appear to be in the 6 different packs so it's really like I never even opened them....my memory of what lies within long ago faded.  I'm a true amateur when it comes to Japanese Baseball stars so all I'll really recognize is Nomo, Ichiro, and Matsui.  I'm using Engel's book as a guide to see how I fared.  The packs are as follows: 1995, 1994, 1993, 1992 Series 1, 1992 Series 2, and 1991.  Wish me luck. 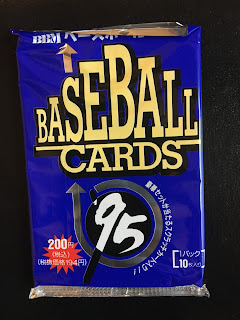 No Ichiro and the best card it looks like is #349 of Kazuhiko Ishimine.  I do like the hologram on the back...reminds me of Upper Deck! 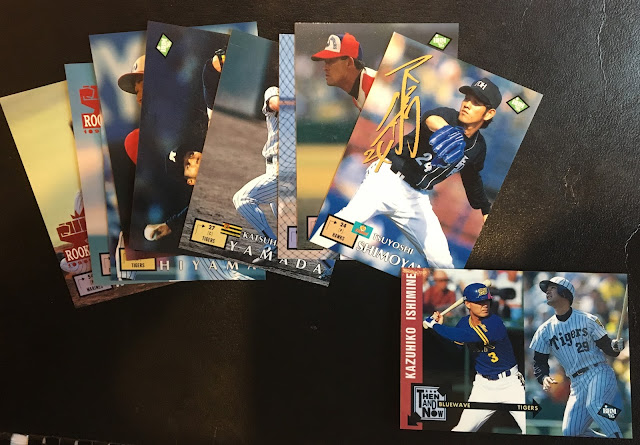 Alright, 1994 here we go.  Looks like Matsui and Ichiro are the ones to get here.  Engel also states that cards #1-42 are scarce.  10 cards in this pack as well No whammies! 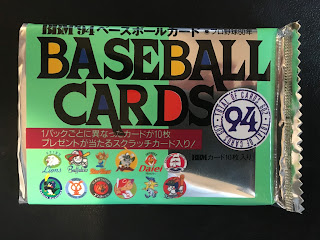 Okay, another so-so pack.  Card #553 looks to be my best card "Power Aplenty" (Bryant and Winters) 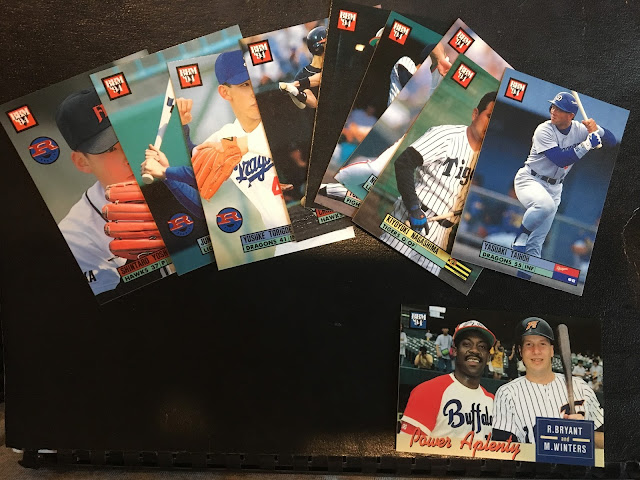 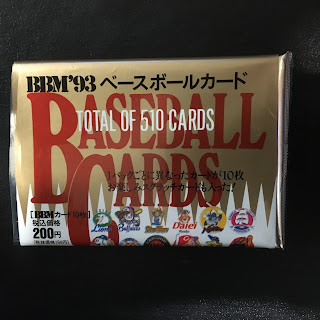 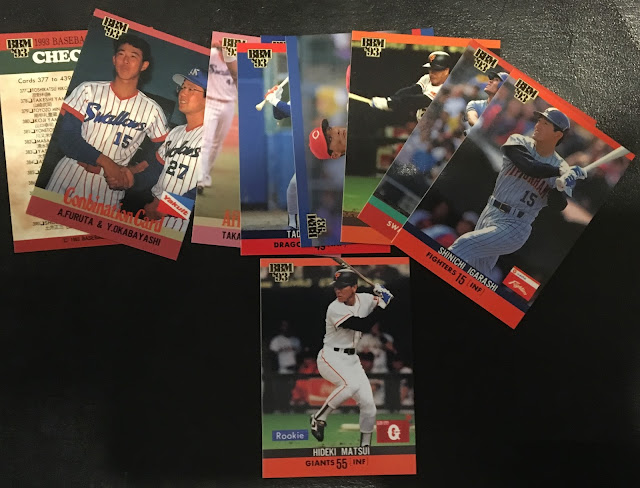 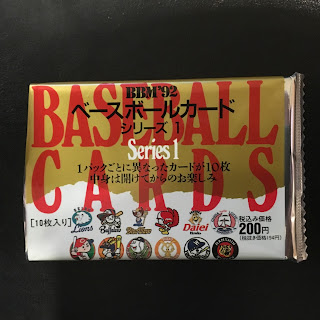 Nothing at all to report in this one. 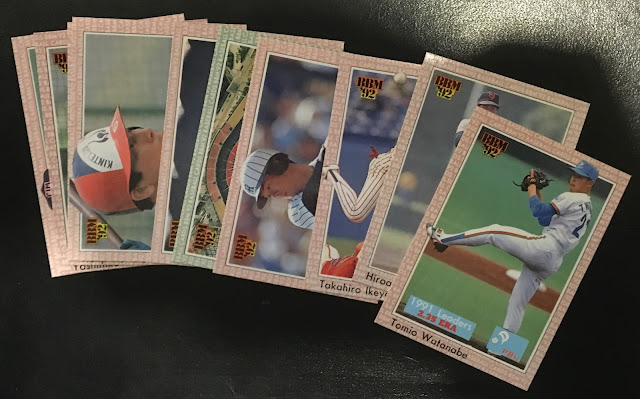 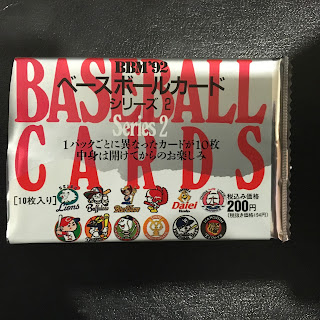 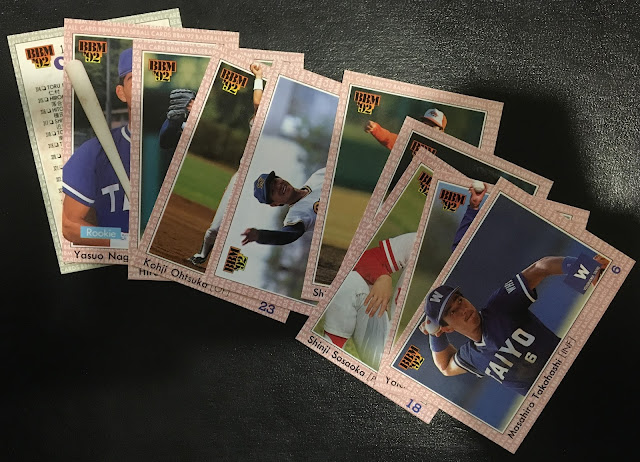 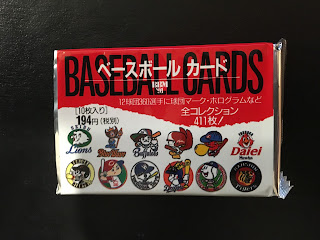 Not bad it seems.  I did get an Oh card...and for some reason this pack has 3 American players in it. 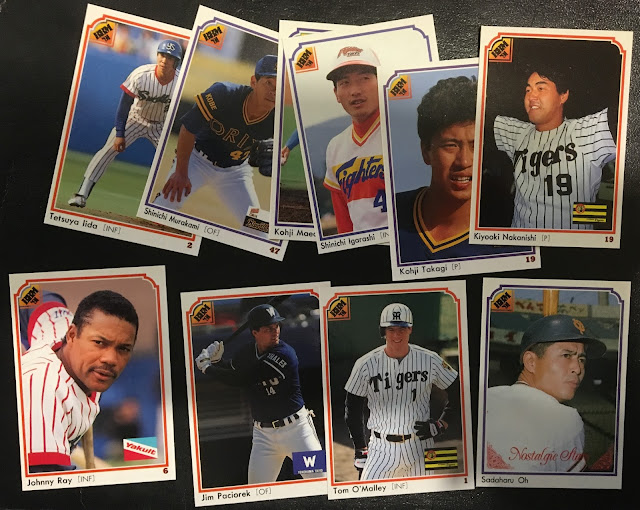 Here is what I ended up with:

Well that was definitely fun and some great looking cards these early BBM releases are!  A great way to spend an hour on a Saturday.

I'm usually a player at most sumo menko and card auctions when there are items that I don't have or I see something unique.  However, one set that I am far from completing and will likely not complete anytime soon is the 36-card 1973 Calbee Sumo Set.  Baseball Card collectors are probably envious as this is the one and only Calbee set ever printed of sumo wrestlers.  And for some reason that I'm still trying to figure out, this is THE MOST expensive sumo menko or card set in existence.  The average price for one of the more common cards is over $100 and the Yokozuna cards can bring easily $300-$400.  I can pick up 1800s menko for fractions of the cost that these cards command.  Additionally, there are menko sets from the 1930s and 40s that are much rarer than the Calbee set, but they don't come close to what collectors are paying for this 1973 set.  And these cards are always up for auction, although some more often than others.  I think it has to do with supply and demand as there are a lot of collectors that remember these from their childhood and are building the set now that they have more expendable income.  This set, like most of the cards at the time, are aimed at the older crowd and weren't marketed as menko or mini cards, which were really aimed at the kids of the day.  I've read on some Japanese blogs that the Calbee sumo card sales were a huge failure and that is why you didn't see any further sets produced.  I'm not sure why they wouldn't have been popular, but baseball cards were also sold the same way and must have been much more popular and profitable.

These cards were issued in bags of potato chips and came one per bag and measure 2.25" x 3.25".  The rank at the time of printing represented the Nagoya 1973 basho.  Perhaps the most significant cards of the set are the #11, #32 and #33 debut cards of then Komusubi Takamiyama (American Jesse Kuhaulua) who was the first foreigner to win a tournament.  Although Takamiyama has other 1970s cards, these are by far his earliest. 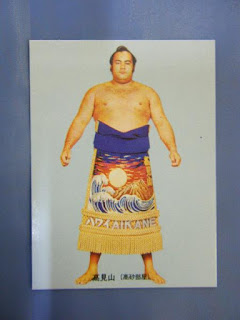 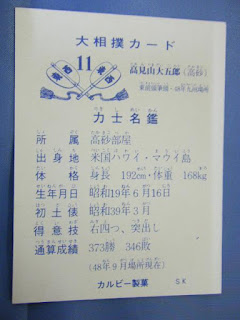 
There is also an album that accompanies the set and is meant to hold all 36 cards.  It is unknown how to acquire this set, but likely from sending in payment as a special offer. 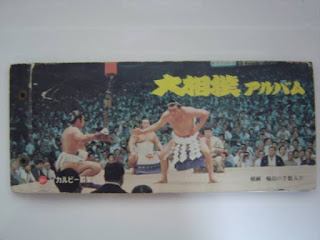 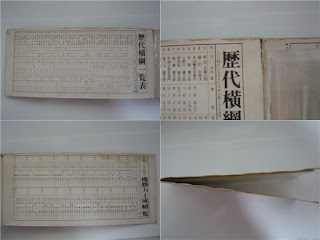 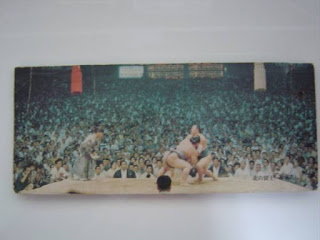 Front, Middle and Back of the Album

Someday when I have "conquered" the older stuff, I plan on completing this set along with other modern BBM sets.  Hopefully the supply will still be there when I decide to jump in and invest my time and money.

Sorry for the long delay in posting.  Work took me away for 10 days and am now back.  Since my last post I received the latest copy of Sports Card Magazine #116 from Japan with the 6 cards attaching inside in a nice paper envelople.  NPB Card Guy over at Japanese Baseball Cards had a nice write up on the contents of this issue which mainly focuses on baseball releases.  You can read it here.

The sumo card world does not have nearly as many new releases so this issue was fairly light on sumo news, although one of the 6 insert cards was of newly promoted Ozeki Kotoshogiku.  These insert cards are also unique as there are purple foil parallel versions as well that you can randomly pull from the magazines. 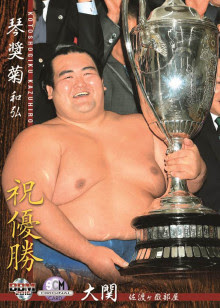 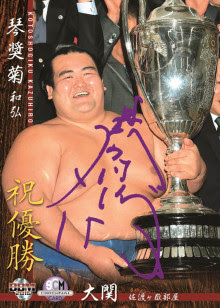 SCM issue #115 highlighted the newly released 2016 Regular Sumo BBM issue, but didn't checklist the 10-card signed card subset.  Issue #116 includes it in the back on page #126 as follows (ranks as of the March 2016 tournament):

The hot cards are obviously the Chiyonofuji as well as the Ikioi who has become quite popular after winning the runner-up championship a few tournaments ago.

Until next time, cheers!
Posted by SumoMenkoMan at 2:19 PM No comments: