For those of you who are collecting the 2014-2020 Airport Trading Cards, I hope you have good luck on the last five cards needed to complete the 156-card master set....I've dubbed them the "Dirty 5".  Several fellow collectors and I just can't seem to find these last five cards.  Rumors are abound that the cards exist, there are images of them on the internet, but no one seems to have any and they don't pop up for auction.....or hardly at all.  And 4 of the 5 cards are from large, well-traveled airports which makes it that much more odd on why they are so hard to find.  Here are the "Dirty 5":

If anyone out there has any of these 5 and is willing to part with them, let me know.  I will make it worth your while, promise.

I was able to whittle away at the 156-card master checklist this past weekend picking up these 7 beauties and knocking down one from the tough 2014-series, MKE.  COVID has made a lot of the airports rethink if they would issue a 2020 series which has allowed me to catch up a bit instead of new cards again flooding the market.  Usually at the annual conference of the Airports Council International - North America (ACI-NA) the new series of cards are revealed as "new" airports hop on board this fun collectible program to help promote their airports...or the "old" airports reveal the next card they will produce.  However, this year the conference was cancelled and I have not heard a peep if 2020 will up the 156-card master checklist again.  Oh well, this has been an awesome set to chase. 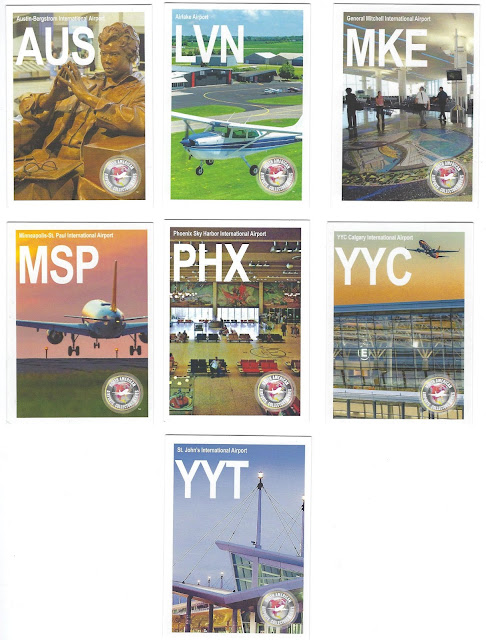 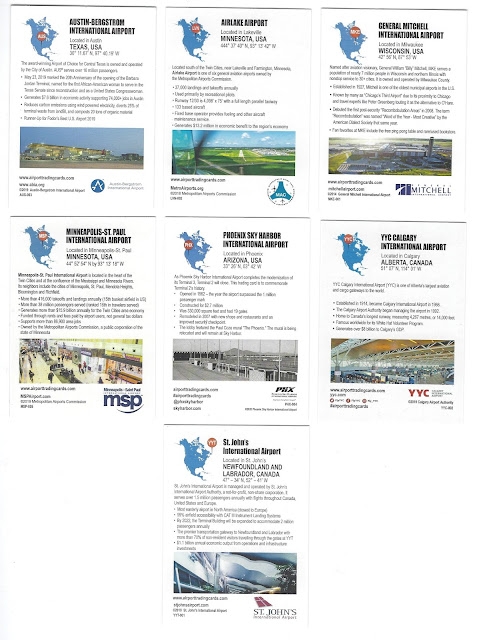 Anyone else out there collecting these?
Posted by SumoMenkoMan at 2:00 PM 5 comments: 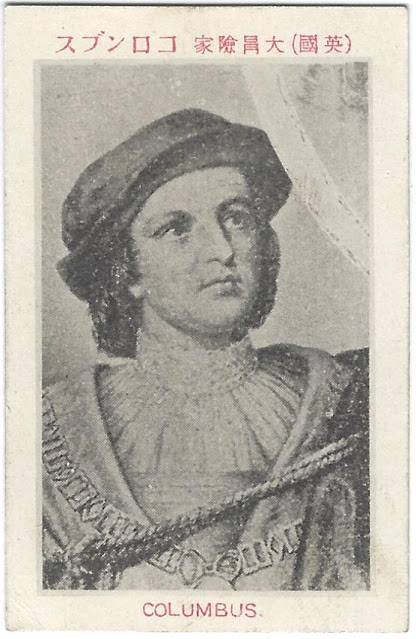 Today is Columbus Day, but I think the writing is on the wall that this day ought to celebrate the Native American population that was here long before Columbus set foot on what is now American soil.  But 100 years ago, history told a different story and he was revered for being the founder of the land we call The United State of America.  About 100 years ago in the 1910s or 1920s, this set was printed in Japan to capture 32 historical figures from around the world.  Columbus was a worldwide name at that time and the Japanese adorned him on one of the cards from this set.  In reality, it is a pretty neat set that captures some great historical figures.  Check out this checklist of Who's Who in History that earned a card along with a few samples: 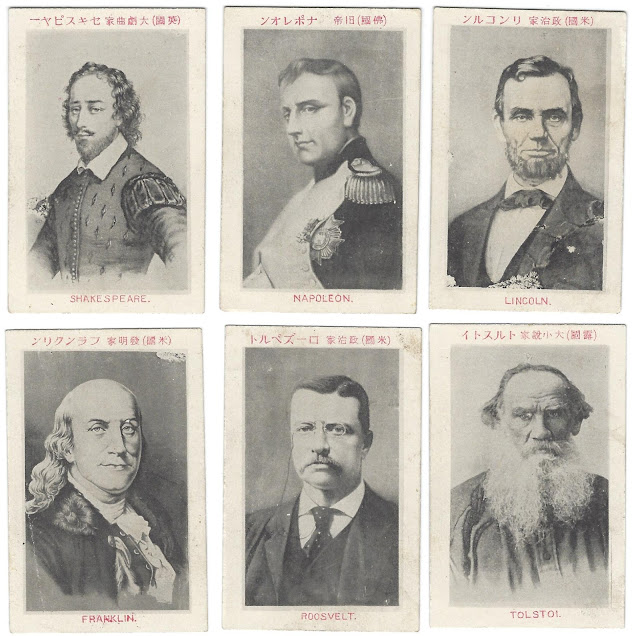 Have an awesome week!

The Mystery of the 1955 Parkhurst Sumo Wrestlers #60

I'm not sure if it has ever been discussed before, but who are the mysterious "sumo" wrestlers on the 1955 Parkhurst Wrestling #60 card?  I've seen this card for several decades and have never owned a copy.  Not sure why, but I have never pulled the trigger on owning one.  I think the main reason is that the "sumo wrestlers" that are on the card are actually former sumo wrestlers that switched over to pro wrestling after their active sumo years were over.  This was quite common and a lot of the early Japanese pro wrestlers started in sumo wrestling.  The main clue that these three wrestlers were not active in sumo when this card was made is that their hair is cut and not formed into the instantly recognizable chomage, or ginko leaf, style.  Let's find out who these mystery men are. 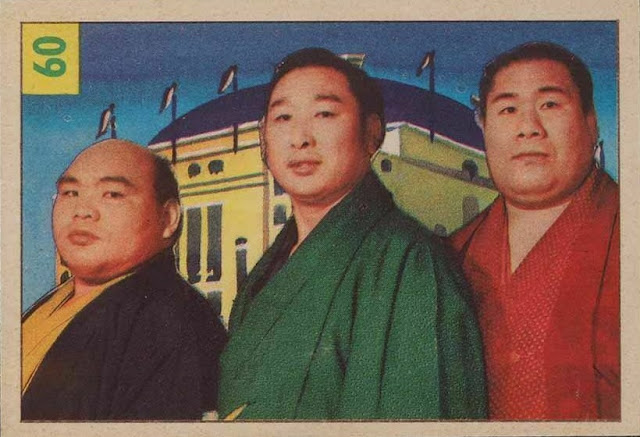 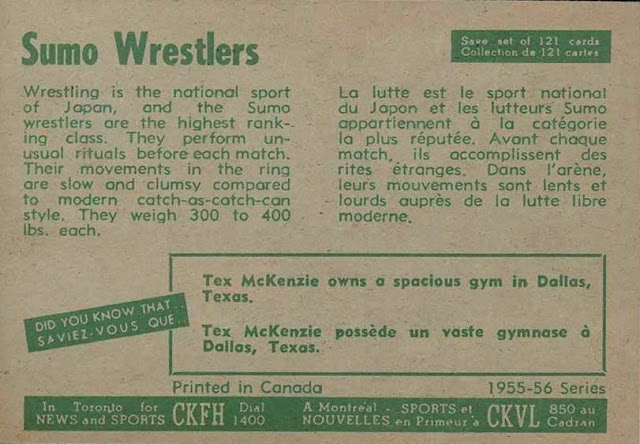 I recognize one of the wrestlers instantly - Azumafuji.  He is on the far right.  He retired in 1954 from sumo wrestling and turned to pro wrestling with some mild success in the mid-1950s.  He was also a Yokozuna, or Grand Champion, in sumo so his departure from the world of sumo into the world of pro wrestling was extremely controversial at the time.

The middle wrestler looks like the famous Rikidozan.  He too started off in sumo wrestling and was fairly successful, but called it quits in 1950 and entered the pro wrestling world soon after.  Probably the most famous pro wrestler in Japanese history.

The wrestler on the far left I believe is Fujitayama.  He was part of the same sumo wrestling stable as Azumafuji and they likely left together in 1954 to enter pro wrestling, although I am not certain on that.  No successful in sumo and doesn't appear he was either in pro wrestling.

It's sad that the back of the card does not promote the sport of sumo well.  It calls the movements in the ring slow and clumsy which, in my opinion, is far from the truth.

Well, there you have it.  My little bit of mystery solving to advance the trading card community.

Have a great week!  Cheers!

Posted by SumoMenkoMan at 2:00 PM 9 comments: