The C-series or Circle menko are extremely hard to find and approximately a dozen sets are known to exist from the late 1800s to the end of the sumo menko era in the mid-1960s.  This seems very unusual since the circle, one would presume, would be the easiest and simplest shape to produce.  Manufacturing Circle series menko also wastes a lot of paper and in the thrifty world of Japan, this could have been the reason so few C-series menko were produced.
The earliest known C-series sumo menko were elaborate woodblock menko from the late 1800s (See Picture 1).  However, the more popular themes for the 1800s C-series menko were soldiers, samurai and Japanese folklore characters.  Little is known about who actually printed paper menko this early, but historians believe they were first printed by local street vendors in Nagoya in the 1870s/1880s along with the standardized rules for the game.  There is evidence through books that they had made their way to Osaka and Tokyo by the turn of the century, however.
C-series sumo menko are very simple in their design and all known sets in existence have blank backs.  The front usually has the shikona, rank and a fighting number and in some instances a Gu-Choki-Pa mark.  Almost all are printed on a thick cardboard paper and measure about 2” in diameter on average. 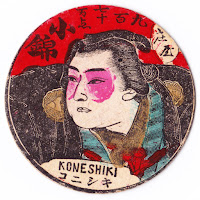 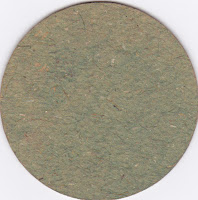 There were only a few C-series sumo menko sets produced up through the mid 1940s.  Probably the easiest of all C-series sets to find is the 1935 Mini Disks that show different kimarite being performed by two generic rikishi or just a bust shot of a generic rikish (See Picture 2).  I theorize there are upward of two dozen different menko in this set, but so far I have only seen 9 total.  This set is small in comparisons to other C-series menko and measure approximately 1” in diameter.

In the 1940s, and especially the late 1940s, there was a “flurry” of C-series sumo menko and about seven sets were printed during this decade.  All sets have only one or two known examples in existence except for the 1948 Large Disk set which had 3 rikishi printed with 9 other menko of baseball players, American military men and samurai (See Picture 3).  This set is the easiest of the C-series menko to find, but still very difficult to find out of all sumo menko. 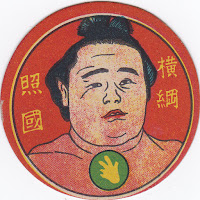 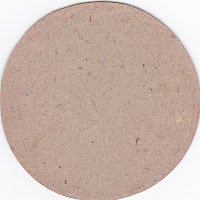 Then there was nothing.  After a few sets in the early 1950s, there are no known C-series menko made after that.  If there were, they’d be very rare and expensive indeed.  I wish I had more to write about C-series menko, but there are just so few examples in existence and very little information about them.