Most U.S. modern card collectors grew up with bubble gum inserted along with their trading cards.  In fact, in the early days of collecting in the U.S. it was actually the cards that were inserted along with the gum.  Gum was the primary product and cards were issued along with them to help sell the gum.  Later on it was the gum that was inserted in an attempt to sell more cards.  However, in Japan issuing candy with cards and menko was very rare.  In fact there are only 4 known sets of sumo cards issued with candy and gum and those will be explored in a little more detail below.  There are several more single cards out there
The first known sumo set to be issued with candy is the 1959 Karuso Cookie Set which was issued with boxes of cookies.  These were color cards printed on thin paper and meant to be collected and then redeemed for prizes or more cookies.  Unfortunately, there are no names on the cards so some rikishi are almost impossible to identify.  There were several ways to win prizes.  The first way was to collect 4 cards that when put together would form a picture of a cartoon character called Tankuro which was a sort of samurai character.  These could be traded in for a box of cookies according to the back of card.  Also, each of the cards has certain points on them and if you collected enough points you could trade them in for different prizes.  For example, if you collected 70 points you could win a pocket knife and for 100 points you could win a ball pen.  For 200 points you could win a baseball.

A few years later in 1961 the Kabaya Candy Company issued a set sumo cards along with sticks of gum.  These cards are relatively small (1” x 1.25”) to any other cards produced during this time.  Additionally, these cards aren’t full color and use only three colors on the front: pink, red and black.  The backs come in either red or green ink.  The backs indicate that there are 2 Yokozuna cards, 6 Ozeki/Sekiwake/Komusubi cards and 22 Maegashira cards for a total of 30 cards in the set.  However, these cards are very hard to find and there has yet been a Yokozuna/Ozeki/Sekiwake/Komusubi card to surface since I have been collecting. 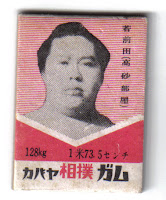 The following year in 1962 the Kabaya Candy Company issued another set that was very similar in size and shape as the 1959 Karuso Cookie set.  It is unclear what product they were issued with, but most likely gum like the previous year’s issue. These cards are printed in color on thin paper and each of the cards has points on the front that could be redeemed for prizes if you collected enough of them.  Because of their scarcity I have only seen 30 and 50 point cards, but there would have to be higher denominations since some prizes required 100,000 points.  Some of the prizes that could be won are a clear file for 1,500 points, an eraser for 5,000 points or a globe for 50,000 points. 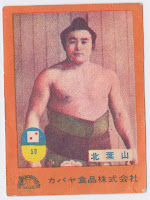 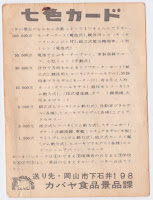 The last candy card set was issued in 1964 by the Morinaga Gum Company.  These cards are very large, approximately 3.5” x 5.5”, and are printed in full color.  What is unique about these cards is there are made to be stand-ups and have die-cut backs in order to stand them up.  The backs contain information about how to pop the stand out and display the cards.  These cards are extremely hard to find and are expensive when they do come up for sale.  It is unclear exactly how they were issued because of their large size.  It might be that kids would get a winning wrapper with their gum and could redeem it for one of these large cards. 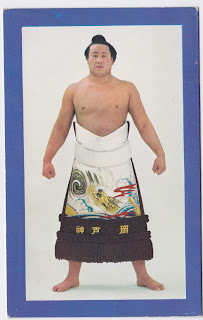 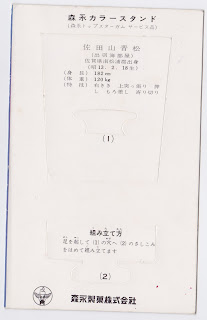