There are 13 different shape types or categories of sumo menko ranging from your typical square shape to elaborate die-cut and flower cut menko.  Every sumo menko and/or sumo card is categorized by one of these types and is the basis for the sumo menko catalog number system.  However, to really understand the system it is important to have a good knowledge base of the 13 type categories.  Here we’ll talk about what I’ve termed the Rikishi-series or (R)-series of menko.  The Japanese word for the R-series menko is Hitokage Menko, or literally Portrait Menko, and these menko are very popular on the secondary market because of their unique shape.  In fact, these menko will usually command a premium 2 to 3 times that of a rectangular shaped menko.  The earliest known R-series set is the 1911 Kyoiku Rikishi 8-10-11-12-13 set printed by the Kyoiku Gangu Company (See Picture 1).  This set was presumably printed to teach kids about large numbers in both the Japanese kanji system and English number system.  There are probably less than a dozen R-series sets made between 1900 and 1930 that survive today and I’ve only seen about 5 sets in all my years of collecting sumo menko.

Between 1930 and 1961 there were more than 50 R-series sets printed with the most being from the 1930s era.  Unfortunately, there is very little information on which companies printed which sets and so that data has probably been lost to time.  The very unique aspect of the late 1930s and early 1940s sets is that most of them depict war images on their kesho mawashi and show a general sense of patriotism (See Picture 2). It is amazing that any of these sets even survived the war and all the destruction to Japanese cities.  Even more surprising were all the sets that survived in spite of the large number of paper drives that the Japanese governments held to support the war effort.

After the war ended, from 1945 to 1950, there were only a handful of sets even printed because of the severe economic hardships that the Japanese people were enduring.  Many Japanese couldn’t even afford food, let alone “frivolous” items such as toys and games.  In the early 1950s, however, there was an emergence of menko that were printed in an effort to increase the basic knowledge of Japanese children especially in the area of math.  One such set was the 1950 Rikishi 2 Set which has a simple math problem for kids to solve and would be used to play menko(See Picture 3).

Picture 3 (R501): Yokozuna Azumafuji with a simple math problem for the Fighting Number, 1950


The 1950s saw a modest reemergence of the R-series menko which resulted in the colossal 1953 Kagome Rikishi 7 set, which has historical significance because of the 7 Yokozuna and 4 Ozeki that appear in the set at various stages in their career.  For those that collect American baseball cards, this set is comparable to the 1952 Topps set in terms of rarity, physical size and star power. 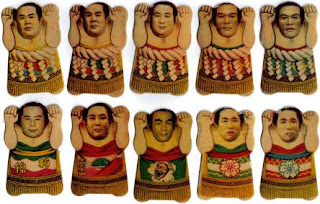 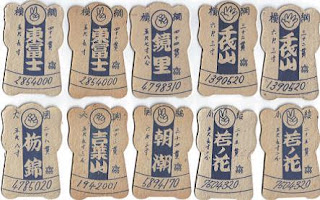 By the early 1960s, the sumo menko era was coming to a close because of Japan’s increased status across the globe and the pressure for kids to focus more on schoolwork and less on games.  Also, television sets were in almost every Japanese home which occupied more and more of kid’s free time and left less and less for menko.  The last R-series menko was made in 1961 by the Hoshi Gangu Company and included Taiho and Kashiwado who would carry sumo through the 1960s.  However, this set was a half-hearted attempt and the quality control and images were very poor.  Unfortunately, a sad-ending to an otherwise popular and unique category of Hitokage Menko, Portrait Menko and Rikishi Series sets.