Japanese card collecting is still somewhat of a novelty outside of Japan.  Even within its borders, Japan has not produced a comprehensive guide to collecting older sports cards, nor does it have a catalog to capture set checklists.  Doing so has mainly been a non-Japanese endeavor.  The two tomes that try to conglomerate this information are the Japanese Baseball Card Checklist and Price Guide (by Engel) and my Sumo Menko and Card Checklist.  One interesting and useful bit of information is what Engel calls the "Scarcity Factor" and what I've called the "Availability Rating".  Our goal is to try and give readers/collectors an idea of how hard some of these cards/sets are to find.  Engel's approach is to try and estimate how many cards in a particular set are still in existence.  Here is Engel's Scarcity Factor scale applied to each baseball set:

My approach is from a slightly different angle and I have calculated/estimated/guessed how hard it would be to find a sumo menko/card if you wanted to go out and purchase one today.  My scale is from an auction or purchasing point of view and basically how long it would take for one to pop up at auction if you were looking today.  He is my Availability Rating scale applied to each sumo set:


Here are menko from the Extremely Rare R378: 1937 Rikishi Gunbai 5 set.  In almost 20 years of searching, here are the only 4 menko that have showed up while searching. 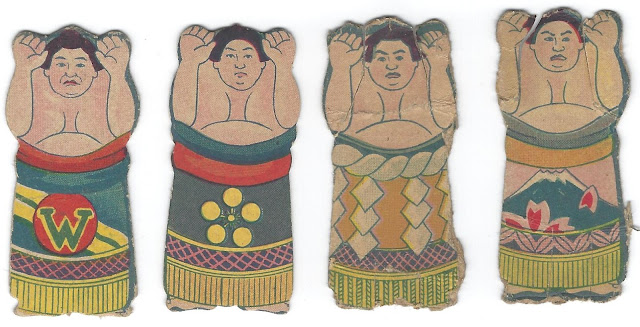 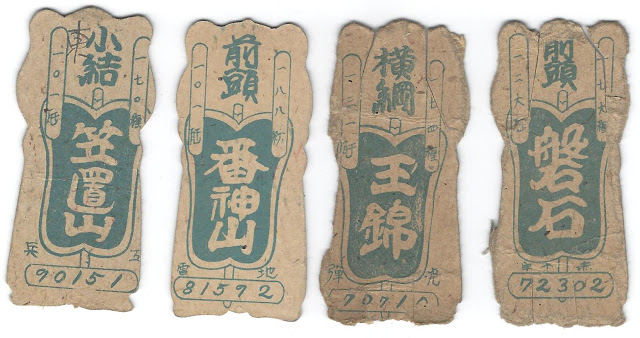 Posted by SumoMenkoMan at 3:00 PM