Japanese baseball and sumo wrestling have shared some common history.  Athletes from both sports often intermingle with each other.  Sumo wrestlers get to throw out the first pitch at games and baseball players will sometime swing by the sumo stables to eat with the top wrestlers.  In 1959, sumo and baseball were at equal pinnacles with strong Yokozuna and the emergence of baseball stars like Nagashima and Oh.  This transcended to cards as well as shown here.  Issued in the January 1959 Omoshiro Book (おもしブック), these two sheets of cards contained 16 sumo wrestlers and 16 baseball players.  When cut, each card measures approximately 1 5/8" x 2 1/2".  Catalogued as the Z591: 1959 Omoshiro Book Zashi 0 for sumo and the JBR60: 1958/1959 Omoshiro Book set for baseball, these cards are somewhat hard to find....I've only seen three sets in close to 20 years.  Here is the checklist for both sets: 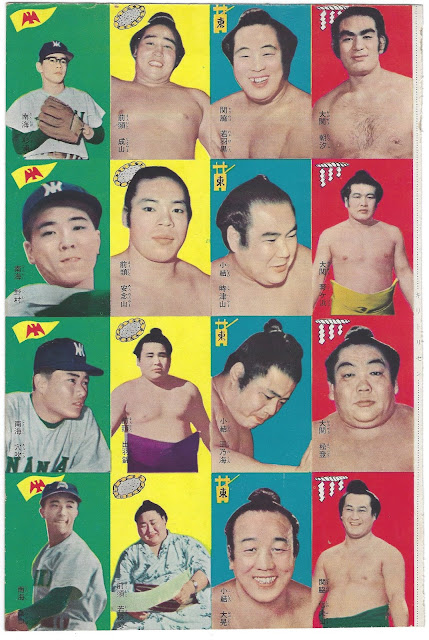 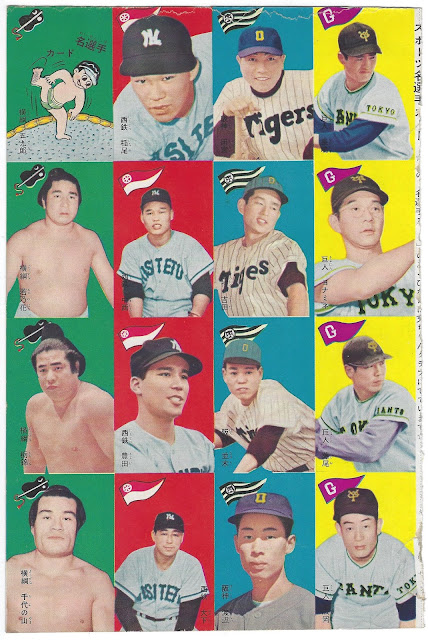 Thanks for stopping by and have an awesome weekend!
Posted by SumoMenkoMan at 10:55 PM