Wow, I did not expect to take that much time off of blogging...almost two months.  Work just happened to get really crazy with a project we are working on right when a lot of things started opening back up as we all start getting vaccinated.  Hence, I have not had a chance to sit in front of my computer much, nor work on many hobbies.  Anyway...am hoping to be back blogging once or twice a week.

I've been clearing out my sets that need checklisted, documented in my book, and then put in binders.  This M-Series set has been staring in my face since the pandemic...I purchased it during quarantine and have now just finally got around to documenting it.  It's a beauty and the first, and only, time I have seen any menko from this set indicating how rare it is out there.  One of the main reasons it is so rare is it was made in the middle of World War II.  1944 in fact.  How it survived all these years is a wonder and we'll never know.  However, we can now document it as the M441: 1944 Gunbai Math 2-3 set.  The drawings of the rikishi are crude, but totally fit in with the austere war conditions in Japan during the time.  The backs have an image of the judge's fan, or gunbai, and are printed in a vivid, red ink.  Inside this gunbai are the wrestlers names across the top (read from right to left) as well as birthplace, height, weight, favorite technique and stable information in the gunbai.  Also common during this time was a math equation and indicates it could have been issued in a children's school magazine.  They measure about 1 1/8" x 2 7/8" so a bit on the small side. 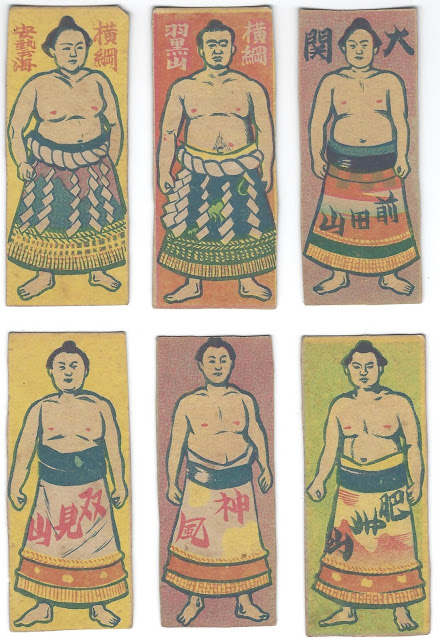 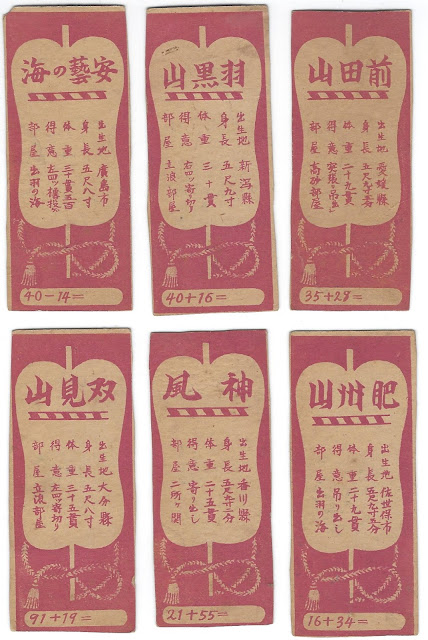 I hope everyone has a great week!  Sayonara!
Posted by SumoMenkoMan at 2:00 PM