When Sumo Wrestling Came to Hawaii in 1993 - Akebono, Konishiki, Musashimaru

In the summer time between tournaments, rikishi go on traveling tours around the country (and around the world) to give fans a chance to interact with the wrestlers and to promote the sport.  It has been a while since they have come to America.  In fact, the last time they were here was in 2009 in LA.  However, once upon a time when Hawaiian wrestlers were dominate in the sport, they went to Hawaii for a special two-day tournament.  In June of 1993, dozens of wrestlers descended upon the Hawaiian Islands to give the fans a true taste of this ancient sport.  And since Yokozuna Akebono, Ozeki Konishiki, and Sekiwake Musashimaru were at the top of the sport, this caused slight hysteria across the islands.  Spoiler alert, according to the July 1993 edition of Sumo World, Sekiwake Musashimaru was the tournament winner as described in the attached article.  Coincidently, the massive POG craze was going on at this time as well and this piece of history was captured on a set of POGs.  I got out of cards right when the POG craze hit so I missed getting absorbed in the collecting frenzy and missed collecting some great sets.  Luckily I was able to recently pick this up and will be cataloguing in future editions of my book. 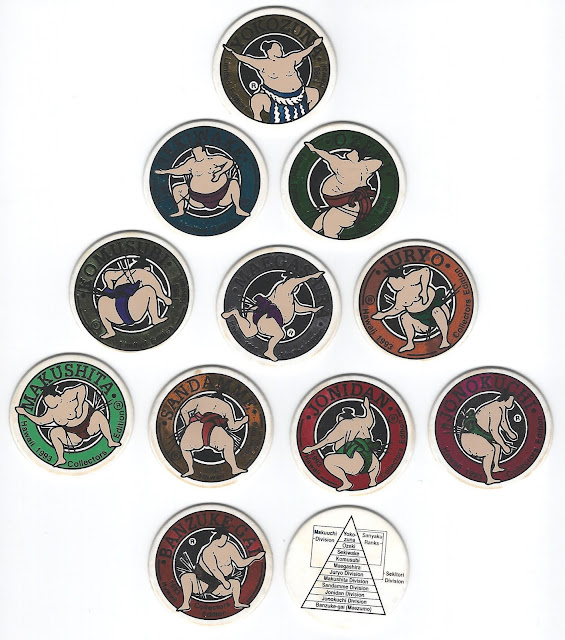 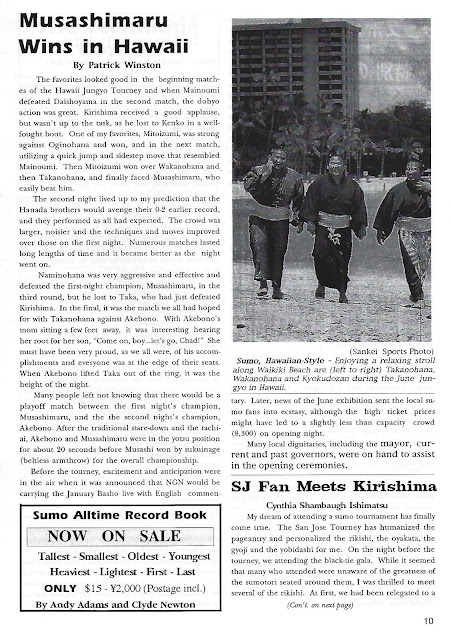 These three rikishi were so famous that it inspired the famous Israel "IZ" Kamakawiwa'ole (Of the "Somewhere Over the Rainbow" fame) to write a song about them called "Sumotori".

Did anyone else get caught up on the POG craze?
Posted by SumoMenkoMan at 8:00 AM