The late 1950s had several multi-sport sets that captured some of the most popular sumo and baseball stars of the time. Hugely popular in the late 1950s in sumo wrestling was Yokozuna Wakanohana and in baseball, Shigeo Nagashima. Both of these athletes dominated newspapers, magazines, and the attention of young children. Included as free giveaways in the Shonen series of children's magazines in 1958, these stamps show a young Nagashima in his Giants uniform and a seasoned Wakanohana who had just been promoted to Yokozuna. Both of these individuals would rise to the some of the highest levels of respect within their sports and these stamps capture them as athletes striving to make names for themselves.  Now catalogued as the Z581: 1958 Shonen Stamps, these extremely rare stamps are printed on thin paper and were meant to be licked and stuck onto something or inside something.  Thanks for stopping by and stay safe out there! 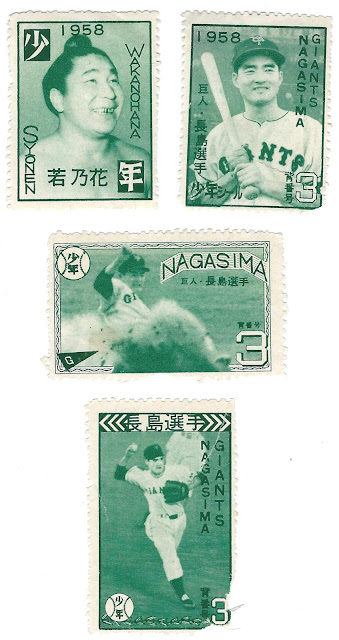