In 1980, if you were living in Japan, sumo wrestler Chiyonofuji would have been a household name.  His face was plastered on everything it seemed.  Although he hadn't been promoted to the highest rank of Yokozuna yet, it was clear he was headed there.  Finding trading cards of him from this era is somewhat of a challenge and collectors are really limited to mainly these playing cards, or trump cards as they are called in Japan.  These were annual sets released at the Kokugikan and captured 52 of the top ranked wrestlers within a playing card set.  This 1980 set is especially interesting as it has 6 current or future Yokozuna in it as well as 2 of the most popular wresters from the 1970s and 1980s. Lets dive into a few of the wrestlers featured in this set. 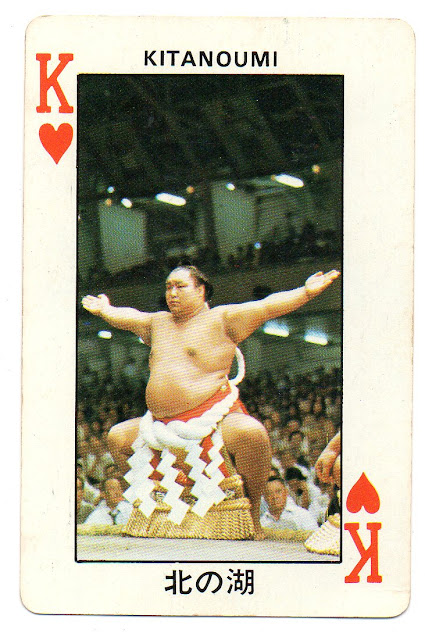 Kitanoumi was a beast.  He was the youngest ever Yokozuna at 21 years of age when he was promoted in 1974 and eventually served as the chairman of the Japan Sumo Association.  In 1980 he was on the downhill slop of his career but still managed to eventually reach 24 tournament wins! 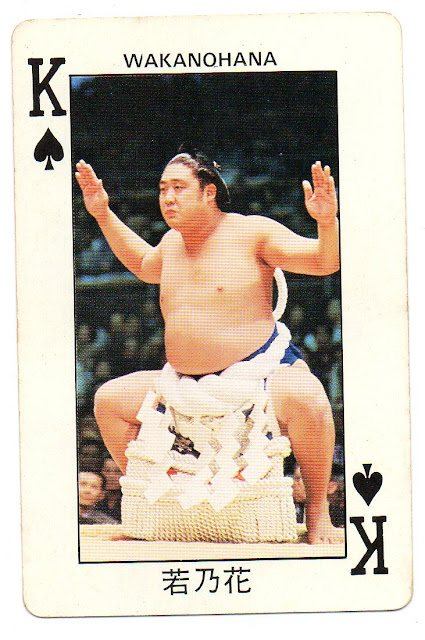 Wakanohana was a pretty dismal Yokozuna and won only 4 championships in his career.  Why the sumo association decided to promote to Yokozuna after posting two runner up championships is baffling.  Normally promotion to Yokozuna occurs after two back-to-back championships.  He had a storied life after his active wrestling days were over and eventually he married a girl he met while she was working in a bar. 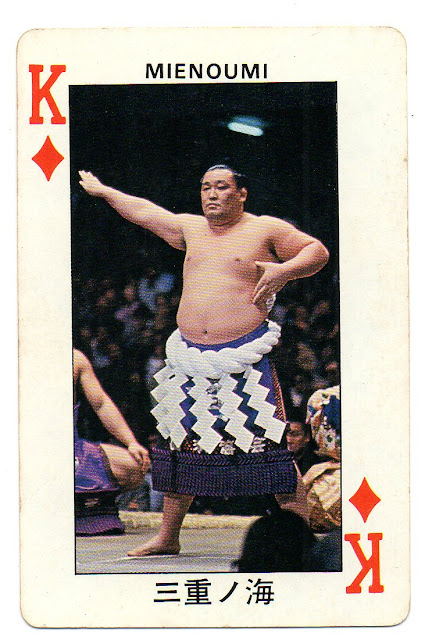 Maybe even more disappointing than Wakanohana was Mienoumi as a Yokozuna.  He managed only 3 tournament wins and retired a little more than a year after his promotion.   Why he was promoted after two runner up championsips is equally as baffling as Wakanohana.   Although, from a card collectors standpoint, capturing his as a Yokozuna on a card is pretty rare and so its exciting to see him here as the King of Diamonds.  Mienoumi eventually became head of the Japan Sumo Association and became director of the Sumo Museum after he stepped down from that position. 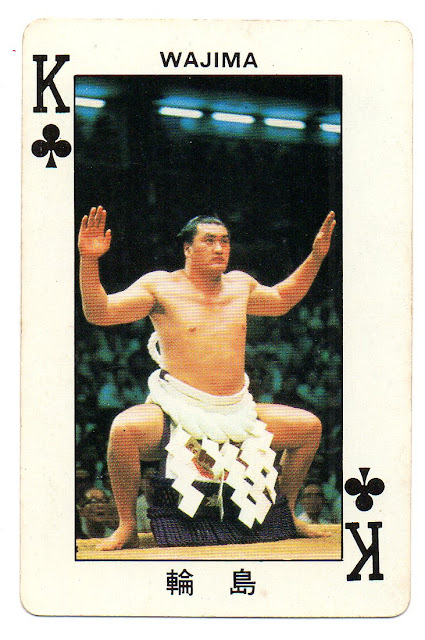 Wajima had a great career as a wrestler, but fell into debt after retirement.  He eventually became a pro wrestler with Giant Baba's promotion to try and pay off those debts.  Wajima is still alive and kicking although not in great health. 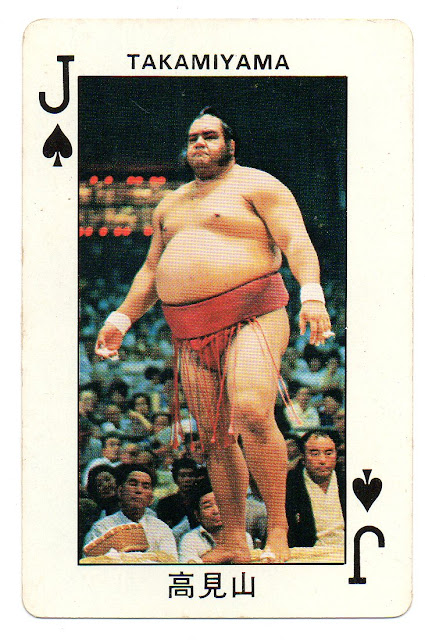 Takamiyama (Jesse Kuhhaulua) is forever etched in the pages of sumo history.  As the first foreign winner of a tournament, he gained international fame.....as popular, if not more popular than most of the Yokozuna he fought.  In 1980, he had settled in to being a rank and filer but still would wrestle for another 5 years before retiring and becoming a coach.  If you don't know his story, I'd recommend clicking on the link above and reading about it.  It is very inspirational. 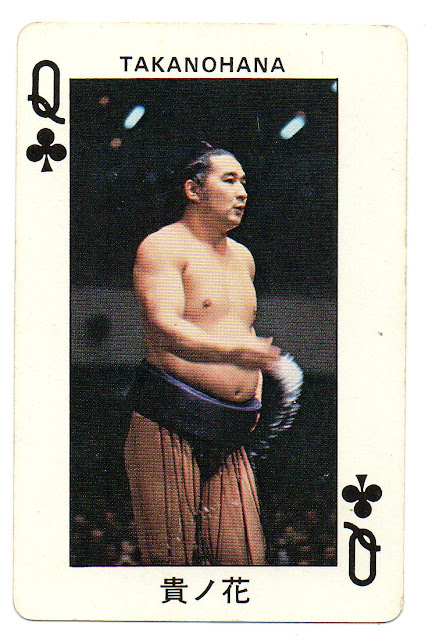 Takanohana was sumo's pretty boy for most of the 1970s and early 1980s.  He was handsome and had a fairly athletic build compared to most wrestlers, however, he couldn't obtain the elusive rank of Yokozuna and stalled out at Ozeki.  He married a beauty queen and they had two handsome sons who eventually went on to become Yokozuna themselves...the first time in history two brothers were Yokozuna.  In 1980s he was nearing the end of his storied career. 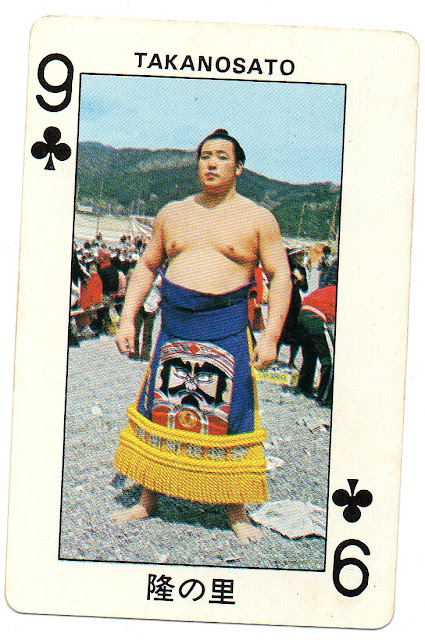 Takanosato was relatively old when he was promoted to Yokozuna.  Seen here as a Maegashira-ranked wrestler in 1980, he wouldn't obtain the coveted rank until 3 years later.  Because of his age, he was rather disappointing as a Yokozuna with only 4 championships to his name. 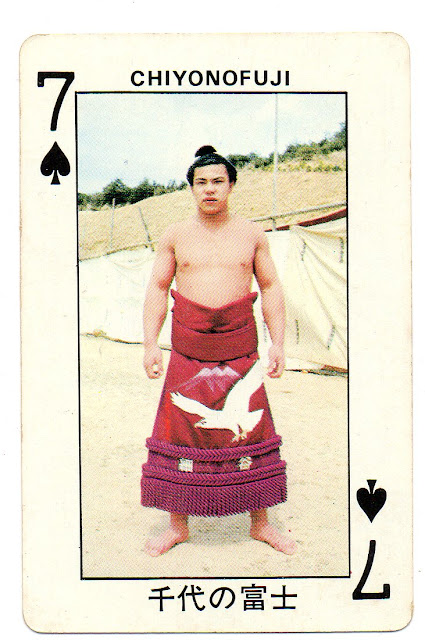 We started off talking about Chiyonofuji and we'll end with him.  Here he is as a Maegashira, but a year later he'd be Yokozuna.  He was extremely skillful, handcome, chiseled and had an amazing physique.  He eventually went on to win 31 championships.  Rumor has it that Chiyonofuji's victory over Takanohana (shown above) caused him to retire.  Years later, Takanohana's son, Takahanada, was the reason Chiyonofuji retired after Takahanada beat him.  What goes around comes around I guess.


Here is a picture of the back of the playing cards. 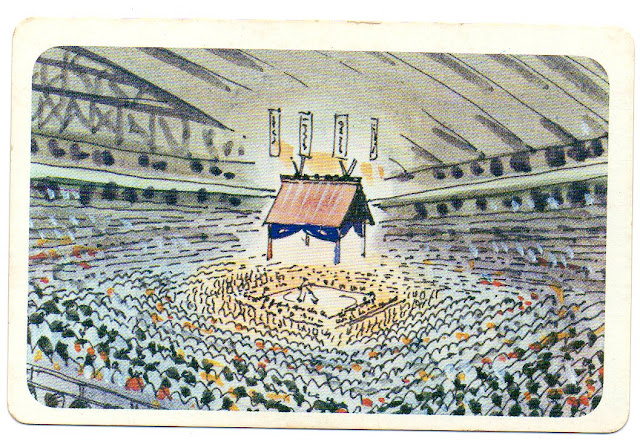 Thanks for stopping by!

Posted by SumoMenkoMan at 9:52 AM